Hollywood's Mexico -- not to mention the Mexico of Italy's spaghetti westerns -- is a projection of fantasies and impulses that would probably seem inappropriate or politically incorrect presented in a native context. Producer David O. Selznick and screenwriter Ben Hecht are up-front in declaring director Jack Conway's film a fantasy that has little to do with the recent history of Mexico. That could be a tip-off that it actually has something to do with the recent history of the United States, though not with Pancho Villa's relations with that country. You'll see nothing here about his raid across the border or the punitive American military expedition that failed to hunt Villa down. The U.S. comes into the picture only as Villa's home during a temporary exile. But the film was made for American audiences first, and my hunch is that, as a Pre-Code movie, Viva Villa! is saying something about America that couldn't be said -- especially at Irving Thalberg's M-G-M -- in an American setting. What seems to be said is something simple. In Hollywood's Mexico, for instance, it can be shown bluntly that the rich hate the poor, and that the poor hate them back. The Mexican elite (identified in the introductory titles as a holdover from Spanish rule) openly redistributes wealth upward, confiscating peon land and putting it in the hands of the wealthy. Those who complain, like Pancho Villa's father, are tortured and killed. Papa Villa specifically receives one hundred fatal lashes for asking only to keep a symbolic handful of earth after his land is confiscated. His body is left to rot as a warning to other dissidents, but his son flees into the wilderness and grows into Wallace Beery. In keeping with Beery's star persona, Pancho Villa is part monster, part overgrown kid.

Beery's Villa is a ruthless avenger of the poor. Taking a town in the wake of a mass execution of peons, he stages a macabre trial of the regime's judges by dragging the fresh corpses into the courtroom to serve as their jury. He's really little more than a bandit until he meets Francisco Madero (Henry B. Walthall), a gentle visionary who hopes to build an egalitarian society founded on land reform. Villa is captivated by the vision, but disagrees with Madero on the means for realizing it. After Madero rebukes him for his latest atrocities, Villa patiently explains that revolutions can't be made entirely with love -- you need hate as well. He's willing to be the dark side of the revolution while Madero embodies the good side, but the implication is that Madero will be helpless without him. And so it proves, as crafty General Pascal (Joseph Schildkraut) plays the two against each other and exploits Villa's own excesses -- he robs a bank to get his own money out because he arrived minutes after closing --  to drive the bandit chief out of the country. Pascal promptly joins a coup against Madero to thwart his land-reform agenda, provoking Villa to return from exile and raise an army in record time. Without Madero's restraining example, Villa amps up the atrocities, earning him the scorn of the Castillos, Felipe (Donald Woods) and Teresa (Fay Wray) -- aristocrats who had supported Madero but recoil at Villa's methods. When Felipe calls him a beast, Villa answers, "Yes, the poor was always the beast, but now we're not afraid any more." Soon afterward, he tries to force himself on Teresa, who'd given him mixed signals earlier in the picture, and in the consequent melee one of his men shoots her to death. Felipe swears vengeance and fulfills his vow at the end, but not before Villa has avenged himself on Pascal, who had earlier forced him to beg on his knees for his life, by smearing him with honey and feeding him to ants, and pushed through Madero's land-reform legislation -- after which he retires to a short private life. 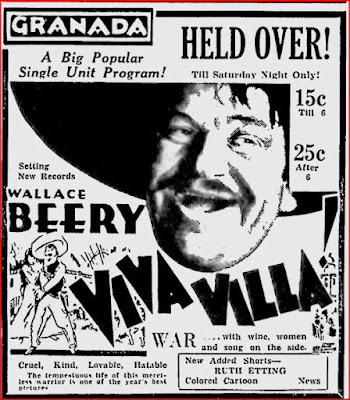 Like its protagonist, Viva Villa! is a film of contradictory impulses. It's close kin to the dictator/mob rule/vigilante fantasies rampant on movie screens in 1933-4, from Gabriel Over the White House to This Day and Age and many others. But it's also a Wallace Beery star vehicle, if also the most ambitious of all such undertakings, and that requires Pancho Villa to be a sort of lovable oaf as well as a ruthless revolutionary realist. He's a man of appetites, especially sexual -- he aims to "marry" almost every woman he sees and he doesn't often take no for an answer. But there's still something childlike about him in a possibly reassuring way that conveys that he doesn't really mean any harm no matter how many people he kills. Embodied by Beery, he seems pretty obviously a fantasy of what Beery's target audience would do with absolute power. That comes with some condescension from the filmmakers, who have fun with Villa's failure to comprehend why the men who've printed 100,000,000 pesos of his inflationary currency refuse to be paid with those same bills. They also allow Villa to play the sort of sap Beery often portrayed. This comes through in his dealings with an American reporter (Stuart Erwin) who browbeats him into adopting risky tactics for assaulting a town because he'd wired home that Villa had already taken the town that exact way. This seems incredibly implausible even in a Hollywood fantasy, though it might have been more convincing had the more relentless motormouth Lee Tracy played the reporter as he'd been cast to do until he was expelled from Mexico, supposedly for urinating off a hotel balcony in an incident that also cost the picture its original director, Howard Hawks. The point, however, isn't so much that Villa is a sap but that he's suggestible, open to the influence of good people like Madero as well as mostly harmless hucksters like the reporter. Beery's Villa is not the uncompromising ideologue of counterrevolutionary nightmares, but a simpleton Cincinnatus, interested less in power than in crushing injustice by all means necessary. To their credit, the filmmakers end the film on an ambiguous and darkly humorous note as the mortally-wounded Villa asks his reporter friend what his last words were. The reporter suggests a final appeal for forgiveness, to which Villa responds, "What I done wrong?"

Viva Villa! doesn't quite look complete. Some shots end abruptly -- especially Beery's attempted rape of Fay Wray, though there may also have been more of Villa's sojourn in America than we see today -- but I don't know whether it was edited badly for its original release or censored for a 1938 reissue under the Code Enforcement regime. But if what I saw was what they saw in 1938 that's still an exceptionally violent and fairly bawdy film for that bowdlerized time. Americans may have feared mass violence in their own country during the Depression, but Mexico provided them an imaginative safety valve for bloodthirsty fantasies of revolution and civil war in which the oppressors of the poor got what was coming to them -- as long as the oppressor of the rich got his comeuppance, too. That makes the fantasy harmless -- maybe....

Posted by Samuel Wilson at 6:50 PM