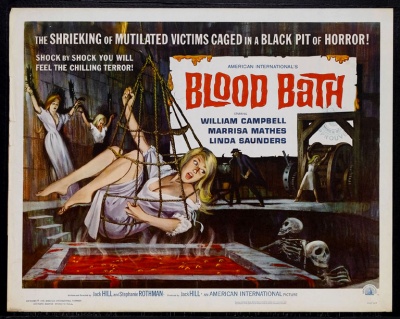 With hyperbole rare for a non-controversial subject, Wikipedia says of Blood Bath that it "had possibly the most convoluted production history of any horror movie ever made." Over three years, under the worried stewardship of Roger Corman, a Yugoslavian-American spy picture called Operation Titian transformed first into a Jack Hill slasher picture, then into a Stephanie Rothman vampire movie. The finished product is reported by Wikipedia to be 69 minutes long, but more footage was added so the picture could fit into a conventional TV time slot, while the version available for streaming on Netflix is a minimalist 61 minutes. It must have seemed far out of date by the time it was released in 1966, being in black and white and burdened with comedy-relief beatniks. But despite everything it has its moments. 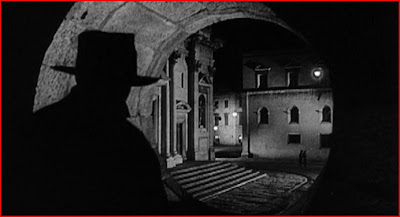 Confusion sets in early after a stylish opening that appears to establish the location as somewhere in Europe. Yet the story seems to be set in Venice, California, rather than Venice, Italy. Saying otherwise, you could still explain the beatniks by calling it an artists' colony for expatriate Americans, but you'd have a harder time explaining the beaches facing the Pacific Ocean. Some scenes of stalking and chasing were shot in Europe for Operation Titian, and one of the stars of the first draft, William (Squire of Gothos) Campbell, returned for the California shoot. Whatever he was in Titian, he's now the painter Antonio Sordi, the envy of his pretentious beatnik rivals and lately acclaimed for a series of paintings portraying women in their death throes. Little do the connoisseurs realize that these scenes were modeled from life ... or death. But Sordi is no mere madman, as he had been in the Jack Hill version. He is a vampire, an accursed Renaissance artist haunted by the taunting spirit of his original muse. Sordi's vampirism was Rothman's idea, but Campbell didn't come back for the third round of filming, so Rothman films transformations that allow another actor to play the grey-haired, puffy-faced bloodsucker. The vampire idea sits well, however, with a storyline filmed by Hill in which Sordi falls in love with a woman he doesn't want to kill. One of Campbell's scenes with the girl (Linda Saunders) can even be taken, in the new context, as a riff on Nosferatu. During a picnic, the girl struggles to slice a loaf of bread. Watching a vampire movie, you expect her to cut herself and tempt Sordi with her blood, but Sordi himself seems to anticipate that possibility and snatches the bread and knife from her before any mishap can occur. 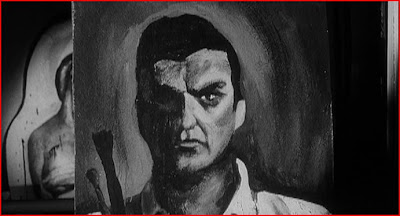 Portrait of the Vampire as an Artist 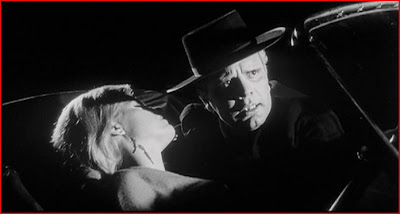 According to Wikipedia, while Rothman shaped the final story, most of what we see is Hill's work. Before reading the reference, I assumed the beatnik scenes were Hill's because Hill protege Sid Haig is one of the beatniks. The joke is that the beatniks are vacuously pretentious, led by Max (Carl Schanzer), the inventor of gun-toting "quantum painting" and Sordi's rival in the local art market. The beatniks squabble over "formalism" and go into raptures over random splashes of color. In his one scene with the beatniks, Campbell contemptuously squirts ketchup from a bottle onto Haig's newest work, and Haig feels the picture's been improved. Oddly, the beatniks emerge as quasi-heroes in the final version, temporarily rescuing the Saunders character from a vampire attack while Max chases the monster and seems to defeat him. The beatnik material seems to brand Blood Bath as an AIP product, evoking memories of A Bucket of Blood in particular because of the art-horror angle, but at this late date it looks like a case of AIP nostalgia for itself. 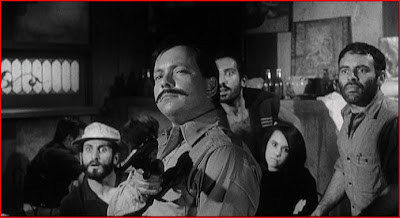 Highlights include most of the stalk and chase scenes, including a Felliniesque encounter with masked revelers that has Sordi briefly confronting a fake vampire and a man in a skeleton costume innocently dragging Sordi's target from her hiding place; the beach chase scenes with Campbell's daywalking stand-in; the impressionistic flashback to Sordi's origin, climaxing in the desert as the camera hurtles back from the painter's easel to reveal corpses all around him. Dare I suggest, by the way, that Blood Bath's final concept of a vampire cursed by a witch and obsessing over a presumed reincarnation of his lover anticipates some elements of Barnabas Collins, who first appeared on Dark Shadows the year after Blood Bath finally appeared? 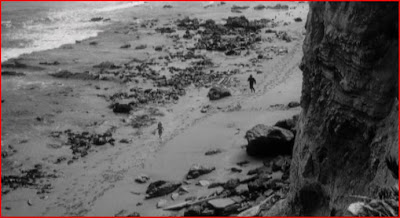 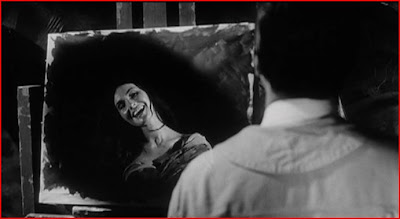 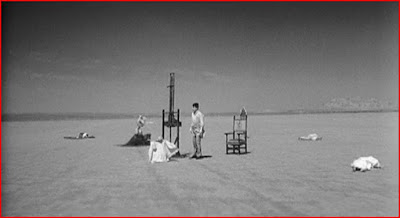 The lowlight, regrettably, is the out-of-nowhere EC Comics finish in which those victims of Sordi whom he'd preserved as pseudo-sculptures come to vengeful un-life. However you distribute the hits and misses, the film is a mess, and no one is more to blame for that than the hard-to-please Corman, who may have been too conscious of rapidly changing tastes and too desperate to adjust. The film we have is a shambles of potential, and I wouldn't mind someone trying to remake it as a more coherent whole. It wouldn't be hard.
Posted by Samuel Wilson at 11:24 PM

saw this on Netflix, couldn't finish, just gave up

William, I suppose I cheated by only watching 10-15 minutes at a time at coffee shops. It was easier to take that way.

We are happy to announce the arrival of Cinema Mama, the most comprehensive and academic website to understand the Indian Cinema, especially Telugu Cinema