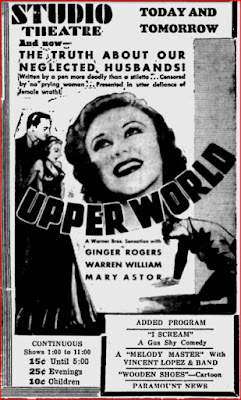 As the Pre-Code era neared its close and Code Enforcement closed in, the tide was turning against Warren William. Check out the newspaper ad to the left. William is top-billed in the actual film, but yields to Ginger Rogers, erstwhile Warner Bros. gold digger returning in triumph for two 1934 pictures, in the print ads. Setting up Upper World as a Ginger Rogers movie only adds to the slightly Hitchcockian nature of the story conceived by ace playwright Ben Hecht. Roy Del Ruth's picture is no thriller, but it puts William in the position of the basically decent guy who makes some bad decisions and gets deeper and deeper into trouble for them. Upper World sets the tone for another change in the Warren William screen persona. He made good playing a high-powered, high-pressure personality of heroic or antiheroic drive, a figure whose ruthless excess might well be what a depressed country needs. He went astray in pictures like The Mind Reader (as good an entertainment as that one is) and Bedside (just plain bad) that reduced him to a hollow fraud, someone seemingly lacking the internal resources that would justify his bluffs or impostures. For Upper World and his role in the Kay Francis vehicle Dr. Monica later in 1934, William becomes essentially a lonely husband who goes bad, to whatever extent he does, in part because of wifely neglect.

In Upper World William is another captain of industry, railroad tycoon Alex Stream. He's negotiating a big merger that will enrich him further, but he still finds time to play with his young son and the boy's imitative railroad toy set. He'd like more time with his wife (Mary Astor), but she's too involved in playing the society maven. Alex blows off steam on a speedboat, and during one day on the water he manages to fish showgirl Lily Linder (Rogers) from drowning. He grows fascinated with her, going to the show to watch her lead a chorus in a late blast of Pre-Code gusto, "Shake Your Powder Puff," and taking her out to dinner after the Mrs. ignores their wedding anniversary. After one such tryst, his chauffeur (a randy Andy Devine) is caught speeding by a policeman (Sidney Toler). The impatient Alex tries to intimidate the cop with class, but the Officer Moran isn't impressed. Angry, Alex uses his pull with the police to have Moran demoted and transferred. Alex doesn't realize that he's just flung a karmic boomerang toward the horizon, but it'll come back to him with a vengeance later.

Lily has a boyfriend/manager, Lou Colima (J. Carroll Naish) who gets wise to Alex and quickly figures out a blackmail angle. He confronts Alex at Lily's apartment, but the proud tycoon won't knuckle under. He punches Colima to the floor, and the enraged thug pulls a gun. He fires, but kills Lily instead. Ginger Rogers, billed as the star in some advertising, makes her exit about halfway through the film, Psycho style, and it's definitely unusual to see a Rogers character get whacked, even this early in her career. In any event, Alex grabs Lily's gun and kills Colima. Finally, panicking, he tries to arrange things so that the two corpses will appear to have killed each other, but he doesn't notice that Patrolman Moran has been lurking outside Lily's building, noting a parking violation by Alex's car. Noticing Alex leave the building, Moran grows more suspicious. He takes it upon himself to go above his superiors' heads to investigate the shootings. The more he suspects Alex, the less Moran trusts anyone to take his suspicions seriously, even after he catches Alex bribing a janitor (John Qualen) to forget about ever seeing him in the building. When his superior accidentally (?) destroys an important piece of evidence, Moran goes berserk, accusing everyone of conspiring on Alex Stream's behalf. Thrown in jail himself, Moran's only chance is to talk to the ever-vigilant press. Sensing a big society scandal, the reporters listen to the paranoid patrolman and invade the Stream home during a dinner party to ask Alex for his fingerprints. They may have no right to have them, but Alex can hardly say no without admitting something to hide. The noose tightens....

Upper World ultimately opts for a cop-out finish without even giving us the big trial scenes we'd expect. There ought to be a courtroom showdown between Stream and Moran, but the picture leaves the cop in jail. That's too bad, because if Ginger Rogers stole the movie from William in the advertisements, Sidney Toler steals it from him on film. Moran is a brilliantly conceived antagonist, someone who's right for all the wrong reasons, and the plodding, piggish manner that made Toler such an obnoxious Charlie Chan, seems just right for the role with a dash of righteous self-pity thrown in. In a modern movie Moran would probably have gone completely mad and tried to kill Stream before the picture ended. Unfortunately, Upper World ends in a manner unhappily reminiscent of Bedside, with an abject Warren William somehow forgiven by Astor, herself chastened by the realization that her neglect of hubby made him go astray. William may be overshadowed by Rogers and Toler, but he's actually quite good in a role nearly the opposite of his Employees' Entrance character. While that entrepreneurial superman disdained family intimacy, Alex Stream wins sympathy for his simple craving for that same intimacy. Upper World works as long as you feel that Alex doesn't deserve the doom he blundered into or the reckoning Moran has in store for him. If it does work, and I think it does, all the credit goes to Warren William in what was probably his last great Pre-Code role.


Believe it or not, TCM doesn't have the Upper World trailer online. Well, you can't have everything.
Posted by Samuel Wilson at 11:31 PM