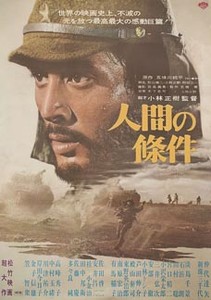 Once upon a time in Hollywood, Erich von Stroheim wanted to release a literary adaptation that ran more than eight hours, but Hollywood shot him down. About eighty years later, English-language audiences happily sat through nine hours' worth of literary adaptation from Peter Jackson, who figured out that reasonable spacing between installments (Stroheim had anticipated audiences coming in for two consecutive nights to get through Greed) made the whole easier to swallow. Jackson's idea was no innovation, however. Back in 1959, the Shochiku studio released Masaki Kobayashi's adaptation of Junpei Gomikawa's novel in three parts between January 1959 and January 1961. The Human Condition clocks in at 9 hours, 34 minutes, and I first learned about it from a Guinness Book of World Records that listed it as the longest film ever made. I'm not sure if that's an accurate description given the three-episode format (and each episode is divided into halves by an intermission), since to my mind the longest feature film would be the one that requires you to sit for the longest stretch at one time. In any event, Human Condition and Lord of the Rings are two of a kind, if only in format, but that should be enough to shame people who hesitate to try the Kobayashi due to its length. You don't have to watch it all at once, and as far as I know no one ever has. But it's definitely worth watching as a critical epic of the Japanese occupation of Manchuria during World War II.

The Human Condition is mainly the story of Engineer Kaji (Tatsuya Nakadai), who avoids military service at the height of the war (1943) by taking a management job at a Manchurian mining camp. Kaji is humane and conscientious to the point that colleagues and military people think of him as a "Red." A certain obsessive contempt for "Reds" among the Japanese is a point of identification for American audiences, and while Kaji himself sometimes expresses faith in a socialist future, the film itself (I can't speak for the novel) takes a less optimistic viewpoint. From an early point, Kobayashi establishes that Kaji's good intentions will benefit him and his Chinese charges very little. He is given a work crew of POWs who've been crammed into cattle cars and starved en route to the mind. In the film's first big set piece, the survivors surge toward a grain wagon like a horde of zombies despite Kaji's warning that gorging themselves so soon could be fatal. He's forced to use a whip to drive the wretches away, looking no less the slave-driver than his less humanistic comrades.

The first installment puts Kaji at odds with the Japanese military police, who despise his humanism. This conflict climaxes when the authorities accuse him of allowing POWs to escape and try to torture a confession out of him. Not for the last time will Kaji suffer for his country's sins, but the first installment ends with him jumping from the frying pan to the fire, resigning his mine job to join the regular army.

The second installment (released in November 1959) puts him through a cruel boot camp, tormented by veterans who assume a license to abuse rookies both physically and psychologically. Far from folding like a soft civilian, Kaji thrives in adversity while others collapse and kill themselves. He proves a better soldier than most, becoming a leader after his unit is decimated during the Soviet invasion of Manchuria in August 1945. The biggest battle scenes of the story take place at the end of the second installment, and they are pretty hellacious. The front-line Japanese are hopelessly outgunned and barely barricaded against the Soviet tank and artillery assault, and the actors look authentically imperilled by huge explosions going off around them. Somehow Kaji survives this first wave, sustained in large part by his determination to reunite with his wife Michiko (Michiyo Aratama).

The final installment sees Kaji and the other suriviors desperately trying to cross Soviet lines and reach Japanese-controlled territory, acquiring a motley band of civilian refugees along the way. Of this Stagecoach-like assemblage a prostitute, despised by the others, proves the most hardy and the only civilian to survive the ordeal alongside the soldiers. Her reward is to be killed (and raped?) by Chinese partisans who find the band squatting on their farm. Kaji's crew encounters foolhardy die-hard soldiers and a refugee village of lonely women and one old man, where the other soldiers satisfy longstanding urges while Kaji continues to pine for Michiko. When a Soviet unit stumbles upon the village Kaji is ready to make a last stand, but at the urging of one of the village women he surrenders to the Russians. To this point he had an idealized view of the Russians as progressive Socialists, dismissing atrocity stories as the transgressions of the usual bad apples. Now he sees them exploiting and abusing helpless prisoners, whom Kaji feels should not be blamed for Japanese atrocities, and hypocritically granting privileges to the same vicious officers who, if anyone does, deserve to face retribution, all in order to meet the usual unreaslistic production quotas. In prison, abused by Japanese and Russians alike, Kaji's idealism is exhausted at last. Ever resourceful, he manages to escape, but by now, despite all his righteous humanism, he has become everything he never wanted to be, a war criminal and a cold-blooded murderer of his own kind. At the same time, he remains self-consciously self-denying to an ultimately insane degree. Having stolen a dumpling from a Chinese village and kept it despite a beating, the starving Kaji refuses to eat it, saving it as a present for Michiko, whom he still expects to meet again but who may be long dead for all we know. To bring Greed back into the discussion, Human Condition closes on as grim and fatalistic a note as the Stroheim film, the wintry wastes of Manchuria comparing quite nicely to Greed's Death Valley.

Needless to say, Kobayashi's view (or the novelist's) of the human condition is not a nice one. The film is a damning indictment of Japanese militarism if not of Japanese culture in general, the sort of thing the Japanese got good at, perhaps of necessity, after losing the way, and the sort of thing we wouldn't see in American cinema until the Vietnam era. The title leaves open whether the film's sentiments are self-loathing or all-encompassingly misanthropic -- it's not The Japanese Condition -- and the story forces the question whether any individual can maintain personal integrity in the midst of a collective crime. Throughout, we can always say that Kaji is a better person than many other Japanese (or Russians, or Chinese), but he's still an exploiter and a killer who can't escape the brutalization he despises in others. Kaji has no rivals for main character status and the role is a huge challenge to which Tatsuya Nakadai (best known in the U.S. as the star or Kurosawa's Ran) responds tremendously. Purely on a quantitative level it's probably one of the greatest performances in film history, but it ranks qualitatively as well.

Cinematically, I could see how some might see The Human Condition as a sort of pretentiously middlebrow endeavor akin to Schindler's List. There's a certain self-important pretension to it all, a self-conscious classiness compared to the more concentrated outrage of a contemporary war film, Kon Ichikawa's Fires on the Plain. Kobayashi's eye for composition is perhaps too masterly, Yoshio Miyajima's monochrome cinematography perhaps too brilliant. But such pictorial ambition is probably appropriate to the filmmakers' epic intentions, and the results should prove indelible for anyone who makes the epic effort to watch it all. Human Condition is heroic cinema and indisputably one of the world's great war movies. It's worth nine hours or so of any true movie lover's time.
Posted by Samuel Wilson at 12:15 AM

"Needless to say, Kobayashi's view (or the novelist's) of the human condition is not a nice one. The film is a damning indictment of Japanese militarism if not of Japanese culture in general, the sort of thing the Japanese got good at, perhaps of necessity, after losing the way, and the sort of thing we wouldn't see in American cinema until the Vietnam era."

Terrific point Samuel and a master-class review, befitting this marathon landmark war film, surely one of the best of it's kind. It could certainly be convincingly argued that the film is too moralistic and overlong, but it's clear enough that Kobayashi's storytelling arc is extraordinary. And Nakadei as the idealist Kaji gives one of the great performances in Japanese cinema. My favorite Kobayashi is HARAKIRI, but this shattering war opus is unforgettable.

Sam, I had no problem with the length, especially given the three-part release, and whether Kobayashi strikes the right tone depends on what you think he's trying (or ought) to say. A few Japanese was movies I can think of (including Fires on the Plain) surpass Human Condition on a horrors-of-war level, but the source novel must have been more sweeping and the epic tone of the adaptation is probably appropriate. Of the Kobayashis I've seen (others are Kwaidan and Rebellion) I'd agree that Harakiri is his greatest work.