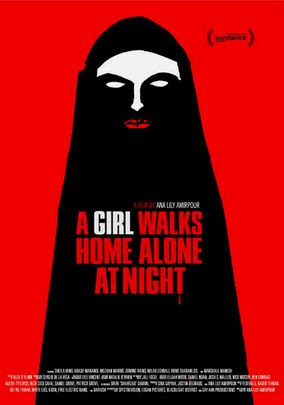 Ana Lily Amirpour was born in Great Britain and considers herself Iranian-American. To my knowledge, she's never set foot in Iran, yet she has made a movie in her ancestral Farsi and planted Farsi street signs on her southern California locations. Are we supposed to believe that it's taking place in Iran? Is it in some way a reflection on the Islamic Republic? Or is it just weird for the sake of weird? My last guess is probably the best one. Amirpour's "Bad City" is a dystopia -- there seems to be a municipal dumping ground for dead bodies near some busy roads -- but there's nothing oppressively Islamic about it. Instead, there's the blasphemy at the heart of the picture: under the chador that signifies modesty and obedience a vampire (Sheila Vand) stalks the city. This nameless vampire seems stuck in eternal late adolescence, happily claiming a skateboard as tribute from a frightened child. Apparently she was turned in the early 1980s, to judge from the music posters in her lair. That's nearly contemporary with the advent of the Islamic Republic, but maybe Amirpour just likes the music and fashions of that era. Apart from the vampire's mocking chador and the fact that everyone talks Farsi, Bad City looks pretty much like the America where the film was shot, complete with a hapless hero (Arash Marandi) with a leather jacket and a convertible to drive through the Lynchian industrial landscape.

Amirpour calls her film an "Iranian vampire spaghetti western." Check, check and .... well, no. Let's draw a line somewhere. That label really only underscores the movie-movieness of A Girl Walks Home Alone at Night. The Iranian-ness of the characters and dialogue and the genuine inspiration of the menace under the chador -- has Amirpour been accused of inflaming Islamophobia? -- only superficially covers the essentially derivative nature of the movie, giving it a pretentious novelty. Yet there is something sincere in her empathetic approach to her alienated protagonists groping toward intimacy amid squalor and danger. The vampire girl still longs for human company, for friends if not lovers whom she doesn't have to devour. There are plenty of people left over for that purpose: the pimps, the junkies and other dregs of society. Her victims eventually will include the hero Arash's father, but the father's addiction, fed by the pimp, has made Arash's life hell, if not more of a hell than life in Bad City is for anybody. Under more normal circumstances this killing might turn our hero against his undead friend, but in fact it's the moment that allows them both to cut their ties with the accursed place.

There's a slight echo of Let the Right One In/Let Me In in this creepy courtship, though A Girl Walks Home is ultimately more romantic, its vampire more in need of a soulmate than a servant. She sees something more in Arash than initially meets the eye when she finds him in a Dracula costume, having staggered stoned from a costume party, staring at a streetlamp. I don't think she's dumb enough to have though he might be like her that way, but she does seem to sense that he's like her in some way. She feels a similar sort of kinship with a prostitute who seems as much a victim of life as Arash, abused by the same pimp who claims our hero's convertible as payment for dad's drugs before the vampire kills him and manhandled by the dad (who has a past with her) until the vampire kills him. People like Arash and the hooker are the closest she'll get to the underworld of sociability with which most American vampires are blessed these days. In that sense, depending on your preferences, A Girl Walks Home is more of a proper vampire movie than many made these days, or at least more of a horror film than those fantasy films, even if it's still too romantic, in its despairing way, for some tastes.

It's a pretty slick piece of work, thanks largely to Lyle Vincent's black and white cinematography. If there's anything "spaghetti" about the picture its Amirpour and Vincent's proficiency in widescreen composition. It's mercifully light on effects, as Vand's vampire displays quite modest fangs and gets her voice mechanically modulated when she wants to scare people. Overall, it reveals Amirpour as a talent, but it seems just a little too calculated a revelation. It's paid off just the same, since she'll have an English-language cannibal movie with real stars out next year. Let's wait for that one before we say that Amirpour is really a talent to watch. For now she's done enough to get a second chance.
Posted by Samuel Wilson at 9:56 PM