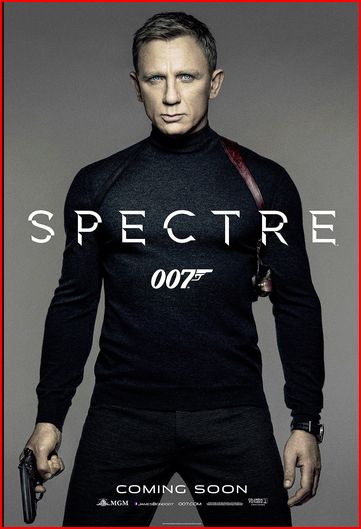 Almost from the beginning, James Bond moviemakers have challenged themselves to top their opening action scenes. For his second consecutive outing as a Bond director, and Daniel Craig's fourth in the star role, Sam Mendes raises the bar very high. Spectre opens with a spectacular sequence set during the Day of the Dead festivities in Mexico City. CGI-enhanced tracking shots follow a skull-masked man who proves to be James Bond 007 through the parading crowds, into an apartment for an apparent romantic tryst, then out and up to the rooftops to make a sniper's nest for an assassination that goes catastrophically wrong. But this is all build-up for the real set piece when Bond chases his quarry into a public square where a helicopter has landed to rescue the quarry. Bond invites himself on board and commences fighting with both the quarry and the pilot as the helicopter careens over the square above panicked multitudes fleeing below.

Mendes can't top it. He isn't helped by the fact that two commercial campaigns have spoiled much of one of the other big scenes, a mountain chase in which Bond must pursue kidnappers downhill in an eventually wingless plane. Nor is he helped by a team of four writers who seem collectively committed to evoking or echoing many franchise highlights -- the Day of the Dead stuff is reminiscent of Live and Let Die and any mountain chase begs comparison to On Her Majesty's Secret Service -- or else to making as generic a James Bond film as possible. They made very little effort to creating truly interesting villains, failing to notice that the most interesting of them is the one who probably ranks third and last with the audience and definitely falls in that slot for writers and director. Even then, this tertiary villain -- I presume people will rank him below the Big Bad and the Oddjob-style enforcer -- is hardly an original concept. Nor is Spectre's main plot. If the previous Mendes-Craig effort, Skyfall, reminded people of Christopher Nolan's Dark Knight with its nihilist villain and his I-want-to-get-caught scheme, Spectre unavoidably echoes the Russo brothers' Captain America: The Winter Soldier with its device of an all-pervasive surveillance system promoted by intelligence agencies but promoting the agenda of a shadowy criminal organization, not to mention an antagonist from the hero's distant past.

Yes, everything has to be personal in modern genre movies, and with that mandate in mind the Spectre writers have succeeded in utterly trivializing a canonical villain. They do this despite an awesomely suspenseful intro at a conspirators' conclave, in which the banal reportage of evil achievements is interrupted by the master's arrival. The master remains in shadowy silence at the head of the table, cocking his head slightly to listen to his advisers as others at the table wait in obvious dread of whatever he may say. But then he reveals himself as Christoph Waltz and the effect is ruined. Increasingly, Waltz seems like another Michael Madsen, capable of magic when touched by Tarantino's wand but otherwise insufferable. He's the second lazy casting choice for a master villain in a row following Skyfall's recruitment of Javier (Anton Chigurh) Bardem. It didn't use to be that you had to prove yourself a master movie villain in order to play a Bond villain; doing the Bond movie actually would punch your ticket. But Mendes and his producers have been as unimaginative in their casting as they have proved cliched in their plotting. If Waltz gives a puerile performance (his catchphrase, for Gad's sake, is "coo-coo") he's only sinking to the writers' level. The motivation his character is given is an insult to the actor, the audience, and to Ian Fleming, but it's just the sort of thing writers today think profound because it's, you know, personal. If anything, the personal is the opposite of the profound in this sort of picture. And it's not as if the Spectre writers can't do impersonal, though that's no credit to them. It's one thing to waste Christoph Waltz because you're not Quentin Tarantino, but making something out of Dave Bautista shouldn't have been so tricky, and yet the writers waste him also. He was cast, if I recall right, shortly after Guardians of the Galaxy opened last year to prove what filmmakers could do by tapping into some of Bautista's amped-up wrestler's charisma. Seeing that, the Spectre team somehow could only think of him as another sort of Oddjob and allowed him a single word of dialogue in the whole picture while playing a character who's named in the credits but not in the actual movie. Bautista does as much as he can to suggest some intelligence, or at least some powers of observation, in this mute brute, but he's not that good an actor yet and, left without the sort of cool gimmick that the original Oddjob got, he ends up an oversized yet empty suit.

That leaves the third villain, the new boss of both Bond and M (Ralph Fiennes). Literally third, "C" (Andrew Scott) is the new overlord of British intelligence and a collaborator in the global "Nine Eyes" program. C and M's dialogues play out whatever passes for a theme here, the theme being that granting certain individuals license to kill is ethically superior to automated surveillance and indiscriminate drone deployment. Apparently the personal factor makes the difference, as M explains: a license to kill is a license not to kill. It sounds like an almost Orwellian paradox but James Bond presumably proves the point every time. For what it's worth, Fiennes and the rest of the Bond support team -- Naomie Harris as Moneypenny and Ben Whishaw as Q -- are the clearest pluses this time around, all improving on their Skyfall work. Fiennes in particular follows in Judi Dench's footsteps (she gets a brief video encore here) as a more active M who even gets an important fight scene of his own. They are, in fact, more appealing characters than the lead. It's hard not to read Daniel Craig's now-infamous comments, since partly contradicted, about preferring suicide to continuing in the role into the role as he plays it in Spectre. He breathes life into a few quips but seems indifferent if not contemptuous toward the "personal" storyline linking Bond to Waltz's villain, while his required romances are by-the-numbers stuff. Whether he changes his mind about continuing or not, it may be time for EON Productions to be rid of him, if not the whole creative crew of his series, so we can have a true 21st century Bond who brings the appropriate enjoyment to his 21st century work. The three previous Craig pictures and the writers' dogged insistence on continuity trail and drag Spectre the way that little train of barrels handicaps Bautista's villain at a crucial moment. You can tell that Spectre was meant as some sort of celebration of all the things that make Bond pictures distinctive, but the result looks like an official pastiche if not a self-parody. It's still acceptable as a mindless popcorn movie with some good action scenes, but despite its pretensions it's nothing more than that.
Posted by Samuel Wilson at 9:03 PM

Unfortunately my week just wouldn't yield to allow me to see this, though your summary judgment in a superbly-written review is precisely what I expected. Yes if that opening sequence is as spectacular as you assert, then is is all downhill from there. Good to hear the supporting cast is impressive in any case.

This thing really did play out like a K-Tel version of Bond's greatest hits. What I found most disappointing was the escape and destruction of the secret crater lair. With that kind of set-up I thought we were finally going to get a 'Big Battle' sequence that we haven't seen since, what? MOONRAKER? Almost *gack* forty years ago. What we got instead kinda fizzles. And fizzles pretty badly.

I'd have to guess that Mendes is a comics geek, and, because he hasn't been given a chance to direct a comic-related movie, he decides to crib from blockbusters of that genre for his films. In a way, he ripped off Nolan again at the end of the film.

For me, Spectre is all right until the precise moment when Waltz emerges from the shadows at the SPECTRE conclave. From there, it's as if everyone knew that Waltz had (or had been given) nothing, and everyone except Fiennes, Harris and Whishaw gave up.