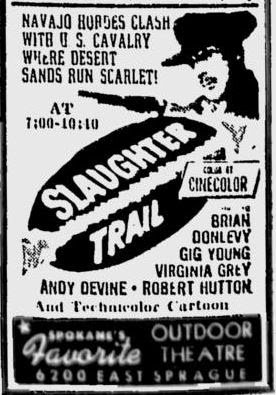 The 1950s were the golden age of the Hollywood western, marked by the flourishing of the "adult" or "psychological" western and the emergence of such master genre auteurs as Anthony Mann, Budd Boetticher and Delmer Daves. At the same time, a folkloric element to the genre persisted, finding expression in the title ballads that occasionally crowned but more often marred western movies. The three leading directors mostly avoided this balladic imperative (exceptions include Mann's Man From Laramie and Boetticher's Seven Men From Now) but the blockbuster success of both Fred Zinnemann's High Noon and Dmitri Tiomkin's title ballad convinced many a producer that ballads were essential to the western genre. The balladic imperative, an arguable inheritance from singing-cowboy films which in retrospect makes many films sound more corny than they really are, predates High Noon. At the start of the decade, producer-director Irving Allen conceived a balladic western with a sung-through narration. Slaughter Trail isn't quite a musical -- characters never "burst into song" and the major characters never sing -- but music is its life blood. Pop music is in its DNA. RKO, the studio that distributed Allen's film, hoped to exploit the participation as actor, singer and songwriter of Terry Gilkyson, who had recently written a hit song, "The Cry of the Wild Goose," that had been popularized by Frankie Laine, whose earlier hit "Mule Train" probably helped inspire many title ballads in the coming decade. However, Gilkyson did not write Slaughter Trail's title ballad, also known as "Hoofbeat Serenade." It's a tune that actually grows on you once you realize that Allen is going to stick with it all the way. Its refrain, as I remember it -- "You can only hear the sound/Of the hoofbeats on the ground/And the bandits ride around the Slaughter Trail" -- has an undeniable momentum, but some lyrics are dangerously self-referential, acknowledging that we're watching a movie "on the Cinecolor screen," or explaining how "we add tension to the plot" by introducing Indians. That doesn't match the often grimly serious action of the film, and the inconsistency of tone makes it hard to take any of it seriously.

The Slaughter Trail is where three masked bandits rob a stagecoach. One of them (Gig Young) has a laugh the victims will recognize anywhere, but one of the victims, Lorabelle Larkin (Virginia Grey) is actually in cahoots with the bandits. After her lover pretends to rough her up, Lorabelle continues with the stage to a cavalry fort presided over by Brian Donlevy, a late substitute for abruptly-blacklisted Howard Da Silva. The switch was probably for the best, except for the mistreated Da Silva, who was nonetheless one of the few character actors less plausible, as a typecast heel, in the hero's role than Donlevy himself. Meanwhile, the bandits make their getaway, stealing fresh mounts from some Navajo Indians to, as they say, add tension to the plot. The bandits, masks off, will eventually arrive at the fort, while the Navajos, then at peace with the whites, will demand that Donlevy find the bandits and surrender them to Navajo justice. Once Young betrays himself with unguarded laughter, and is recognized by the Navajos -- his gang had their masks off when they stole those horses -- a common western scenario is set up. Donlevy cares little for the bandits and seems to be falling for their moll, who herself softens in the company of the camp's children, but he must uphold the white man's rule of law against the Navajo demand for tribal justice. The fun thing about Slaughter Trail is how screenwriter Sid Kuller cares about this point of civilization only to set up the Indian attack he needs. The bandits, of course, are trusted to help fight for their lives, and they all die. Once Young goes down, the Navajos pretty much say, "We're done here" and go home. As far as we can tell they'll face no repercussions or reprisals, and Donlevy's ultimate unwillingness to enforce his principle punitively makes his earlier stand on it look silly and wasteful of both white and red lives. Yet the film doesn't treat his character as a fool. Instead, it keeps the door open for an eventual romance between the commander and Lorabelle Larkin after she rides off into the sunset for a period of penance and meditation. It's a realistically ambivalent finish at the end of a musical trail with insufferable stopovers for songs by Gilkyson and purported comedy relief from Andy Devine. His bits may have been funny when different comics first performed them ages ago, but Devine only leaves you wondering where exactly you'd seen them before. There are more minuses than pluses on Slaughter Trail but western genre buffs ought to check it out, if only because there's really nothing else like it.

Posted by Samuel Wilson at 9:54 PM