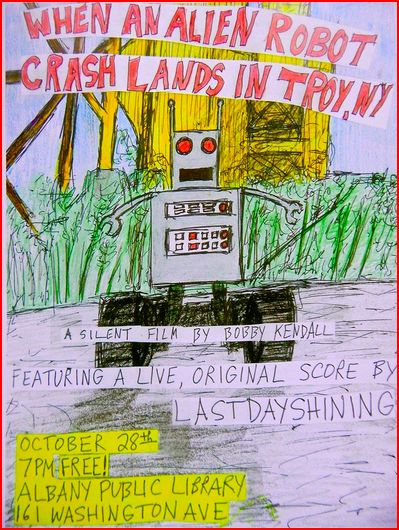 The poster above is an accurate representation of the protagonist of Bobby Kendall's silent film. On film, the alien robot is a charmingly preposterous creation. He's really no more than a cardboard frame built on top of a remote-control toy truck, with a control panel painted or drawn on his torso and a permanent expression of open-mouthed anxiety drawn onto his red-eyed face. His arms look useless, and when he uses them to touch or manipulate things, Kendall resorts to POV shots in which the arms are clearly being held in the director's hands. It's not to be taken seriously, after all, and the robot's abject simplicity makes him almost a 21st century version of the tramps and pasty-faced clowns of a century ago. He's a sign of Kendall's intentions, which are not, as far as I can tell, to make science fiction, but to get back to the essence of moviemaking. Silent films are about images and movement, and boy, does this film move.

In slightly less than an hour, Kendall follows his little robot from his crash site through the Collar City known as the Home of Uncle Sam, the place of my birth and my daily work. In the first section, "Terror," the robot struggles to find an exit from a post-industrial wasteland. In the second, "Wonder," he makes it into the city proper, exploring downtown Troy during one Saturday's outdoor farmer's market. In "Exploration" he tries to make contact with the planet's indigenous life, primarily an indifferent cat, and takes a treacherous trip through some parkland. In the final section, "Love/Freedom," he discovers the possibility of companionship and appears to find fulfillment as a child's toy.

The robot is Kendall's only special effect, but his dogged mobility brings this micro-budgeted film to life. Much of the film consists of long tracking shots following the robot as he scoots down roads of varying smoothness. These are impressive compositions, and they only get more so when the robot reaches populated areas. The Farmers' Market sequence is a modest tour de force as Kendall follows the robot through a crowded Monument Square and environs, leaving you wondering how the little guy doesn't get stepped on, or how no one ever sued Kendall for tripping over the thing. It takes you back a little to the early days of silent comedy when Mack Sennett's troupe would set up shop at public events and make comedy wherever they might find it. There aren't really any gags in Alien Robot, but it's still a sincere throwback to that century-old spirit. That comes through in the final sequence, when the robot, after watching two people enjoy a railyard picnic, befriends a little girl playing alone in her yard. There's something sentimental if not corny to this courtship, as the girl guides the robot with her little stick and finally does a happy dance as he circles elegantly around her. The closing high-five is a more modern touch, of course.

If the robot is in some ways a 21st century silent clown, in another way he's a humble embodiment of cinema itself. Seeing Troy from ankle-level and on the move from the robot's perspective must be like seeing things through a movie camera for the first time; the artifice automatically changing what we see as well as how we see it. Kendall has a few more tricks up his sleeve than tracking shots; like a good silent director he's also adept at montage, which he uses to establish the first terrifying, then wondrous strangeness of the cityscape. But when he's following the robot through the city he arrives at something like pure cinema. And on top of that, like many a silent film Alien Robot has an original score, which I was lucky to hear performed live by the band Lastdayshining, including Kendall. The score elevates the film, underscoring its often ecstatic sense of discovery and wonder. The combined effect is more artistry than amateurism -- which is more than I can say for that poster -- reminding us of what can still be done with limited resources and an understanding that cinema itself is a special effect. I don't want to exaggerate the film's virtues, but it definitely deserves a lot of appreciation, just as Bobby Kendall deserves encouragement in his future ventures.
Posted by Samuel Wilson at 10:47 PM

While I did chuckle at a couple of things, I looked at this more as a teaching tool, as the robot represented the curious child seeing the world for the first time.