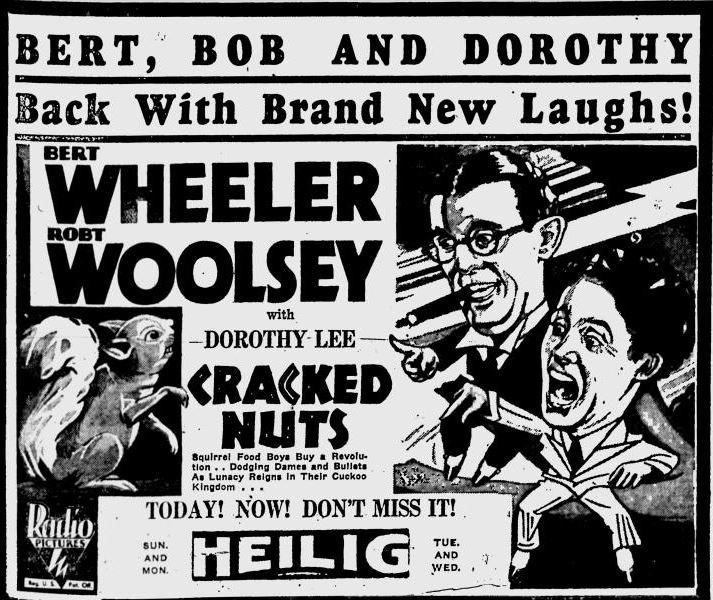 Most people who watch the Marx Bros.' Duck Soup (1933) probably suppose it to be a one-of-a-kind movie. But back in Pre-Code days, during the heyday of the "nut" comics who descended on Hollywood from the Broadway and vaudeville stage, it was a natural if not commonplace idea that putting the nuts in charge of a country was funny. Duck Soup, if anything, represents the end or, if you prefer, the culmination of this comedy subgenre. Before that, you had Million Dollar Legs, in which W. C. Fields ruled a nation by virtue of physical strength and wrestling prowess. And before that, you had Cracked Nuts, easily the least remembered of such films. The main reason for that is that its starring team of Bert Wheeler and Robert Woolsey, once arguably more popular than the Marxes, have been forgotten since Woolsey's premature death in 1938. They certainly were more prolific; after earning movie stardom with their supporting roles in the 1929 musical Rio Rita, the team starred in twenty features over the next eight years. It's something you wonder about, because their comedy hasn't aged well, which is the other main reason that Cracked Nuts is forgotten. They were a phenomenon of early talkies, when there was still some novelty to the fast talk and double talk the nut comics specialized in. Beyond that, something is lost now that may never have been there. Wheeler is the juvenile of the group, the amiable sap, the one more likely to have a romantic interest. Woolsey is the huckster, the guy in the glasses with the cigar who looks and sounds like a caricature of George Burns. In Cracked Nuts, directed by Edward Cline, Wheeler is a wastrel heir to a fortune desperately courting a girlfriend (frequent co-star Dorothy Lee) guarded by her intimidating aunt (Edna May Oliver), and also desperate to prove himself by investing his remaining wealth in some worthy project. He advertises his readiness to invest and is answered by dissident exiles from the South American kingdom of El Dorania. Led by smooth talking Boris (Karloff, months before Frankenstein's release), they convince Wheeler to "buy" their revolution, and promise to install him as the realm's new ruler. I don't know how common it was for Wheeler and Woolsey to play autonomous characters, but taking this approach in Cracked Nuts establishes Wheeler as a conventional, perhaps sympathetic sad-sack comic pining for his dream girl. But the business of him sneaking into Lee's apartment and hiding in Oliver's shower, fully clothed and armed with an umbrella, didn't really impress me. Oliver's assessment of the character as a hopeless idiot did not seem unfair.

Meanwhile, unknown to Boris and the other conspirators, events in El Dorania have overtaken their plans. The king has been overthrown peacefully, having surrendered his sovereignty at a casino craps table to an American gambler (Woolsey). The stage is set for a mock-epic war of comics, who prove to be old buddies but whose claims to power are, of course, irreconcilable. Add to this the complication that Boris's conspirators and a powerful general at home intend to use whoever wins as a figurehead, and are willing to kill both once their usefulness expires, and add to that that Wheeler's girl and her aunt have followed him to El Dornaia, and he must still prove himself to them.

Why doesn't it work? More correctly, why doesn't it work now? Then, Cracked Nuts was a hit and made a profit for RKO, while Duck Soup notoriously flopped and put the Marxes' future in movies in jeopardy. With more historical context to work with, we can guess that the Marx film was seen as yet another in a soon-tiresome mythical kingdom genre that was fresher two years earlier. And that's all I've got, because I really can't imagine how anyone found Cracked Nuts funnier than Duck Soup. The Wheeler-Woolsey picture is inferior on every level. One reason why they haven't endured is that their comic personalities are shallow. The Marxes transformed themselves into iconic characters, each with a broad, intense, easily grasped persona. With Robert Woolsey in particular, you never see anything but a vaudeville comic doing his shtick. There's a fatal vibe of self-amusement when he and Wheeler lapse into practiced patter, like the scene when they find seemingly limitless ways to use the word "well" in a sentence, while the Marxes' comedy crackles with sibling rivalry and better writing. Wheeler and Woolsey never seem to do more than tell jokes self-consciously, except when Wheeler gets to sing and dance. They seem like rough drafts of better future comedians, never more so than a scene in which they compare war strategies while contemplating a map of El Dorania. The accursed nation has landmarks named "Which" and "What," among other things, and Woolsey's attempt to explain it all to Wheeler plays like a very rough draft of Abbott & Costello's "Who's On First."

Nor can Cline and his writers match the epic absurdity achieved by Leo McCarey and the Duck Soup writing team. There's no sense of larger satire here, nothing like the "We're Going to War" number or the surreal take on war-movie cliches in the Marx film. The climax of Cracked Nuts is the attempted execution of Woolsey by aerial bombing, with an unbilled, clean-shaven Ben Turpin, the cross-eyed man himself, piloting the death plane. As in many sound comedies, Turpin, apparently not trusted with dialogue, is reduced to a cameo turn in which his face is the one and only joke. The big joke of the scene is that Woolsey sneers at his fate, Wheeler having told him that he'd defused the bombs in advance, and refuses to move from his throne of doom even after live bombs start dropping. Years before, Cline had worked on Buster Keaton's early short subjects, but you wouldn't guess that from what you see here. Only a wordless sequence at the start of the picture with Wheeler waiting for an elevator hints at Cline's mighty heritage. Consider who he was working with, however. I've liked at least one Wheeler-Woolsey that I've seen, but that remains the exception. Watching them here, doing a mythical-kingdom bit, puts them head-to-head with the Marx Bros, and for that reason it also puts them in their place, however inconspicuous, for posterity.
Posted by Samuel Wilson at 11:51 PM