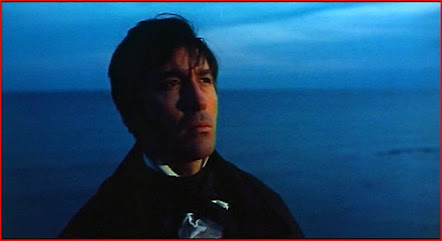 From Mario Bava's The Whip and The Body (1963)
He may not have cared to acknowledge it himself, but Lee, whose death last weekend was just reported today, was the last of the Horror Men. We still have horror directors today but we no longer have stars like Lee who were typed as horror actors and around whom horror movies were built as star vehicles. The closest we've had to that in more modern times is Robert Englund, who has done what lately? Like many Horror Men, Lee's career ran a kind of inverse arc, dipping in the 1970s from his peak of Hammer and international stardom to a trough of for-the-money trash (look up his sci-fi bomb End of the World, for instance), for which he would make bitter excuses after the fact, only to rise again at the turn of the century. The irony is that while Lee's passing marks the end of an epoch of grand-manner horror and character acting, it was modern moviemaking and its computerized wizardry, along with the fond memories of fans turned moguls, that made him viable again in his last years. You could digitally attach his face to a fake body so that Count Dooku could battle Yoda with inhuman acrobatics, yet it was Lee's voice and his imposing presence that George Lucas remembered and realized he could still use. Likewise, Lee's longevity and the enduring power of that voice earned him the main gig of his latter career as Peter Jackson's Saruman. As an aside, I suppose Jackson has been kicking himself for the last dozen years for having thrown away the Saruman-centric "Scouring of the Shire" episode when he probably could have made at least one full-length movie out of it with his current methods, and it wouldn't surprise me if Lee had grimly reminded him of this while they shot his Hobbit scenes. Modern technology gave Lee an additional outlet in numerous opinionated and entertaining know-it-all DVD commentary tracks, though the advent of streaming video may soon reduce his remarks to buried treasures. Like Karloff and Vincent Price, Lee ended his career as a beloved icon, and was used as such not only by Tim Burton in several films but also by Martin Scorsese, to amiable effect, in Hugo. Lee's ultimate triumph is that he is remembered this week not just as a legend of horror but also as a contemporary movie star. He didn't have to depend on his old movies remaining relevant, though many are. He was part of this generation's pop-culture mythology as well as their grandparents', because his talent, and not just his material, remained relevant to the end.

Click here for a compilation of reviews of Lee's work.
Posted by Samuel Wilson at 1:29 PM