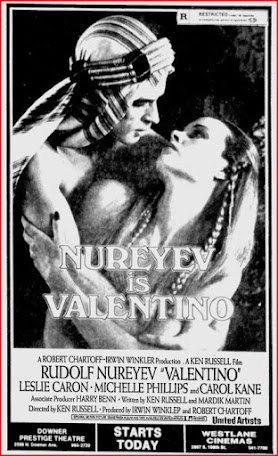 Hollywood had two disaster-movie cycles in the 1970s: the films about natural disasters and vehicle crashes, inspired by Airport, and the movie-industry biopics, flops all, reportedly inspired by the sleeper-hit compilation film That's Entertainment! Some of these had already come and gone by the time someone had the bright idea to have Ken Russell, who had already put his own peculiar spin on the biopic genre, make another. His wasn't the first biopic about the archetypal Latin Lover; its predecessor made little impression back in 1951. The producers could be certain, however, that Russell wouldn't simply go over old ground. The result is probably the most interesting of all these misbegotten biopics. Russell, the visionary who'd given us The Devils and Tommy among others, as well as biopics about Tchaikovsky and Mahler, handicapped himself by casting Rudolf Nureyev, pushing forty, in a title role he was way too old for in the early stages of the story. On the other hand, Valentino, like Nureyev, was a dancer and could be called "Rudy," while the Russian's generic foreignness gave him an advantage over Russell's earlier and potentially more catastrophic choice for the role, David Bowie. Nureyev gives a game performance but a natural flamboyance doesn't quite counterbalance the screenplay's mostly passive conception of the protagonist. The problem with any biopic is that biography doesn't automatically translate into plot. Without a commanding idea of a character arc for the subject, the necessity of following facts, sometimes honored in the breech, threatens to turn your historic hero or heroine someone to whom things happen rather than someone who makes things happen. Russell and co-writer Mardik Martin fall into that hole and dig it deeper by telling their story in flashback form, framing it with Valentino already dead and surrounded by fans, friends and former lovers at his riotous wake. The wake is a standard Russell set piece as a mob crashes through picture windows, trampling each other to get a look at their dead idol, and grows only more so as the self-appointed chief mourner, Valentino's onetime co-star and mentor Alia Nazimova (Leslie Caron) appears, attended by a host of veiled maidens -- or are they concubines? Nazimova here usurps the historic role played by Pola Negri, who made a big show of fainting at Rudy's bier. Here, Nazimova even gets up and does it over again so the newspaper photogs can get a decent shot. She's a perfect subject for Russell; more perfect, perhaps, than Valentino, who here is shown wanting to fit in and be recognized, his ancestry notwithstanding, as a typical American male. If Russell has a soulmate on screen in this picture, it's either Nazimova or her protege, later Rudy's wife, the pseudonymous cosmetics heiress Natasha Rambova (Michelle Phillips). Both women are pretentious aesthetes, ambitious to direct movies -- in a hilarious scene Natasha and the credited director of Monsieur Beaucaire sit side by side in matching director's chairs, she coaching Rudy, the man coaching his co-star -- until they call out "Kiss!" simultaneously -- and when these would-be superwomen lock Valentino in a romantic triangle they nearly eclipse the star. Fortunately, chronology allows Rudy (character and actor) to break free of them for the final act, which really deserves its own paragraph.

The final act is especially interesting for what it anticipates as well as for the way Russell and Mardik Martin use the death of Harry Houdini as a model for Valentino's demise. Houdini's fate was sealed, so it's said, when his vaunted ability to resist any punch to the body was tested before the master magician had braced himself; the internal damage led to peritonitis. Valentino also died of peritonitis, and as it happened not long before he had gotten into a fight. A precursor of Uwe Boll, he had challenged to a fight not a critic of his movies but an editorial writer who blamed him for the new availability of pink powder puffs in hotel restrooms and thus blamed Valentino for the moral decadence of American men. The author of the editorial never showed but another writer accepted the challenge and a fight apparently did take place, won by the actor. This legendary battle gives Russell an epic finish to his film. It's not as great as it could have been because Russell, here as elsewhere in the picture, undercuts Nureyev's virtuosity with editing. At least I think the great dancer could have done a sustained, choreographed boxing scene. But if I was thinking more of City Lights, what Russell does, more by focusing on the antics outside the ring than inside -- there's dancing around the ring between rounds and the crowd pelts Rudy with powder-puffs after a knockdown -- is turn the fight into an expressionist summation of Valentino's struggle for acceptance and his anger over critics of his masculinity. In other words, Russell uses boxing expressionistically a few years before Martin Scorsese's Raging Bull, although the real credit may belong to Mardik Martin -- who also co-wrote Raging Bull.

Valentino's flashback format made it hard to warm to the film, especially when the flashbacks are framed with deadly expositional dialogue, but the more Russell-like it became, the more I liked it -- not because I'm a mark for the director but because he was working hard, unlike the other Hollywood biopics of the time, to give this dead material some kind of life. I warmed to Nureyev as Valentino approached the actor's own age, and I also enjoyed the much-disparaged performance of Michelle Phillips, critics of whom seemed to miss the point that Natasha is meant to be seen as a talentless yet entitled poseur. I also dug the eccentric casting that gave former Bowery Boy Huntz Hall probably his most prominent later-life role as Paramount studio head Jesse L. Lasky. Russell's attempted pastiches of silent film, including re-dos of The Four Horsemen of the Apocalypse and The Sheik, are bad enough to leave you wondering what audiences saw -- as Russell shows them seeing -- in these films, but since the film is about Valentino, not his audience, though the latter play a prominent Greek-choral role in a climactic seance scene, his laziness in recreating archaic film style can be excused. Valentino can be seen as more than a relic of a futile film cycle. It can be seen as a characteristic auteur project, of course, and as long as that prepares you for what you're going to see you probably can appreciate the film on its own terms -- as an understandable yet undeserving flop.
Posted by Samuel Wilson at 9:12 PM