Henry Harrison Conroy was about five feet, six inches in height, rotund, 55 years of age, with a spare growth of taffy-colored hair on his head. His face was moon-like, the muscles sagging quite a bit now, and adorned with a huge, putty-like nose which was forever red. In dress he was a typical down-at-the-heel vaudevillian, an old-time tragedian in manner.
- W. C. Tuttle

"Henry Goes Arizona" was published in the February 23, 1935 issue of the weekly Argosy pulp magazine, a copy of which I happen to own. The seeming grammar error presumes that one "goes Arizona" as one "goes Hollywood." W. C. Tuttle was a veteran pulp writer who specialized, to be specific, in the western comedy detective genre. He'd already been writing such stories for something like twenty years, with Hashknife Hartley being his most enduring character. Henry Harrison Conroy may have passed Hashknife in popularity. Before 1935 was over he had graduated from novelettes to "book-length novels," i.e. serials, and regularly won the Argosy cover when a new serial began. After Argosy underwent a format change in the early 1940s, Tuttle moved Henry over to Short Stories, a biweekly pulp, and continued writing about the so-called "Shame of Arizona" at least until late 1948. 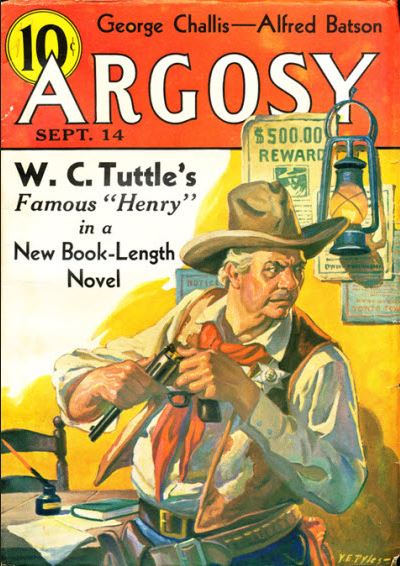 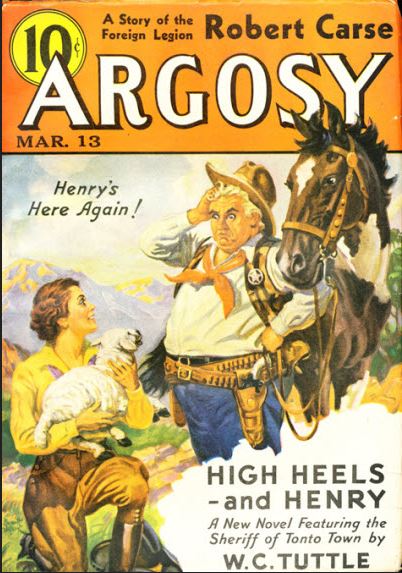 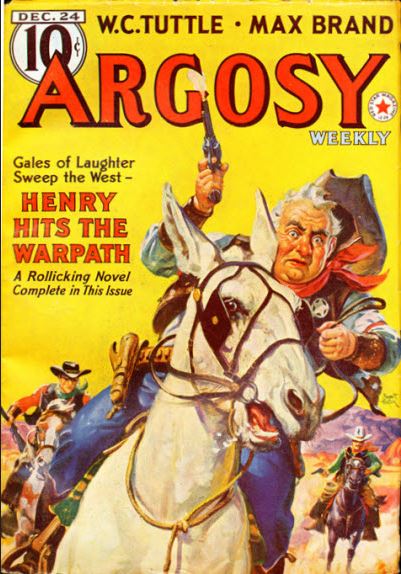 This one's from 1938, after Argosy abandoned its signature red band cover format. 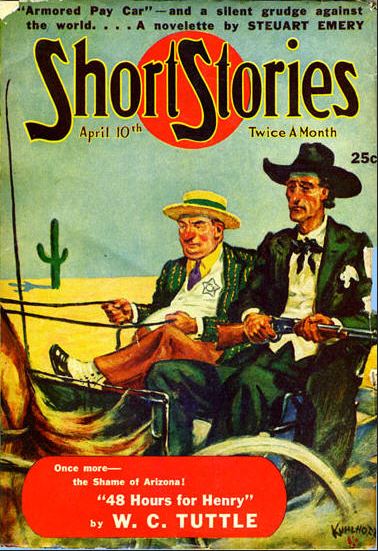 While Short Stories published numerous Henry stories, this 1947 issue has the character's only cover story.

By 1939 Metro-Goldwyn-Mayer had recognized Argosy as a source of likely screen material. The studio had launched a successful film series based on Max Brand's re-launch of his Dr. Kildare character in a series of Argosy serials. M-G-M made movies of two Marco Page serials, Fast Company and Fast and Loose, about yet another husband-wife team of detectives. As Henry Harrison Conroy was one of Argosy's most popular recurring characters, he must have seemed a likely prospect for the Tiffany studio. Once Metro acquired the rights, the only real question was whether the studio would do the obvious and hire W. C. Fields to play Henry. The original story practically begs Fields to play the part, harping often on Henry's red nose, and the pulp character never deviates from a Fieldsian ideal, albeit in benevolent mode. For all we know, this came close to happening. We know that Fields was in negotiations with M-G-M for the title role in The Wizard of Oz. Had the great man taken that part, and had a contract come with it, he very likely may have played Henry. But he signed with Universal instead and did a comedy western of his own, or of Mae West's, in 1940. And as it turned out, the man who played the Wizard, Frank Morgan, also played Henry Harrison Conroy.

Morgan shouldn't be blamed for the botch Metro made of Henry. Florence Ryerson and Milton Merlin adapted Tuttle's origin story, and Edward L. Marin directed it. Something clearly went wrong during the production. George Murphy and Ann Morris were cast as the story's romantic leads, and publicity items described the rigors they endured while making a western, but both ended up on the cutting-room floor. Someone had decided to make Henry Goes Arizona a kiddie film. This meant creating an original character, a little girl named Molly (Virginia Weidler) as the main figure for Henry to interact with. That move killed whatever distinctive quality the Henry stories have. They're really no great shakes. I've read some of the serials and they grow repetitive in a sitcom way as each of Henry's supporting cast comes in to do his particular comedy bit. Most of those characters are absent from the movie. We're left with Henry's principal sidekick, the alcoholic but still-sharp lawyer "Judge" Van Treece (Guy Kibbee), while the irascible cook Frijole and the stock Swede ranch-hand Oscar are nowhere to be found. Instead we have Boris (Tenen Holtz), who seems like nothing else but a nod to Mischa Auer's genuinely unorthodox Russian deputy in Destry Rides Again, which had come out earlier in 1939. While Kibbee may have made a good Judge Van Treece, despite the physical mismatch -- Judge is the tall man to the right on the Short Stories cover -- in the Pre-Code era, in the era of Code Enforcement there was almost no point in making a Henry movie at all. There's nothing especially violent or salacious about Tuttle's westerns, but if the Henry series has a particular spirit to it, that spirit can be described as whiskey-soaked. Henry and Judge are epic drinkers who imbibe at every opportunity. In our time, to get the same effect, they'd have to be stoners. Yet we can't have that innocent little girl consorting with a couple of drunks, so apart from occasional mentions of going somewhere for drinks we get nothing like Tuttle's characteristic scenes of his protagonists arguing sardonically in their cups, never as impaired mentally as people suggest. Instead, we get silly scenes in which Judge convinces Molly to hide in a hay loft so he can convince Henry that she's been kidnapped, and thus motivate him to stay in Tonto Town, where in story and film the over-the-hill vaudevillian has inherited a cattle ranch from a murdered brother, rather than flee from threats of violence, only to find Molly actually kidnapped by the time he brings Henry to the barn to tell him the truth. And we get pathetic scenes in which Molly tries to shame Henry into sticking it out despite his cowardice. To sum things up, Molly is an albatross around this film's scrawny, 66-minute neck, and there was no good reason for her to be there.

I think Frank Morgan could have played a more authentic Henry. Tuttle's character has a self-deprecating attitude toward himself and a bemused attitude toward everything happening around him, especially once, in later stories, he's made the sheriff of Wild Horse County. He has more cunning than most give him credit for, or else how could he solve all those mysteries, but his preposterous appearance and laid-back demeanor keep him on the brink of recall and earn the county the "Shame of Arizona" label that stuck with the series to the end. In short, imagine what Fields could have done as Henry, and I think Morgan could have done something similar. But the screenplay reduces Henry to a fuddy-duddy fraidy-cat until he's shamed into taking a stand and uses his makeup kit to lure his enemy into a trap. In the original story Henry charges into a burning bank because he suspects a corpse will be found inside. The film keeps some incidents from the story, including a banquet that ends with an assassination attempt and Henry mistaking catsup for blood. It also expands on a bit in which Henry takes a tumble while dismounting a horse, showing us his difficulties in climbing aboard in the first place, but Morgan isn't enough of a physical comic to keep the pratfalls interesting. Just about nothing is as it should be in this picture, and yet it shouldn't have been hard at all. For all the times when Hollywood improved on pulp or slick magazine material, there are also times like this one when Hollywood tried to improve on something that really was no masterpiece for starters and only managed to make it worse. As a result, Henry Goes Arizona stands forlornly alone while W. C. Tuttle kept on writing Henry stories for another decade. In this case, M-G-M should have left pulp fiction to the experts.
Posted by Samuel Wilson at 10:42 PM