THE ARIZONIAN (1935): An American cinematic milestone?

Until its last few reels Charles Vidor's RKO western is a mostly undistinguished town-tamer film, with Richard Dix as an Earp type, Preston Foster as a badass Holliday type -- he introduces himself to Silver Cit by buying drinks for the house and tossing a shot in each man's face -- and Louis Calhern as a corrupt sheriff on the model of Tombstone's Johnny Behan. The film is burdened with a supposed comedy-relief subplot featuring Willie "Sleep 'n Eat" Best and Etta McDaniel, Hattie's sister, in an uncredited role as Best's would-be wife. Best is his typical cowardly self, scared even to play a ghost in a walk-on bit for some hack Shakespearean's recitation of a speech from Hamlet. He hardly seems a prize, but he may be the only black man in Silver City, leaving Etta few options. Best feels the mating urge less strongly and McDaniel has to win him in a dice game, more or less. All of this seemed like padding, not to mention pandering of the worst sort. And then Calhern reveals just how evil and cowardly his sheriff is. He's trapped the good guys, including the Dix character's brother, in the jail and has set it on fire. Forgetting his default cowardice, Best grabs a rifle and heads for the action, telling McDaniel he's not going to let those men die. Calhern shoots him in the back and Best dies in front of a stunned McDaniel. How low can you get, really? This man, this so-called sheriff, was afraid of Willie effin Best.

Well, the good guys get out of their predicament just the same, setting up an OK Corral style showdown. Now Vidor rises to the occasion, filming the action mostly in a single take, following the three heroes as they march guns blazing into a cloud soon thickened by gunsmoke until we can only hear the action. In time the smoke clears enough that we can see that Dix is the last man standing. But as he bends down to tend to his friends, we see that Calhern had found shelter in a building. He now emerges at the top of a commanding outside staircase to pick off the unsuspecting Dix. The classic moment follows: we see Calhern raise his rifle and we hear a shot, but it's Calhern that falls. But how did that happen? Now Vidor shows his ace in the hole. 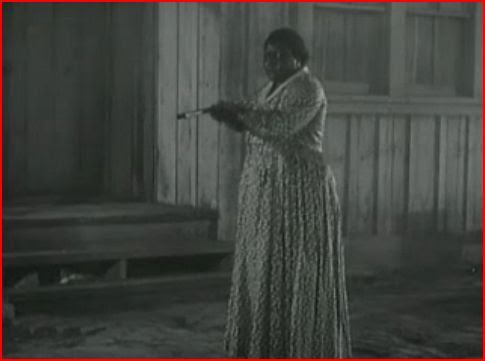 I'd never heard of Etta McDaniel until tonight, so I was prepared to do the Mondo 70 equivalent of clickbait and title this post, "Hattie McDaniel Kills!" until I double-checked the casting. Regardless of which sister did the deed, there's still an important question to be answered. Is The Arizonian the first Hollywood film to show a black woman killing a white man, not to mention show it as a positive act? For all the political incorrectness of Gone With the Wind, I always want to give it credit for the scene in which Everett Brown, as Big Sam, rescues Scarlett O'Hara from a gang of white trash at a bridge, since it must be one of the first movies to allow a black man to beat up white men. Now we see that The Arizonian licenses a black woman to kill a white man, and not just to protect a white man but to avenge a black man's death, and does it four years earlier. I don't think they ever tried that in the Pre-Code era. Dudley Nichols came up with the idea the same year he earned an Oscar for the screenplay of John Ford's The Informer. He has far better known westerns to his credit, including Ford's Stagecoach (adapting Ernest Haycox's story), Henry Hathaway's much-underrated Rawhide (his westernization of the 1935 gangster film Show Them No Mercy) and Anthony Mann's The Tin Star. But Nichols may well deserve a place in western movie history for The Arizonian's breakthrough moment of inspiration alone.

Posted by Samuel Wilson at 9:21 PM