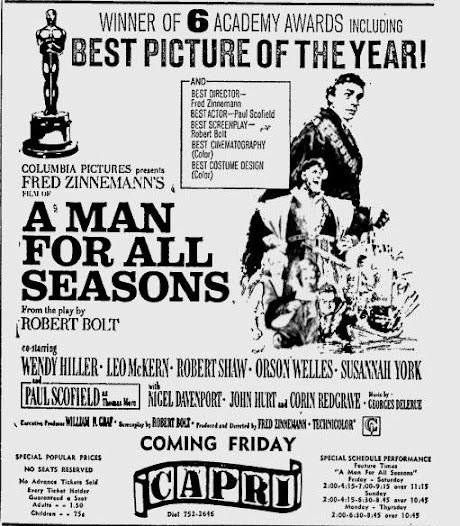 Unlike most films reviewed here, I've seen Fred Zinnemann's Oscar-winner before, but I suspected that after seeing the Wolf Hall miniseries, which is to A Man For All Seasons as Wicked is to The Wonderful Wizard of Oz, I could not see the 1966 film the same way again. Robert Bolt's screenplay and original stage play and Hilary Mantel's novel and its stage and TV adaptations offer nearly diametrically opposed portrayals of Thomas More, Bolt's protagonist, and Mantel's protagonist, Thomas Cromwell, and Mantel's work, if some remarks in the teleplay represent the novel accurately, is intended in part as a debunking of Bolt. What, then, is there to debunk. Above all, there is a notion of More (Paul Scofield created the role on stage and won an Oscar for his work on film) as a patron saint of liberal dissent, a martyr in defiance of absolute power. Wolf Hall's More is little more than a fanatic, driven by his fanaticism to defy the King as he was to persecute Protestants earlier, while he had the King's favor. Wolf Hall is at pains to show More no saint, but is sainthood what Bolt and Zinnemann were selling?

After seeing Wolf Hall, A Man For All Seasons may look like a whitewash of More, but many scholars challenge Mantel's indictment, disputing, for instance, whether More supervised the torture of heretics or had it done in his own home.  But if Bolt's More is a relatively wartless hero, he is also a tragic one. His tragic flaw is his belief that his wit and prudence will allow him to dissent in peace, in private if need be, from the demands of Henry VIII. More believes he can reason his way to a point of safety where he can live with his conscience in a state of public neutrality, expressed in silence. He does not reckon on absolute power's need for absolute affirmation, and this shortcoming made More a perfect tragic hero for the Cold War era. Part of the terror of the totalitarian phenomenon was the fear that you could not opt out of the ritual praise that cults of personality demanded. In liberal democracies we excuse (and sometimes encourage) apathy with the argument that silence equals consent. Totalitarianism, as fearful liberals understood the concept, did not seem to accept that premise. For the Great and Dear Leaders of the 20th century silence only made one suspicious; a short leap of paranoid logic equated silence with treason. Such is Henry's thinking when More tries to opt out of signing an oath recognizing Henry as head of the Church of England, supplanting the Pope, and recognizing Anne Boleyn (a virtual nonentity in this film despite being played by Vanessa Redgrave) as Henry's rightful queen. More hopes that he can get away with it without explaining himself, thinking that reasons might offend the King when it's the refusal itself that seals More's fate. More's fate is tragic but it becomes heroic when the issue is forced and, having nothing to lose, he speaks truth (or faith, or doctrine) to power, albeit to Parliament rather than the King himself. If he must die for not saying Yes, More may as well tell the world why he says No. And if all of this seems to matter little to Hilary Mantel, that may be because, once our side won the Cold War, we could see more clearly that there was no struggle there between Power and Liberty, but only, as ever, a battle of Power against Power in which all the players have it coming and none are heroes. Mantel may not be as sure, either, as More (or Bolt) of any higher law justifying the hero's obdurance.

But what of Mantel's own hero, Thomas Cromwell? In A Man For All Seasons Cromwell (Leo McKern) has no private or inner life. He is shown gradually maneuvering More into traps, but from what motive? There's no hint of the indignation over More's cruelties and stubbornness that Mantel has Cromwell express. It may be that Bolt's Cromwell has no personal opinion of More or anyone else. He seems to exist only to serve the King, and in the worst way from the anti-totalitarian perspective. Cromwell rises from Cardinal Wolsey's flunky to attorney-general of England because he is, above all, an informer, always seeking to catch rivals or betters in "treason" and eager to denounce them to his master. In totalitarian states people like this were thought to flourish in times of terror and purges, and with the totalitarian model in mind Bolt and Zinnemann emphasize Cromwell's role in what they see as a show trial of More, while Mantel and her interpreters in other media seem to minimize his role. For instance: once More begins to assert himself at the trial he is told that his viciousness now stands revealed. In Bolt the words are Cromwell's; in Mantel they're spoken by the Duke of Norfolk, an aristocratic thug who for Bolt and Zinnemann (played by Nigel Davenport) is a sometimes blustering but ultimately ineffectual former buddy of More. Here we should note a possibly more important reassignment of dialogue. In Seasons More's learned daughter (Susannah York) tries to argue with him, in his cell, that the mere words of the oath can't harm his soul as much as he fears. In Wolf Hall Cromwell makes that argument and by inference wants More to live. Bolt's Cromwell either couldn't care less or definitely wants More out of the way. A friend who watched Seasons with me this time described McKern's Cromwell as a moustache-twirling villain, and given McKern's bombast, practically his Cromwell's only character trait, I get the point. Was Mantel reacting to this? Does Wolf Hall begin with a feeling that McKern is too bad to be true, even more than Scofield's More is too good? If Mantel has commented on the film I haven't seen it, but I haven't searched that hard, either.

As a movie, A Man For All Seasons is a ponderous thing. Scofield is still impeccable, but speaking of bombast, Robert Shaw's Henry made me appreciate Damian Lewis's relative underplaying in Wolf Hall even more. Was Peter O'Toole unavailable, or would his presence on the throne made the play's resemblances to Becket perhaps too obvious? In any event, Scofield has to carry a visually unimpressive film, opened up a bit, presumably, from a stage production described as "Brechtian" with some hopefully epic scenes of royal riverboats. The most shocking thing now about the Zinnemann film is that cinematographer Ted Moore won an Oscar, apparently for overlighting everything to get just the right soundstage look to every interior scene. Wolf Hall's frequent chiaroscuro perhaps was not in Moore's power back then, but makes the Oscar-winner's work look instantly unconvincing. A number of people, including Zinnemann, won Oscars riding on Scofield's coattails, but the truth is that the star and the script are just about the only reasons to watch A Man For All Seasons. These stand the test of time and Wolf Hall, challenged but not refuted. Bolt's and Mantel's are alternate universes and can coexist quite well unless you have some stake in the reputation of Thomas More that most of us don't. If Wolf Hall makes Seasons look more like a work defined by its own time, that doesn't render the film irrelevant just yet.
Posted by Samuel Wilson at 8:00 PM