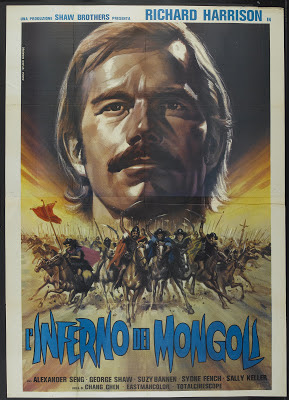 The first time I saw Chang Cheh's historical epic, before I knew who Chang Cheh was, it was called The Four Assassins. I saw it on some local independent channel's kung fu theater time slot, and it was memorable for me because it was the first time (that I can now recall) I saw the sort of baroque training sequences that typified kung fu movies from the mid Seventies through the early Eighties. To me and my friends it was all laughably absurd, but on seeing it again recently (in the proper aspect ration on the El Rey channel) I found the training bits some of the most dramatically effective I've seen in the genre. The four Chinese heroes of the story, rebels against Kublai Khan, who has appointed the famous Venetian trader (American-Italian star Richard Harrison, who'd end up in more martial arts movies than he could ever imagine) a constable to hunt them down, are rusticating on the friendly estate of a former kung fu master. They hope for training but as the Mongols have made martial arts illegal, the best the old man can do is give them jobs as manual laborers. Some of these jobs can't be done in the conventional manner because the tools that are normally used have also been banned, since they can be used as weapons. In the worst case, one of our heroes must harvest bamboo without a blade; he must twist the tough branches between and around his legs until they snap, shredding himself in the process. Another hero has to sift some very coarse grain with his bare hands and arms; the stuff scratches even worse than iron failings. The others aren't technologically limited but are heavily burdened just the same; one must clear a field of heavy boulders, while the last gets comeuppance for peeing in Marco Polo's soup earlier in the picture by having to empty some open-air latrines. In what was the funniest bit for me, his boss -- all the heroes have taskmasters who clearly were  fighting masters in their day -- warns this guy not to fall into the pisspits. Our hero's not worried; he boasts that he could leap right out if he fell in, not realizing until the boss throws him in that the urine comes up to his ribcage. It is now his regular job to practice jumping out of the pit until he graduates into jumping straight from one pit into another, and from that to another. The long-term payoff for the story is that each hero develops extraordinary abilities from their labors. Jumping, obviously; Samson-like strength for the boulder guy; devastating hand strength for the grain guy, who also has to work the mill's whetstone with his hands until it's smooth; and a powerful, near-invulnerable lower body for the bamboo guy -- an aid to his "pugilism," which for this film doesn't seem to mean what we think it means. The short-term payoff is a great scene in which the heroes reunite after their first day at work and are utterly exhausted -- and in the case of the latrine guy, vile smelling. The four actors do a great job selling their exhaustion and initial bafflement at their new condition, and the separate chores do a lot to individualize them, as is often the case in Chang Cheh's tales of collective heroism. Those scenes stuck in my memory for thirty years or more not just because they were absurd, but because they were good.

The first time around I had no idea of when The Four Assassins was made or even of who Richard Harrison was, much less Chang Cheh. Watching Marco Polo now and knowing when it was made, I can't help seeing it as a critical allegory from Hong Kong of the west's detente with Communist China. While American Marco Polo movies often portray Kublai Khan as a wise, almost lovable old ruler, Marco Polo portrays him unambiguously as a despot whose Mongol repression of the Han echoes Mao Zedong's Communist repression of Chinese traditions. Bedazzled by the power and pomp of the ruler's court, the foreign trader-diplomat almost unconsciously becomes a collaborator. Did Chang Cheh and co-writer Ni Kuang mean to warn that a western rapprochement with the People's Republic would likewise further consolidate the tyranny that westerners claimed to deplore? If so, they also close on a hopeful note after the four heroes awaken Polo to the truth of Mongol tyranny as experienced by ordinary Chinese. Would you like it if the Mongols took over Venice and did the same thing? they ask. Marco gets the point and aids the good guys, albeit passively, in their final showdown with the Mongol enforcers who are the film's real villains.  The four-way climax is a nicely paced job of direction and editing punctuated by epic feats of strength from the boulder guy. I remember finding it hilarious decades ago how his weightlifting left him able to punch holes through and push down thickly mortared walls before taking dozens down with him Samson style. There's still a certain naivete to the effects but now that I'm more in the spirit of martial-arts cinema I recognize and respect the patriotic exuberance of all the heroic destruction. As a veteran of peplum (or "Hercules") films maybe Harrison gave the Chinese some pointers. It's unlikely the ostensible star -- the Venetian's transliterated name is the film's original Chinese title -- had much or any creative input but in a manner befitting his presence there's a peplum quality of virtuous heroism that fits nicely with Chang Cheh's typical concerns. One could argue, after all, that the kung fu genre was the true global heir of the peplum after Italy abandoned musclemen for amoral spaghetti westerners, and Harrison's presence here is like a belated acknowledgment of the torch having passed to worthy successors.