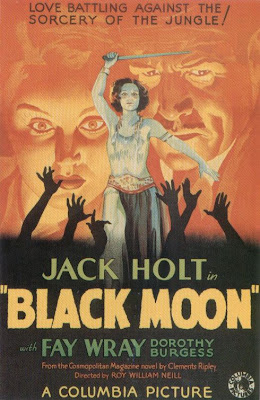 Roy William Neill's voodoo-rama turned up again this week on TCM, so in the spirit of the month I decided to take a look. I remember reading an article about this movie in Films in Review magazine years ago and had been interested in it ever since. It pretty much lived up to expectations. Neill stages things quite nicely, uses props in the foreground to keep his sets well dressed, and the sets themselves are well designed so he can employ swish pans or move from one level to another. He did equally good work the following year in The Black Room, which boasts Boris Karloff in a dual role, and both these Columbia horrors strike me as better films than his contribution to the Universal mythos, Frankenstein Meets the Wolf Man.

In bare outline, Black Moon anticipates I Walked With A Zombie in making the heroine an aide to a troubled woman under the spell of the Caribbean. But the Columbia film distinguishes itself by making its bewitched female an outright villain. She's Juanita Lane (Dorothy Burgess), who fell under the influence of voodoo when young and has never quite shaken it. The film opens with her playing ominous drums for the supposed entertainment of her young daughter, who'll be set up for her own initiation into voodoo later, or worse. Gail Hamilton (Fay Wray) reluctantly comes along to look after Juanita's daughter and increasingly becomes a surrogate mother figure, especially as she warms to Juanita's estranged husband Stephen (top-billed Jack Holt). The natives of the island of St. Christopher welcome Juanita back, but regard the other whites with suspicion. The only black ally Stephen Lane may have is "Lunch" McClaren (Clarence Muse), a Georgia-born boat captain who feels as superior to the native "monkey chasers" as the whites might. But he ends up stranded on the island with the Lane party as the local voodoo cult re-establishes ties with Juanita, who has an important role to play in an upcoming human sacrifice.

In fact, Juanita's sudden appearance in voodoo garb to perform a dance to the dark gods is a startling moment that drives home how far gone she is. Stephen and Lunch try to abort the sacrifice, the victim being Lunch's native girlfriend, but after Stephen plugs the high priest and both men flee, Juanita herself takes up the sword to finish the bloody work. While the priest is only wounded, it seems like the balance of power is shifting toward Juanita, who leads a siege of the Lane compound with the thought of sacrificing her own husband. But when the good guys manage to escape, the pressure's on Juanita to sacrifice one of her own blood -- her own daughter.

Black Moon is a horror movie that doesn't quite look like a horror film. Unlike The Black Room, this film from Neil does without the usual expressionistic effects or gothic tone we associate with vintage horror. Despite its bigotedly distorted view of voodoo, it aims for a more realistic visual and storytelling style than, say, White Zombie -- the film that most likely inspired Black Moon's production. By Universal standards, Dorothy Burgess probably looks like an underwhelming villain because, apart from the dance, she tends to underplay her part, as if selling that she's in a trancelike state throughout. But she ends up being one of the most troubling characters in pre-Code horror because she gets a moment when motherhood must vie with voodoo for her ultimate loyalty -- and motherhood loses. Skip the next paragraph to avoid a spoiler.

As Black Moon reaches its climax, I was expecting motherhood to win out, which given the situation would mean that the already irredeemable Juanita, having already murdered at least one person, would kill herself rather than sacrifice her daughter. But the spell of voodoo proves too strong, leaving Stephen only one way to save the child -- by killing his own wife. The script could actually have done more to sell how awful a moment this should have been for Stephen, but the writers had little more than an hour to fill, and I don't know if Jack Holt was enough of an actor to sell it. But the thought of how this all plays out is pretty chilling.

Strange to say, but Fay Wray is actually disappointing here; I don't recall whether she screams or not in the picture, but she's never really in individual peril, and that seems like a waste. If you have her in a horror flick it should be her facing sacrifice, but instead she's rather like a spare tire. You know she's going to take Juanita's place in the Lane family, but she has no chemistry with Holt and doesn't have enough conflict with Burgess to earn her second billing. On the other hand, Clarence Muse was a pleasant surprise as Lunch. He had a brief role as a dignified coachman in White Zombie, but here gets one of the more fleshed-out roles for a black actor in this period. Lunch is his own master and as an American is not in thrall to voodoo like the natives, though he rightly fears the pure evil of this film's concept of it. He speaks freely to white folks (though he shuts up when told to) and doesn't chicken out during the siege. Instead, announcing that "The time has come!" he takes a gun and fights alongside Stephen and the local doctor, and his shooting is just as effective as theirs. He's indisputably one of the heroes of the movie.

This isn't the first time I've seen a Columbia programmer on TCM and been impressed by it. It helps a lot that Black Moon looks terrific in a practically pristine print that flatters Joseph August's cinematography. August would go on to great things at RKO, and he really helps this film punch above its weight. Columbia was supposed to be close to Poverty Row in these years, apart from Frank Capra's films, but on the strength of Neill's movies it looks like they treated their experiments in horror as A productions -- or at least they look that way. It deserves a more prominent place in the Thirties horror canon.
Posted by Samuel Wilson at 7:12 PM

Lolita of the Classics said...

You got me really interested in this horror gem! I must say that your description of Clarence Muse made me curious. I have to look out for this film, I really want to see it! Too bad that they didn't seem to use Fay Wray's full potential, though.

I recorded this one the other night but haven't had an opportunity to watch it yet. Sounds like a movie right up my alley!

Ah, I must have missed this one when setting up DVR recordings for the week (it's like a ritual with me now). Or, another likely scenario is that space constraints just have me overlooking some things! I'll have to keep my eyes out for the next time that it's on.

Man, I am so pissed I missed this!!! How! How, TCM? I'm with Dave above, I usually fine tooth comb TCM for these treasures, this slipped past me and based on the poster alone which you supply in your excellent review, I'll never forgive myself. (til TCM shows it again, oy!)

I've always been interested in Voodoo, in particular from the 20' and 30's perspective. I read "The Magic Island" and books from that era, but I really enjoyed watching this film. It was well shot and worked nicely.

The film is currently showing on Fearnet. I am watching now for the second time. The character Lunch Mclaren steals the film with the best dialogue and delivery. A Hollywood vision of Haiti with many cultural stereotypes. Worth the watch