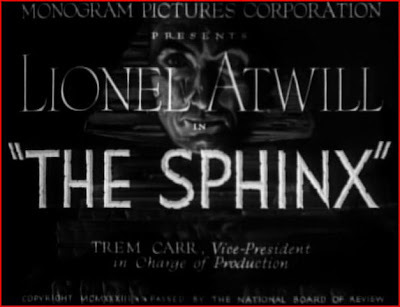 A janitor thinks he's by himself in an office building after hours when through a door steps Lionel Atwill, one of the leading horror men of the early 1930s, but the janitor doesn't know that. He's just a fictional character and wants to know what the stranger is doing in a closed building. The stranger doesn't answer, but asks for a light and the proper time before leaving. He's left a door open and there's a light on in the office of Mr. Garfield, a stockbroker. The janitor goes inside and finds Mr. Garfield, a corpse. He takes a stiff drink and calls the cops.

As the cops converge, reporter Jack Burton arrives on the scene. He's a typical B-movie reporter hero, i.e. a big smartass with little or no respect for the police. How did you know this was a murder, one flatfoot inquires. "Easy," Burton answers, "I made a quick check-up of the population of the city and found out we were one short."

"Yeah, but if you don't get out of here we're gonna be two short." the copper retorts. But Burton manages to bulldoze his way into the dead man's office and openly mocks the lead inspector. "You know I always tag along on all your unsolved murders," he says, "I just thought I'd come along and see you didn't break the record." But he also has an insight.

"Has the fact taken residence in your cranium that Garfield was a stockbroker?" he asks, "And that the other three victims of the recent murder cases were also stockbrokers?" So why not investigate clients of the dead brokers?

"If we're going to suspect everybody in this country who's sore on stockbrokers, we're gonna be getting out indictments for half the population of the United States." Detective Terrence Aloysius Hogan answers. 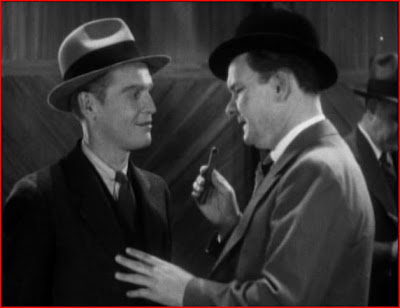 Welcome to 1933 and the relentless irreverence of Depression-era B movies. The Sphinx isn't an all-out pre-Code spectacle by the standard of 21st century expectations, since there isn't much sexual content or subtext. But Albert DeMond's insolent script and that crack about stockbrokers mark it as a product of its time, something we might not have seen or heard just a few years later.

I was watching it for Lionel Atwill, hoping it would be more of a "Forgotten Horror" than it proved to be. The Sphinx seems like it was meant as an acting challenge for Atwill that actually comes closer to wasting his skills. Here's how: that janitor gives a description of the stranger and presumed murderer that matches one Jerome Breen, an eminent philanthropist who's promptly arrested. But there's a big hole in the case against Breen. The janitor (and the viewer) distinctly recalls the stranger speaking to him, but Breen has been mute since birth due to defective vocal chords. An independent medical exam by the prosecution confirms this, and Breen is acquitted after a trial that humiliates both the police and Burton, who had publicized Breen as the killer. It also humiliates Burton in front of his girlfriend, society reporter Jerry Crane (Sheila Terry), who develops a soft spot for Breen and decides to write his life story. So Atwill has to play mute as the "sphinx" of the title. He learned some sign language, or faked some, but otherwise depended on his eyes and a kind of glazed smile to create an image of dull benevolence. But that guy we saw talking to the janitor in the office building was clearly Lionel Atwill. So what's up? 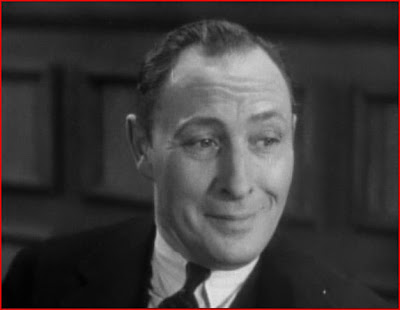 Things get more suspicious after a stockbroker's clerk starts playing a double game, blackmailing Breen while angling for a $5,000 reward offered by Burton's paper. He has Breen over to his mother's house to negotiate, and the good man makes his mute greeting to the old woman before going upstairs. Upon coming downstairs again, he vocally asks her for the correct time. This simple request sends the poor crone into a swoon. This is a kind of testament that Atwill's menace really does come largely from his voice, which the story has barely allowed him to use. But in any event, the situation has repeated itself. The would-be blackmailer has been strangled, but the killer can't be Breen, despite appearances, because he spoke to someone. 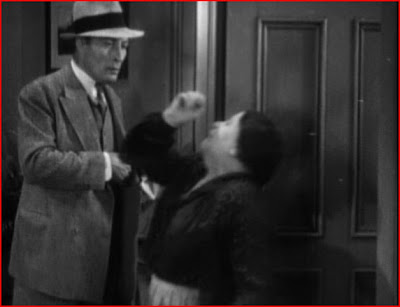 Actually, only one solution is possible for this puzzle, as some of you have probably figured out already. I'll preserve the mystery for the rest of you and reserve my criticism for an especially dumb plot device from later in the film. Needless to say, Burton and the cops are back breathing down Breen's neck after the latest murder, but he remains unperturbed, even when Hogan fires a gun in an effort to prove that Breen isn't really deaf. Moments later, however, Breen appears startled when Burton plays some idle high notes on his piano. Why does a deaf guy have a piano? As Breen's interpreter explains, it's there for the entertainment of his guests. But we later learn that the final key on the board activates a secret passage in a nearby wall. Breen hadn't actually heard Burton play, but was worried that he would hit the crucial key and open the passage. There'll be more suspense later in the picture as different people play that piano, until any rational mind must ask: if you have a secret passage in your house, and you don't want strangers opening it, why on earth do you wire the entrance up to a piano that you've put there for the entertainment of your guests??? 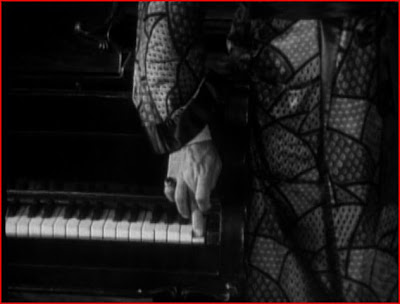 Atwill shows what he thinks of my critique of the whole piano business.

So let's face it: The Sphinx is a dumb movie, but I can't help liking it for its hard-boiled irreverence and wiseass ball-busting patter, for lines like, "Say, Sherlock, I can write all you found out on a postage stamp and still have room on it to do a jigsaw puzzle;" or "As for what he was wearing, he was just wearing on everyone;" or "I don't know what this country's coming to when a guy can't get a drink in a police station." You might laugh or you might groan, but you've got to love a world where people talk like that -- except for poor Atwill, most of the time. You could do worse with an hour or so of your time. 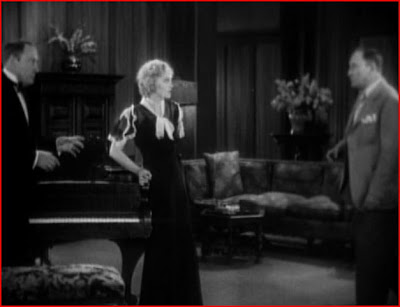 Now, for a limited time, The Sphinx comes with bonus Lionel Atwill!

Posted by Samuel Wilson at 9:55 PM

I don't know--I can think of at least two plausible explanations for what's going on. :)

I'm a big Lionel Atwill fan, me. Nobody did the Mad Scientist thing quite like him, and he did it a LOT (lucky for us). His turn as the one-armed policeman in SON OF FRANKENSTEIN is also a classic.

Vicar, the great thing about Atwill is that he comes across so often as an evil man rather than some freak, and that makes him more effectively chilling in many appearances. And then he'll do a good-guy role like Son of Frankenstein to show what he's capable of as an actor. There's a lot of his work that I've missed because it isn't in the horror genre, but continuing interest in pre-Code Hollywood should bring more vintage Atwill to the surface eventually.