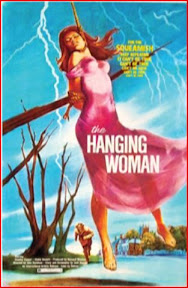 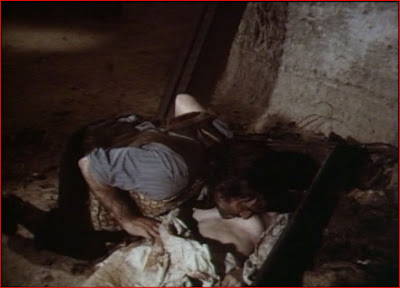 Igor's a relatively minor character in this story about mysterious deaths and the struggle for control of an estate and the laboratory inside, but he's probably the main reason anyone will buy the newly-released Troma DVD. That's because he's played by the living icon of low-end Spanish horror, the now globally-beloved Paul Naschy. Born Jacinto Molina, Naschy had a Spirit of the Beehive-style epiphany when Frankenstein Meets the Wolf Man played in his small town when he was still a child. Instead of projecting his horror fantasies on fugitive rebel soldiers, young Molina responded creatively, concocting his own monster stories and finally emerging as a horror star in the role of Waldemar Daninsky, the eternally recurring lycanthrope. Throughout the 1970s, Naschy played nearly every traditional horror archetype, and this supporting role, done as a favor to the director, takes him close to the territory of cinema's most famous gravedigger, Jose Mojica "Coffin Joe" Marins. But Naschy puts his own spin on the gravedigger character, which he was allowed to rewrite to his own satisfaction, by making him a passionate necrophiliac, one who can only be attracted to living women when they pretend to be dead, like the wicked widow Nadia, who has some use for poor Igor. 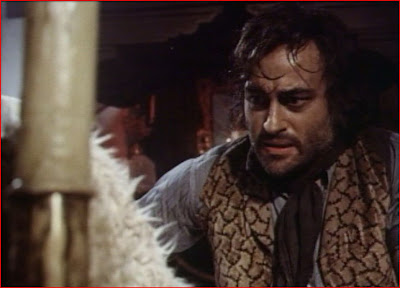 "Ick... You're alive!!!" A disgusted Paul Naschy recoils from life in The Hanging Woman.

Nadia was married to Count Mihaly, whose funeral opens the film. She got the shaft in the count's will, with most of the estate going to his daughter Mary, who we find invading his crypt in search of a mysterious document left on his person. A shadow overtakes her suddenly, and we cut to the arrival of Serge Chekov in the Macedonian town of Skopje. This may confuse purchasers of the DVD, which claims that Serge will arrive in a Scottish village. But Scotland, Skopje, what's the difference, right? Anyway, Serge grumps his way through town, fearful of robbers, until he hears suspicious noises in a cemetery. He then drops his bags and goes inside, gun in hand in search of danger. When he emerges, his bags are surprisingly where he left them, but there's also a Hanging Woman, who happens to be Mary. 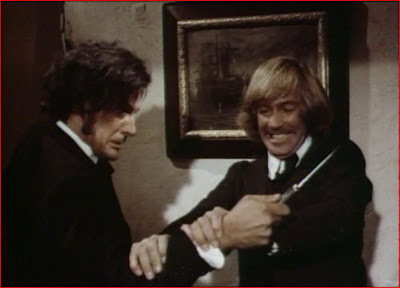 As Paul Naschy helpfully explains in an interview, Stan Cooper (right) "was an Italian actor who called himself Stan Cooper." What more need be said?

Mary's demise actually puts Serge in line to control the estate, which makes him a focus of suspicion in her death. It also makes the people of the estate interested in his welfare. These include Nadia and Ivan the Butler, who has bedroom privileges with the mistress, as well as Prof. Leon Droila and his daughter Doris, another of Nadia's servants. Serge establishes his dominance by casting out Ivan and making him dance to a bullet beat, cowboy style. It develops that Nadia would like to make her fortune by selling the estate, while Prof. Leon wants the family to keep it so he can continue some experiments he'd collaborated on with Count Mihaly. The Prof. is the Herbert West of Macedonia, having managed to reanimate a dead frog by "plac[ing] it under a charge superior to what it had when it was alive." This intrigues Serge, who can't help wanting to see that frog at full power. He proves himself rather a prick by persuading poor Doris to strip for him as if she'd need to offer herself to him for her dad to keep his lab, but we see him growing a wee bit of conscience by making the tearful girl get dressed "before I begin to feel guilty over all this." From this point we are to accept him as the hero of the picture.

An interesting angle to the story is Nadia's dabbling in spiritualism and the dark arts. She jabs needles into voodoo dolls and suggests a seance to contact the spirits of the recently killed to find out who offed them. As it happens, the late Count Mihaly accepts the invitation, but embraces Nadia a tad too enthusiastically, strangling her. He arrived, of course, not courtesy of spirits but through science! Things deteriorate from here. Igor, who'd seen it all from his peeping-tom nook, goes more nuts than normal and runs away before being overtaken by a shadow like the one that took care of Mary. He's found stuffed inside a stone wall, the message, "No 37" written in his own blood on a wall. Despite Doris's corroboration of the attack by the dead, and Serge's sighting of other walking dead (including Ivan, and who knew he'd even been killed?) Serge is blamed for both Nadia's demise and Igor's. He's held in his own house, handcuffed to a bed, pondering all the weirdness and the significance of "No 37" until he views it from the right angle and solves the mystery. Of course, he still has the dead to deal with, and their master.... 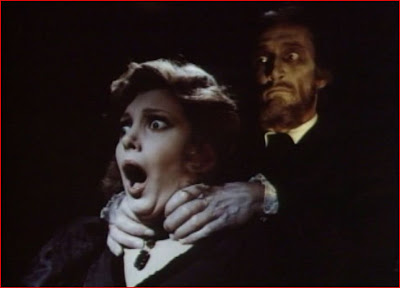 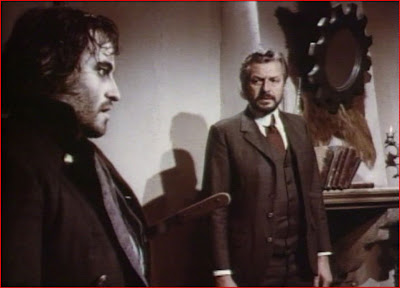 I watched The Hanging Woman with a friend who likes horror movies but doesn't care for Euro-horror as a rule. He thought it did a good job of misdirection on the mystery side and he admired the atmosphere of the ruinous locations. That matched my own impression. It's on too small a scale to live up to its ballyhoo, but still manages modest entertainment. Naschy is often tangential to the main story, appearing as something of an added attraction who does his thing with the dead, attacks Serge every so often and gets chased around a lot before becoming one of the dead ones. He brings a barnstorming intensity to his scenes that most of the other actors lack, and he makes Igor a believably sick and almost sympathetic character. You can understand from this relatively small sample why the man has a following today. As Serge, Stan Cooper (a stage name for one Stelvio Rosi) does some scenery chewing of his own, coming across in looks and manner as if Chuck Norris circa 1979 were playing Basil Rathbone's part in Son of Frankenstein the way Rathbone played it. As the eventual villain, Gerard Tichy segues effectively from calm authority to calm menace even as he offers ludicrous explanations for the undead phenomena. It has less to do with the reanimation apparatus we saw earlier than with capsules inserted into moribund brains that respond to thought patterns. Maria Pia Conte as Nadia and Dyanik Zurakowska as Doris have an entertainingly bitchy relationship for a mistress and maid, adding to the somewhat campy fun of the film. 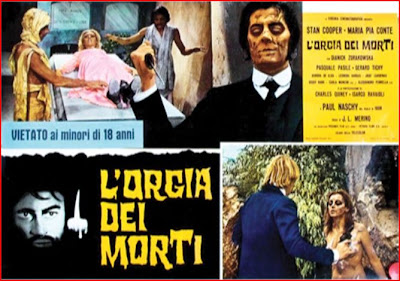 La Orgia de los Muertos isn't a major item in Spanish horror or Paul Naschy's filmography, but for people looking for fresh vintage horror this October it's hard to go wrong with Troma's bargain-basement DVD, which includes interviews with Naschy and the director, who also contributes a commentary track -- and a second Spanish feature, a black-and-white item called The Sweet Sound of Death that I'll review later. Naschy fans and Spanish horror buffs are sure to enjoy it, and more general Euro-horror enthusiasts may like it as well.

Here's a new trailer Troma put together to promote the DVD, which contains the original U.S. trailer in rather rough shape.

Samuel Wilson! Would you like to write for the Fang Of Joy zine? It's dedicated to Eurohorror and gialli. Professor Brian O'Blivion of The Cathode Ray Mission recommended you and I slapped my forehead because I should have asked you sooner. Email me, duder. doomedmoviethon(at)gmail(dot)com

I've still got some copies of issue #2: