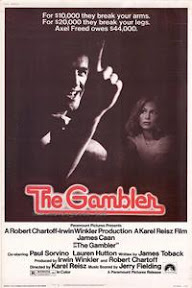 Here's a movie I remember vividly from my childhood in the 1970s, though not for having seen it (it was rated R, after all) but from an indelible ad campaign that focused on the image of James Caan standing over a black jack table, his head transfigured in the radiant beams of an overhead light, a scene that proves even more powerful in the film itself as Jerry Fielding's Mahler-esque music plays over a moment of implausible triumph for Caan's seemingly doomed title character. I'm just getting around to seeing Karel Reisz's movie because the Albany Public Library acquired the DVD. In a way, it's as much of a horror film as some of the others I've looked at this month, but it's a matter of moral horror rather than outright fright. 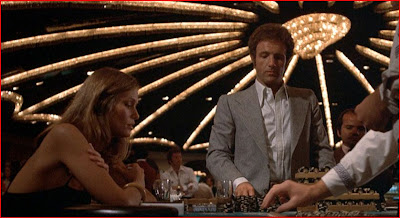 Caan plays Axel Freed, grandson of a furniture store magnate, son of a doctor (his mother, that is) and a professor of literature in a New York university. It reads like the genealogy of the American dream, but Axel is driven by personal demons to risk ruin through compulsive gambling. As the film opens, he's in debt and sinking deeper at an illicit casino run by Hips (Paul Sorvino). He's humiliated by having to ask his mother for the money to pay off his debts, and there's an unspoken dissatisfaction with his own profession compared with the grandpa he idolizes, an old lion he toasts at an 80th-birthday party as "this killer, this king." As a professor, Axel is neither, but as a gambler he comes closer, so he seems to think, to the manly ideal. He only makes $1,500 a month at the school, and the gambling is in part an attempt to achieve autonomy. Having gotten the money he needs from his mom to pay his debts, he abruptly decides to wager it all on college football after grandpa advises him to dump his girlfriend Billie (Lauren Hutton). Why should he dump her? Because grandpa says she's the type for a "playboy," not for a scholar, or for that matter a Jew. But Axel can't deny either side of himself, and gambling is his self-destructive form of self-realization. "If my money's gonna blow," he says, "I'm gonna be the one that does the blowing." 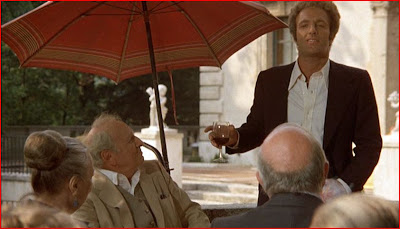 Family ties: Cann toasts Morris Carnovsky (above) and takes his lumps from
Jacqueline Brooks (below) 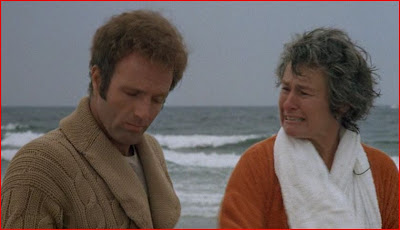 James Woods won't authorize a withdrawl because Brooks, a doctor, only carries one form of I.D. in 1974. Caan tries to make him see reason (below). 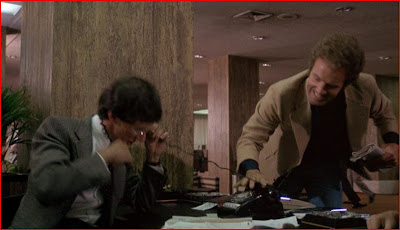 Not waiting to learn how the games turn out, he takes Billie to Las Vegas, where he has an incredible run of luck culminating in the godlike moment when he seemingly wills the dealer to give him a three to make twenty-one. But in Vegas he seems far from a compulsive character. He never stays at one table or one casino for long, and he always quits while he's ahead. It's as if once he achieves that feeling of power that comes from winning, he doesn't need the rush of risk, or what he later describes as "juice," for at least awhile. It's a good thing, too, since all three teams he picked lose. That would have wiped him out if not for his Vegas winnings, but losing half drives him to bet the rest on a single basketball game, with disastrous consequences. Now dangerously in debt to unsavory forces, he's pressured to lure one of his students into a point-shaving scheme on which Axel's own life depends. 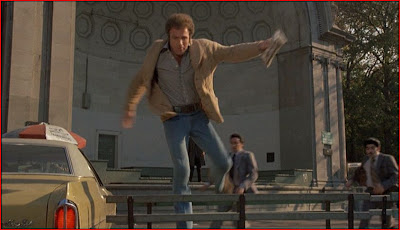 So why does Axel gamble? If anything, James Toback's script tries too hard to explain it or make what's irrational rational in psychological terms. Family issues are clearly a factor, but as Axel tells Billie, "I like the uncertainty of it. I like the threat of losing. I like the idea that I could lose, but that somehow I won't because I don't want to." Accepting risk is an act of will or will to power. Teaching Dostoevsky, he defines will as the power to decide that two and two make five. Teaching William Carlos Williams, he uses the poet's critique of George Washington to show that avoiding risk is contemptible. As he tells Hips, gamblers have to be willing to lose; "If all my bets were safe there just wouldn't be any juice." Hips himself never gambles, since he understands, as Axel does, that the worst gamblers are "all looking to lose." But there's a manhood thing to it as well, which another bookie confirms when he tells Axel, "I've seen nuts before, but you've got watermelons." Finally, there's a self-destructive urge tied to an obvious guilt he feels (whether justified or not) at not living up to his grandfather or mother's achievements. This thread is taken up in a strange closing act in which he enters the ghetto, feeling guilty over corrupting his student, picks up a prostitute, then picks a fight with her pimp (the inevitable Antonio Fargas). He emerges with his face disfigured, as he knew might have happened if he hadn't paid back his creditors, but he gazes on the fresh, flowing scar as if it's a kind of badge of honor, or the mark that will identify what he is once and for all to people who think him or want him to be something else. 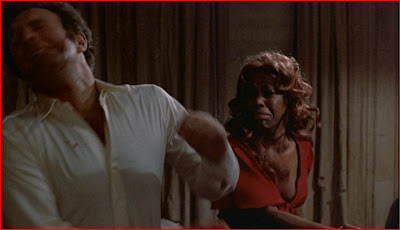 Director Reisz actually freeze-frames on this moment to intensify the instant of Caan's wounding.

Whether you're convinced by these explanations or not, you're more likely to be persuaded by James Caan's powerhouse performance. He expresses Axel's complexity more effectively than the script can explain it, and he has a strong supporting cast to play against, including Morris Carnovsky as the grandfather, Jacqueline Brooks as the mother, and Burt Young, Vic Tayback, M. Emmet Walsh and a quite young James Woods in smaller roles. In other words, it's a rich cast strongly directed by Reisz, but it's Caan's show all the way, and a harsh portrayal of a man for whom self-abnegation is an act of monstrous ego. It tells you about the depth of quality in Seventies cinema that The Gambler got no Oscar nominations (though Caan was nominated for a Golden Globe). But don't let that official neglect lead you to ignore this film.
Posted by Samuel Wilson at 9:24 PM

I liked this one, although I didn't see or hear of it until a few years back. One trivial scene struck me: Caan putting in his contact lenses. How many movies show that?! Odd, considering how many people wear them.

News of first time screenwriters who pen spec scripts based on their own personal life experiences and actually – miraculously, really - see the film get made and released are always inspiring. The ones that always spring to mind for me are Robert Mulligan with Summer of 42; Douglas Day Stewart with An Officer and A Gentleman; and James Toback with The Gambler.