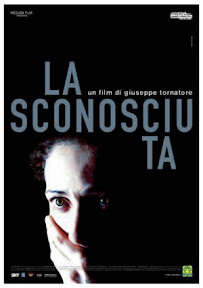 From the director of Cinema Paradiso comes the winner of the David di Donatello award, Italy's answer to the Oscar, for the best picture of 2006. Giuseppe Tornatore's thriller starts out like an Italian version of the "woman from hell" domestic thrillers that were so popular in the U.S. in the 1990s, only to head off in the direction of classic female revenge pictures without quite getting there. It's a stylish, sometimes shocking picture that ends up being a little less than meets the eye.

Early on, La Sconosciuta gives off a bit of a giallo vibe, and an original score by Ennio Morricone only adds to that impression. The first thing we see is a group of three women, dressed only in underwear, but also wearing white masks over their faces. They're replaced by three more women, similarly clad and similarly masked, as someone watches through an eyehole in a wall. Keeping things mysterious, Tornatore cuts to his heroine Irena (Ksenia Rappaport) en route to the town of Velarchi. She has less savory flashbacks along the way -- fleeting indistinct glimpses of what looks like nasty business.

We get more flashbacks as she establishes herself in Velarchi, taking an apartment across the street from a condominium, insinuating herself as a cleaning woman in the condo and befriending the maid for the Adacher family on one of the upper floors. Irena is very interested in meeting that family and possibly working for them. She proves to be quite ruthless about this. Taking in a movie with the maid, she nabs her keys to the condo, dashes out to get them copied and manages to get the originals back in the maid's pocketbook without the old lady noticing. She uses the keys to sneak into that apartment and look around -- for what, we don't know yet. But to get in there on a regular basis, she's going to have to deal with the maid. And so she does, tripping her down a long spiral staircase -- giallo-esque, no? -- until the old lady cracks her head on the floor and starts the blood flowing.

Irena is one of many applicants for the Adacher maid vacancy, and lands the job despite lying about being able to drive. One of her main responsibilities is tending to the Adacher's young daughter, Thea. She has a sort of neurological disorder that leaves her without many of the usual instinctual defense mechanisms. If Thea falls, for instance, she won't throw her hands out to break the fall. Irena makes a bad first impression on the little girl by bumping into her, and Thea figures out early that Irena is not an excellent driver. But Irena deters Thea from ratting on her by threatening to rat on her for eavesdropping on her parents' arguments. After this rocky start, Irena is determined to win Thea's confidence and toughen her up so she can stand up to the school bullies who exploit her weakness.

What is Irena up to? The flashbacks let us piece a story together. Irena is a Ukrainian woman who got caught up in the international sex trade. She had it rough in what looks like a rape camp where she is beaten and manhandled while other women are whipped in harsh, fragmentary scenes that are more suggestive and troubling for being brief. But she displayed a defiant spirit that impressed a bald thug by the name of "Mold," who got her out of the rape camp and turned her into a baby mill. She had nine children in a twelve-year period, all to be taken from her at a profit to Mold. But the system went wrong when she actually fell in love with a handsome young man who innocently offered her strawberries one hot day. Their idyllic romance, filmed with blazing haziness, ends with a kind of illegitimate pregnancy -- he knocks Irena up without paying for it. He pays later. Enraged that this baby, one she actually wanted to keep, was also taken from her, she takes it out on Mold in the film's goriest sequence, ripping into him with scissors before running off with his money.

It becomes obvious that Irena believes that Thea is her lost love child. But she seems less interested in running off with the girl, if she's interested in that at all, then in mentoring her in a disturbingly brutal fashion. Irena wants Thea to stand up for herself. To train her in this discipline, she ties the girl up with scarves so that her legs are locked together and she can't move her arms. Spreading blankets all over the floor, Irena repeatedly knocks the girl down, exhorting her to learn to stand up on her own. When Thea manages to rise, Irena knocks her down again. Initially playful about it, Thea grows angry and fearful as Irena proves unrelenting. Worse is to come when Irena conducts another round of these exercises on the bare hardwood, despite Thea's bawling protests. Up to this point, I'd thought that Unknown Woman was a film that could have gone over with American audiences if someone had been willing to dub it into English, ballyhoo it properly and put it in wide release. But these training scenes, even though they pay off in a scene where Thea fights off her schoolyard tormentors, would probably be deal-breakers for U.S. viewers, since Irena's methods are hard to distinguish from child abuse.

Clara Dossena as Thea (bound, left) probably deserved some sort of award for an often harshly physical performance that Americans probably wouldn't expect (or accept) from a child actor.

The question of Irena's ultimate goal continues to hang over the film. Her ruthlessness early in the picture seems like it should have been motivated by more than a desire to instill some assertiveness in her presumed daughter. That ruthlessness persists as we learn that she's been helping the now-crippled old maid to write checks that subsidize Irena's activities, even though she's got loads of cash stuffed in her own apartment. She behaves like a villain, or perhaps like an avenging antihero, but Tornatore gradually turns her into a victim and a woman in peril. At Christmastime she gets the crap kicked out of her in an alley by a couple of streetcorner Santas. Then we learn that Mold, the man she and we thought she'd killed with those scissors, got better and wants his money back. Meanwhile, Mrs. Adacher, increasingly suspicious of Irena, starts stalking her in a reversal of the first part of the film, unwittingly putting herself in danger. Irena finds herself being framed for murder, but there are still plenty of twists and directorial tricks to come in the final half hour....

Buon Natale, Irena! The Santas do a war dance on our heroine (above) while Mold (Michele Placido, below) lies in wait for an unwary Mrs. Adacher (Claudia Gerini) as a worried Irena looks on.

La Sconosciuta is the first Tornatore film I've seen. Critics of his most famous film, Cinema Paradiso, call him a manipulator of emotions, and in Unknown Woman he arguably deserves that rap. I've already explained my problem with the character of Irena: her vague intentions don't seem to fit with the extreme measures she takes. Tornatore seems more interested in toying with the audience and pushing emotional buttons than in maintaining a consistent tone with the character. He wants to play tricks, and his ultimate trick is almost a parody of twist endings, though it's not quite the end of the picture. The actual end comes ten years after the main events of the story, a perhaps-implausible happy ending that affirms a bond that transcends genealogy and any memories of abusive conduct.

But if Sconosciuta's story trembles under scrutiny, it is at least a sleek, slick, often stark thriller with terrific location work in Velarchi, beautiful compositions by Tornatore and cinematographer Fabio Zamarion, and a dominating performance by Donatello winner Ksenia Rappaport. She gets to age about twenty years over the course of the story from victim to schemer to tired middle-aged woman, and she manages to embody a complexity in her evolving character that Tornatore can't quite encompass in his story. Ennio Morricone also won a David for a score that saturates the film with music, and the juxtaposition of his romantic lullaby theme with the brutality of the flashbacks is consistent with the good old Italian tradition. This is a movie that could easily have been an Italian horror film, and it reflects some influence from the genre. But Tornatore's main purpose was to toy with genre expectations by making audiences expect a certain kind of film, then another, and thus keep everyone guessing until the end, and that makes Unknown Woman a kind of genre picture itself. But that just means that fans of Italian genre pictures will find much of the film of interest, and a good deal of it quite worth seeing, even if it isn't necessarily satisfactory as a whole.

There's a remarkable teaser for La Sconosciuta on the Image DVD that is almost purely pictorial. None of the trailers available online really equal it, but here's one uploaded by ee6db

Good stuff as usual, Samuel... and you definitely have me intrigued because the only Tornatore that I have seen is Cinema Paradiso. I'll try and check it out soon.