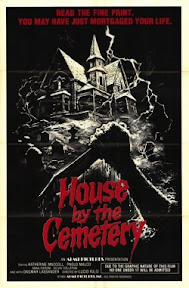 My limited acquaintance with the work of Lucio Fulci has been a mixed experience. I love Zombie (aka Zombi 2, Zombie Flesh Eaters, etc) for its straightforward luridness and one of the most awesome moments in all cinema, the underwater battle between a zombie and a shark. But I took a look at The Beyond back when it had a run in the art houses about a decade ago, and my response was somewhere between "Huh?" and "So?" The dead rising to eat people I could deal with, but the other film somehow didn't make sense. So is it me, or is it Fulci? The rubber match is his haunted house/mad doctor gorefest, which I watched on a cheapo DVD that presumably reproduces the version first seen by American audiences. Better versions exist, but I found this in a bargain bin at a price which, given that the film was at least letterboxed, I couldn't resist at this time of year.

It's a film of its time, which is to say long enough after The Shining came out to reflect its influence. The influence is most obvious in a little boy's ability to communicate with a little girl in an old photograph. The girl is warning Bob not to move in to a particular house in New Whitby, Massachusetts, where Bob's dad is going to do research, but where the previous occupant killed himself after apparently slaughtering his own family. Before the credits, the abandoned house serves as a passion pit/deathtrap for the archetypal horny teens, one of whom gets a big knife thrust through her skull so the point comes out of her open mouth. She's dragged away by a mostly unseen entity.

The little girl who lives in the photograph comes to life in House By the Cemetery.

Bob's dad begins to piece together the story of Dr. Jacob Freudstein (that's "freud-steen."), an even earlier tenant who was buried in the basement according to a crypt marker the family finds. Bob himself learns more from the little girl in the picture, who looks very much alive to him once he reaches New Whitby. She shows him the grave of a Mrs. Freudstein (still "freud-steen.") but divulges that she "isn't very dead." Meanwhile, a realtor and a briefly -suspicious maid learn that there's still a menace in the basement, and it likes to cut throats, repeatedly, before dragging the bodies away.

The thing in the House by the Cemetery is pretty sloppy, leaving behind great streaks of blood for the maid to clean up, then killing the maid and leaving whole pieces of her behind.

Fulci takes an old-school approach with this menace, keeping it mostly out of view for most of the picture to build up anticipation of the big reveal. The fact that it's a single menace rather than an army of monsters is also rather retro for this director. Leave the gore out of it and it's a pretty conventional horror film. But you can't leave the gore out because that's the point of Fulci's films, or at least those I've seen. He's interested in creating a particular kind of fear. If older horror provoked empathy for victims in peril or a sympathetic dread that you might experience a similar fate, Fulci dares you to witness atrocities. This is a perfectly legitimate approach to horror, and not to be dismissed as a cheap sensationalist substitute for classic horror's power of suggestion. But here the gore scenes seem secondary, part of the buildup for the ultimate reveal of Dr. Freudstein ("freud-steen," remember.) in the basement.

As the story's been pieced together, the good doctor has been in the house for more than a century, keeping himself alive by blasphemous means and from appearances doing not a great job of it. He kills people and somehow uses them to revitalize his cells, but it looks like more than that is going on. The reveal is worth the wait as we see one sick creature, its face worn away to near blankness, slow moving but equipped with a powerful claw-like right hand that can rip a man's throat out when knives aren't handy. He grunts rather than talks but seems to be able to imitate crying children. Stab him and he bleeds maggots. His mere existence is an atrocity. Freudstein is one of the most repellent movie monsters I've ever seen.

But there must be more to the house by the cemetery than Freudstein's experiments and crimes. It turns out that the girl who befriended Bob is Freudstein's daughter from the 19th century, who with her mother somehow escaped their monstrous breadwinner by entering into (I guess) another dimension where Bob himself takes shelter at the end of the movie. So did the presence of such a bend in reality perhaps drive the doctor mad or is it just there for the sake of adding another weird element to a film that'd be quite weird enough without it, thank you? Since there often is no "why" in European horror, expect no firm answer from Fulci, but sometimes the absence of a "why" is an intrinsic part of the horror.

Somehow, it hangs together, even if held together more by suggestion, or even inference, than logic. The whole business with the girl and the other dimension is more a matter of poetic license, if I dare say that about an Italian gore film, than a practical dramatic element. House By the Cemetery has the dream-logic of a nightmare, and there isn't really an objective standard for appraising such things. I liked it better than I did The Beyond, but it's nowhere near as much fun as Zombie, but I don't think it was meant to be. I liked it faults and all, but someone not liking it would be perfectly understandable. Whatever its rank in the Fulci filmography, I'd risk recommending it to people looking for a creepy and nasty movie for the Halloween season.

Great review for one of my favorite Fulci flicks--even if it's not one of his best. This has become one of those movies that I pull out and watch near Halloween (just like you suggest)--it's ridiculous and fun and has a great nightmare vibe (which you also pointed out). A lot of people love The Beyond and even call it his best--I'm not one of those people. While I like the film (the score even more), It's nowhere as good as his earlier films like A Lizard in A Woman's Skin, Don't Torture A Duckling, Perversion Story, and Beatrice Cenci. His splatter era films are fun, but he was a firing on all cylinders in the late 60's, early 70's. I'll shut up now because I could talk Fucli all day. Great review!

You're right about its dreamlike quality. It's one of the lesser Fulci's for me, but definitely the last time he was ever worth talking about (although his 8 1/2 esque A Cat in the Brain is worth checking out)...

If you can ever find the uncut version it really is worth checking out. There are some pretty gruesome moments. I agree with your assessment on Freudstein. He's a pretty damn cool movie monster -- I like that he's not a zombie, he's more like a character out of Lovecraft. It makes it creepier that way.

I am quite fond of The Beyond, though, and find it more tolerable than this film. I think that House is the weakest of the "Gates of Hell" trilogy (the other being the infamous City of the Living Dead), but it's not without its charms; and having re-watched it the other night in preparation for my blog-a-thon, I found it, like you, to be quite the creepy, atmospheric haunted house film.

Nice review! I'll make sure I link to this on Monday when my Italian Horror Blog-a-thon kicks off.

I remember the first time I watched this way back in college being kind of ho-hum about the whole thing, right up until the big reveal, which pretty much knocked me out of my seat. Not that it surprised me--if you've seen any amount of horror you know it's coming--but as you point out, the sheer repulsiveness of Freudstein is a real shocker. I remember actually getting a little queasy, particularly on the bleeds-maggots bit. He's definitely in the top 10 of disgusting monsters of cinema...which is a list someone needs to put together!

Speaking of big reveals, I kept waiting for the payoff of the "freud-steen" notes. Did I miss it? Is it because I can't watch the trailer from work that I'm not in on the reveal? :)

Great write-up...you actually have me considering digging this one out for a spin. ;)

When I saw The Beyond I was still just starting to acclimate myself to Italian horror. I suspect that I might think better of it if I saw it again now. But I think I might still consider House the better film because Freudstein (and I'm just trying to enforce proper pronunciation, folks, so that you don't offend some distant descendent when he's teaching in your classroom;))is a more distinctive menace than another bunch of zombies. For future Fulci reference, I should be seeing Lizard in a Woman's Skin before the end of the month.

What did I find oddest about HOUSE BY THE CEMETERY? A child named "Bob."