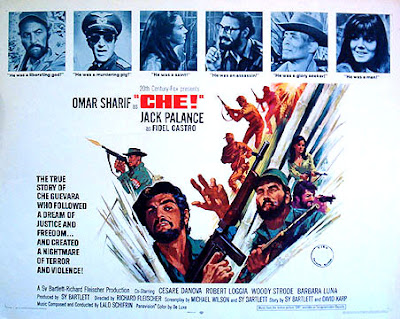 Nearly forty years before Stephen Soderbergh released his four-hour two-part Che Guevara biopic to respectfully mixed reviews, Twentieth Century-Fox released Richard Fleischer's much-reviled version of the Guevara story, which gets the job done in just over 90 minutes. Ever since, it's been condemned for its outlandish casting of Jack Palance as Fidel Castro, with many seeing Omar Sharif as equally wrong for the title role. I've just watched the film for the first time on the Fox Movie Channel this morning (hence no screencaps), and as I haven't seen Soderbergh's version yet I feel I can judge Fleischer's effort on its own merits, such as they are.

We find Fleischer still in the modestly experimental mode that distinguished his work on The Boston Strangler, since the film opens with Che dead on a Bolivian slab. The only split-screens we get, however, are over the opening credits, as close-ups of the corpse are juxtaposed with newsreel footage of youth protests around the world. The film itself plays out like a simplified version of Citizen Kane. We get multiple points of view on Che from various narrators, some pro and some contra, but the story plays out in linear order from his landing with Castro in Cuba to start the revolution to his death by Bolivian firing squad. The multiple narrators indicate the movie's plan to tell both or all sides of the story, but they also keep us at a distance from the main narrative since no one raconteur interacts extensively with Che. Since there is no interviewer character to hold these narratives together or even explain them, we end up with shots of characters addressing the camera for no good reason. It ends up looking like a shortcut, since these narrators tell what the film should show.

Che Guevara emerges from the multiple accounts as a once mild-mannered but radical medic who is ordered to stay behind the lines during guerrilla engagements but takes the initiative in a pinch and proves himself more revolutionary than the head revolutionary himself. Palance gives an oddly fussy performance as Castro, but the script conceives him as a character who talks the talk more than he walks the walk, more a pretentious blowhard than anything else. He ends up taking military advice from Che, then taking credit for it, while Che seems more enthusiastic about executing people than Castro was. This would have made Che the villain for some viewers, but the tone shifts once we get to the Cuban Missile Crisis. Again, we should be appalled at Che's willingness to risk nuclear war, but the script seems to take his side against Castro and the Soviets at least as far as it seems to condemn the political leaders for preferring to hold on to what they have over extending the revolution. In Che's view that makes the Soviets no more than imperialists themselves, and once Castro proves himself more interested in stabilizing Cuba than spreading revolution abroad, Che quits Cuba and lights out for the territory.

The tone shifts yet again when we reach Bolivia. There's actually a payoff to the corpse scenes as the helicopter bearing the body arrives in the background as a Bolivian general takes up the narration. We also get narration from Sid Haig as a Bolivian revolutionary and Woody Strode as a Cuban veteran who joins Guevara's expedition. They relate a mounting disillusionment with Che as he expresses mounting frustration with Bolivians' reluctance to take up arms with him. Haig does quite well in a big scene in which he denounces Che for becoming no better than a bandit by oppressing the people. What went wrong? We're not given cause to doubt that Bolivia was any less oppressive than Cuba under Battista, but the peasantry shows less political consciousness than the Cubans. Their rejection of Che culminates in a prison scene in which an old peasant blames the captured and wounded rebel leader for his goats not giving milk. The old man wants to be left alone by revolutionaries and armies alike. Having heard this, Che gets up and limps into the execution yard, either realizing the error of his ways or simply demoralized beyond hope.

If the film has a moral, it has nothing to do with Communism as either an economic or political system, and everything to do with the great obstacle self-interest presents to romantic revolutionaries like Che and wannabes like his global admirers. Whether it's the realpolitik of leaders like Castro or the simple desire of simple people to be left alone, too many people have a stake in keeping things as they are for revolutionaries to have an easy time. The Bolivia episode forces the question of how far revolutionaries should go. Che makes believable claims of selflessness, but just as he puts little value on his own life he arguably puts less on anyone else's. If people don't want revolution, even if you've determined that they need it, do you force it upon them at gunpoint. Lenin and all his heirs said yes, and look what it got them. On the other hand, does individual complacency overrule the common good. Should no necessary thing be done because it would mean coercing some people? Your answers to these questions will determine your response to any Che biopic.

This particular biopic was probably doomed from conception. It's from the period when Hollywood was willing to try anything to reach the youth market, and from the same studio that hired Russ Meyer to make two pictures. But Che! labors to make concessions to everyone but the presumed target audience of young people for whom Guevara was an unambiguous hero. Since the movie bursts the Guevara bubble, it was bound to be a turnoff for young moviegoers who might already have been turned off by his life being handled by establishment hands. Likewise, the critics of the day probably wanted something that looked more like The Battle of Algiers, preferably with unknown actors; anything different would have been an insult to Che.

But if something can be salvaged from this mess it's Omar Sharif's performance, which I found one of his best. Once the hair grows long and the beard fills out he really does vanish into the role and his intensity carries you through the fragmented narrative. His casting probably annoyed people who wanted a more authentic actor, but Sharif was Hollywood's all purpose ethnic, having played Mongols, Russians, Germans and Jewish-Americans beside his own ethnicity up to this point in his career. He could act, too, and he's worth seeing here in a movie that, in a way, lets him play a kind of Lawrence of Arabia, a foreigner (Argentine, after all) who teaches scruffy natives how to wage war with deeply ambiguous results. Blacklisted Lawrence of Arabia co-writer Michael Wilson also co-wrote Che! so both he and Sharif may have been conscious of the role reversal involved. The two films, one an undisputed classic and the other allegedly one of the 50 worst movies ever made, would make an interesting double-feature.
Posted by Samuel Wilson at 3:20 PM