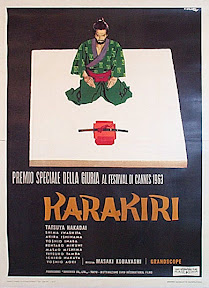 One fine day in 1630, a masterless samurai, a ronin, turns up at the gate of the courtyard of the Iyi clan. He has an unusual request: rather than live a deteriorating life of poverty, he would like the use of the courtyard to commit seppuku in a manner befitting a onetime samurai. Actually, this isn't the first time someone like this has shown up with this sort of request. Not so long ago, another ronin, in fact from the same disbanded clan as the new man, turned up with the same story. Already, by this time, the Iyi had grown suspicious of such stories. Word's got out that a ronin went to another clan, supposedly for the same purpose, but the saps in that clan were so soft hearted that they made the bum a retainer. Now the Iyi work under the assumption that anyone who turns up on their doorstep asking to kill himself is actually looking for a job or a handout. Rather than tell them to hit the road, the Iyi try to make examples of them by holding them to their word. They made sure that the last guy killed himself, the new arrival is told, even though all he had in the way of weapons was a bamboo sword. It's damn hard to disembowel yourself with a bamboo sword, and director Masaki Kobayashi illustrates this point in excruciating detail.

With a bamboo sword you can barely penetrate your flesh, much less disembowel yourself. Akira Ishihama demonstrates in Harakiri.

The latest sucker seems more determined to follow through on his desire to end his life. All he requests is to choose his second, the man who'll decapitate him once he's finished disemboweling himself. He has a specific person in mind, a known master of the sword, but it turns out that this individual is indisposed due to illness. The ronin goes through a second and third choice, both of whom are also too ill to come, before the Iyi counselor gets tired of the whole affair and tells him to accept the second that the clan had chosen. But if the ronin can't have the one thing he requested, the least the Iyi can do is listen to his life story. After all, he could kill a few of them if they try to force the issue. Fine, the counselor says, but make it quick.

It so happens that Hanshiro Tsugumo (Tatsuya Nakadai) is the father-in-law of the previous victim, Motome Chijiiya. He'd raised the kid since the kid's father killed himself after the disbanding of their clan. The new Tokugawa shogunate is shutting down a lot of the great clans, dumping the once-proud samurai on the street. Hanshiro himself has a little girl to raise as well as Motome, and he's been instructed not to kill himself, but live for both the kids' and his lord's sake. Fortunately, he's a kind of craftsman and develops a trade in parasols, making a living while other ronin struggle or starve. In time, Motome marries Hanshiro's daughter Miho and they have a child. They're a kind of success story, but things fall apart once Miho contracts the Movie Disease. Soon the child also grows sick while the men spend all their resources and let their business fall apart trying to get their loved ones proper medical care. Ronin were not allowed to carry over their daimyo's health insurance plans, apparently, when their clans were disbanded. It was at a moment of supreme desperation that Motome paid his foolhardy, fatal visit to the Iyi clan. The three swordsmen who are now very coincidentally ill were the ones who brought Motome's body back to Hanshiro, explaining with barely veiled contempt how he had honorably ended his life.

What's the moral of this story, the Iyi counselor asks impatiently. The moral, Hanshiro suggests, is, don't you guys think you were a little hard on Motome? Don't you want to admit that maybe you should have asked why he wanted a sudden reprieve before forcing him to torture himself to death with that bamboo sword? Hanshiro was hoping that he might be able to tell Motome, when he meets him in the afterlife, that these Iyi creeps were just a little sorry for what they did. Not a chance. While Hanshiro dares claim that the samurai code of honor is now an empty facade, the Iyi insist that they've restored the code by forcing these losers to live up to their words by killing themselves. Anyway, the counselor asks Hanshiro, if you think the code is so much bull, why would you think we'd apologize?

Probably he didn't think they would. But before we wrap things up, Hanshiro has some lovely parting gifts for the Iyi. They are clumps of hair with name tags: samurai topknots. As flashbacks reveal, Hanshiro has already avenged his family by defeating the three swordsmen but sparing their lives, only taking their topknots. Doing that, however, is the supreme, unendurable humiliation. Those three swordsmen should have killed themselves, but instead they're hiding at their homes pretending to be sick. So much for the honor of the Iyi clan. And so much for the counselor's patience, as he orders his retainers to cut Hanshiro down. But this is a Sixties samurai film, no matter how subversive of the genre and its social context, so you know that Hanshiro isn't going down without a long, bloody fight....

Harakiri reminded me a lot of American films from the Depression era like William Wellman's Heroes For Sale, which is also a tale of a warrior kicked to the curb and left to fend for himself in times of peace. In a way, it also reminded me of Ted Kotcheff's First Blood, especially since the spurned warrior in Harakiri finally fights back against the oppressive society. Some people could read the Kobayashi film as an indictment of Japan's treatment of World War II veterans, but critic Donald Ritchie in his filmed intro to the Criterion DVD describes it as a frontal assault on the samurai genre itself. There's a tendency in Japanese cinema to attack the conventions of their own popular fiction, to debunk the myths they helped to create. Kinji Fukasaku did it with yakuza stories, and Kobayashi probably isn't the only one to debunk the values promoted by more conventional samurai pictures. Harakiri's slow-burn structure may be part of the subversive effort, since it denies us a real samurai swordfight until nearly two hours into the movie, and the only violence we get before that is Motome's gruesome death scene. After all, it's because there are no proper occasions for fighting anymore, thanks to Tokugawa, that ronin are reduced to their pitiable state. So Kobayashi and his writers delay the gratification samurai fans presumably craved, repeatedly going back in time, first as the Iyi tell Hanshiro their version of Motome's fate, then as Hanshiro tells them his version.

But when Kobayashi finally relents, he delivers one of the greatest samurai fight scenes I've ever seen, pitting Nakadai against Testuro Tanba in a windblown grassy field beneath an overcast sky. The editing and outdoor cinematography are brilliant in this long battle by samurai-cinema standards. This fight is structured by editing rather than choreography, with an emphasis on pictorial effect rather than seamless flow of action. I want to call it expressionistic in the same way that some of the boxing scenes in Raging Bull are expressionist rather than realist. Camera angles, light and shadow, and the poses of the actors add to the emotional intensity of the moment.

This epic one-on-one encounter, related in flashback, is followed by the big finish as Hanshiro fights his way into the Iyi headquarters and desecrates their ancestral armor. By the standards of insane, Wild Bunch-style bloodbath finales of films like Sword of Doom, Hanshiro's final rampage is relatively modest in keeping with Kobayashi's social-realist intent. We're actually given a final body count of only four killed and eight wounded, when Zatoichi in similar circumstances might have wiped out dozens of men. But the odds are against Hanshiro, and you're never allowed to forget that or really believe that he might somehow fight his way out or avenge himself on the Iyi counselor. In any event, Kobayashi's point seems to be that Hanshiro has already won his battle, by showing the counselor how his men had failed to live up to their vaunted code. But power gives the counselor the last word of the story, and the final irony is that history will record that Hanshiro actually did commit seppuku the way he supposedly meant to -- and that a lot of Iyi retainers suddenly got sick and died.

Harakiri is a film that rewards patience. If you like non-linear narratives you should have no problems with the first third of the film, while the middle section is the piecing together of a puzzle, and the final acts are all-out samurai mayhem. If action's what you want, the last half hour will make Harakiri worth the wait. Enthusiasts of Japanese cinema in general probably won't have to wait long before recognizing this as a great film.

Posted by Samuel Wilson at 9:21 PM

Samuel - This is an example of a movie that I've been on the verge of watching many times but for whatever reason still haven't seen it. I love the review though and it sounds like something I would definitely be interested in... this is one that I plan on circling back to once I make my way through the yearly countdown. Very well-written piece here.