"Wendigo" is the nom de net of one of my oldest friends and the biggest vampire fan I know. I consulted with him nearly a year ago when Twilight came out and he reviewed it favorably. That seems unusual among horror movie fans, but Wendigo is, in one sense, more of a vampire fan than a horror fan. That is, he is interested in the concept of the vampire and its evolution, and he wouldn't claim that vampires belong to the horror genre. He understands that the vampire has meant many things to different people over time, from the night terror made manifest to the modern power fantasy, from the quasi-rape fantasy offered by the master vampire to the forbidden fruit represented by his female counterpart. If anything is consistent about the vampire in pop culture, it's the temptation of immortality and the challenge of its moral cost.

In my own view, the vampire has to an extent lost its potency as a moral threat, so that a vampire in a typical "urban fantasy" story might be little different from an elf in a just-plain fantasy novel. But since the vampire has been a fantasy creature all along, there's nothing inherently wrong with that development. Back when I published his thoughts on Twilight, I suggested that I might get Wendigo to make up a list of favorite vampire films. Now, with Halloween and the release of New Moon impending, he's given me a list in chronological order that takes us from the beginning to last year -- and Twilight is not on the list, nor, to my slight disappointment, is my man Count Yorga the swinging Seventies vampire. I know Wendigo digs the Yorga films (and Deathmaster, too), but pressed to pick ten favorites, this is what he came up with: 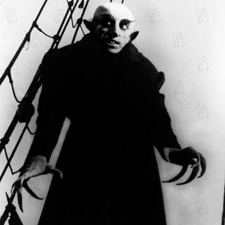 1. Nosferatu (1922). This would be number one if the list were in order of preference as well. F.W. Murnau's silent chiller is still the definitive vampire film in Wendigo's book, and also the one that, for him, comes closest to the essence of Bram Stoker's seminal novel, even if Max Schreck's uncanny Graf Orlok isn't a perfect physical match for Stoker's repellent yet compelling monster. 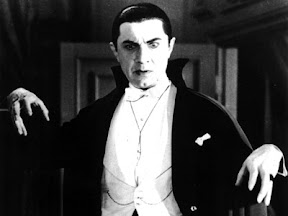 2. Dracula (1931). Bela Lugosi remains an icon for good reason. Tod Browning's film has its detractors, but Wendigo feels it does justice to the Balderston-Deane version of the story, while Lugosi's strange gestures and cadences define the essential inhumanity of the vampire. Bela makes you believe you're dealing with someone who is undead. 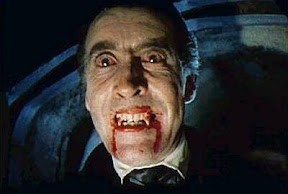 3. [Horror of] Dracula (1958). The neat thing about vampires is that you can have more than one definitive performance. Christopher Lee's Dracula is archetypal in its own right, and counts for Wendigo as the first modern vampire, the period setting of Terrence Fisher's film notwithstanding. More so than Lugosi, Lee personifies the rape/domination fantasy aspect of the vampire and conveys the commanding sexiness inherent in Bram Stoker's concept despite the author's sometimes unpleasant descriptions of his villain. Lee's more virile vampire is what makes him modern. 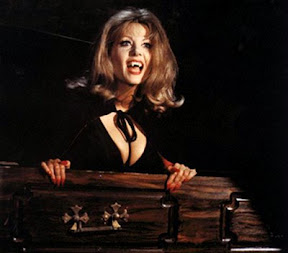 4&5. The Vampire Lovers (1970) and Twins of Evil (1971) are prime examples of the forbidden-fruit aspect of the female vampire. These Hammer films from the "Karnstein" series set new standards for vampire sensuality and remain for Wendigo the best lesbian-vampire films. Twins goes the extra mile in its emphasis on the threat of incest as Peter Cushing struggles with the temptation presented by his niece. In these films the female vampire represents a menace to everyone, the classic succubus for men, the supreme transgression for women. 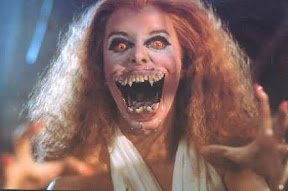 6. Fright Night (1985). Tom Holland's semi-comic horror hit simultaneously looks back to the classical tradition while steering the vampire in a new direction with its innovation of what some people call the "grrr face" as the true visage of the otherwise seductive vampire. Besides the homage to horror hosts of the past, Wendigo likes this film's insistence that faith is necessary to make holy symbols effective against vampires. It was a necessary corrective at a point when all you seemed to need was to cross any two objects together (fingers, even) to turn the undead. 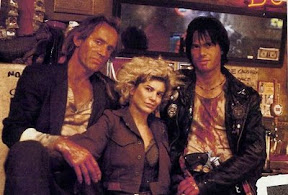 7. Near Dark (1987). Kathryn Bigelow's cult classic pretty much set a template for much of future vampire cinema and vampire literature. Wendigo says it's the first film to really play with the "pack" concept of a society of vampires and their interaction with each other, and the first to effectively imagine white-trash vampires. At the same time, it revives the romantic concept of vampires in the form of an "innocent" vampire that can be redeemed by love. 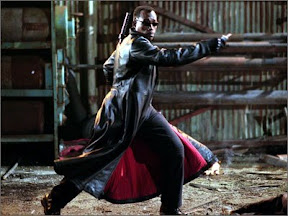 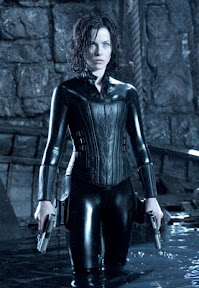 9. Underworld (2003). Replace Blade with a female action hero and you take the vampire adventure genre to yet another level. In addition, Len Wiseman's film brings cinema in line with the burgeoning urban fantasy/paranormal romance genre by introducing all manner of lineages and bloodlines and the mythology of the ancient feud between vampires and werewolves. On top of all this is Kate Beckinsale in that outfit! Who can argue with that? 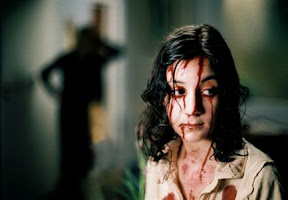 10. Let the Right One In (2008). Yes, this is Wendigo's winner of the great vampire kulturkampf of last year, though I must remind you that he likes both this and Twilight. The Swedish film gets the nod and makes the list because Wendigo was impressed with its more "realistic" presentation of a vampire-human romance as a relationship of profoundly disturbed individuals in an evocatively cold and harsh setting.

That's the list of someone who has read many things vampiric and thought a lot about genre fiction in general. Wendigo acknowledges an Anglo-American bias (the last film being the exception) but believes that his favorites will stand up to the competition from Europe, Mexico or elsewhere. Any such list is bound to be provocative as well as informative, and I'll be keeping my friend appraised of any responses to his list. I think he'd make a great movie blogger himself, and if we get a dialogue going we may yet draw him into the fray on a more regular basis.
Posted by Samuel Wilson at 10:07 PM

That's a hell of a list. I would agree with it for the most part. I don't care for Underworld though, but the rest all tops in my book.

Whoa! I'm not sure if the Rev or Wendigo would agree with me on this one, but "Interview with the Vampire" conceivably belongs on any top ten list of vampire films. The sight of Kirsten Dunst as a pre-teen vampire all but stole the show from its' leads, Tom Cruise & Brad Pitt.

Wendigo wants to emphasize that his list is based as much on his estimate of the films' historic significance as on his admiration for them. He definitely likes Underworld and is glad to defend it, but it made the list mainly because he sees it as defining a new subgenre in vampire cinema. As for Neil Jordan's Interview, Wendigo thinks it simply appeared too late, after other movies had absorbed the influence of Anne Rice's books, so that nothing really struck him as new about it in 1994. Speaking for myself, having not read Rice's books, Jordan's film was better than I expected, and I also thought Dunst was one of the best things about it.

To stir the pot further, Wendigo has given me a supplemental list to fatten this up to a top 20. This list follows the format of the first, starting back in time again before marching to the present:

And to stir the pot further yet, he's preparing a list of his least favorite vampire films for posting later this weekend. Look out!

What about Herzog's Nosferatu? That cannot be out. If Murau's number 1, this has to be close to the top.