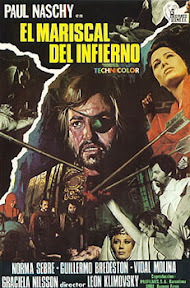 Paul Naschy, the thespian alter ego of writer-director Jacinto Molina, is often called "the Lon Chaney of Spain." There's an appropriate ambiguity to that label. In his most popular character, the tormented werewolf Waldemar Daninsky, Naschy clearly walks in the thorny footsteps of Lon Chaney Jr. In other films, like The Hunchback of the Morgue, his pathetic grotesques are more in the tradition of Chaney Sr. The more Molina took Naschy beyond the conceptual realm of the Universal classic monster mythos, the more his complete body of work came to resemble the broader range of roles of the elder Chaney. Molina wrote the script for director Leon Klimovsky's medieval adventure, crafting for himself the sort of role Chaney Sr. might have played in silent days, albeit with a more modern emphasis on Satanic sleaze, and for extra measure throws in a subtle homage to the great man's most famous role at the end.

An American distributor retitled El Mariscal del infierno to cash in on Seventies Satan fever in the aftermath of The Exorcist, and to pre-empt any assumption that "The Marshall of Hell" was a Spaghetti Western. In medieval Europe, a marshall/mariscal was a high ranking military official and part of the royal household. Such a man was Gilles de Lancre (Naschy), a fictional amalgam of Macbeth and Gilles de Rais, who opens the film by retiring to private life as the lord of his castle and the nearby countryside. He's somewhat disgruntled over failing to get the recognition he feels he deserved, or failing to achieve the greatness he considers his destiny. In retirement, he hopes to win fame as a man of science. 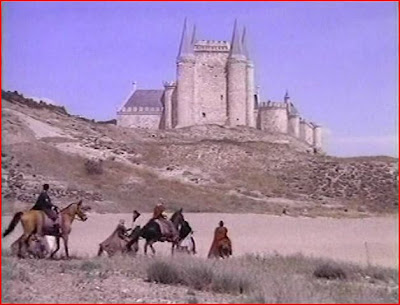 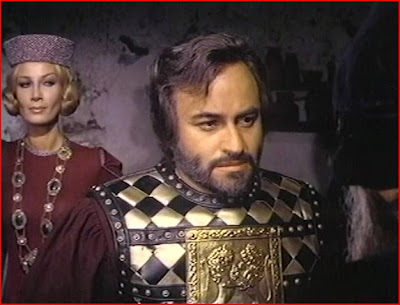 Toward that end, his wife Georgelle (Norma Sebre) has brought "the greatest alchemist ever" into the Lancre household. Playing the Lady Macbeth role, the apparently bamboozled Georgelle encourages Gilles to indulge the alchemist's every demand toward the great project of synthesizing the ars magnus, aka the Philosopher's Stone -- the Sorcerer's Stone to you American muggles. Achieving that will make Gilles, whose greatness is heralded by his falling sickness, worthy to rule all of France. Such a project demands immense and costly resources, including the blood of human sacrifices to Satan. Gilles balks at that idea for about thirty seconds before wifey cajoles him into ordaining murder. From that point, de Lancre becomes the Marshall of Hell and the terror of his land. 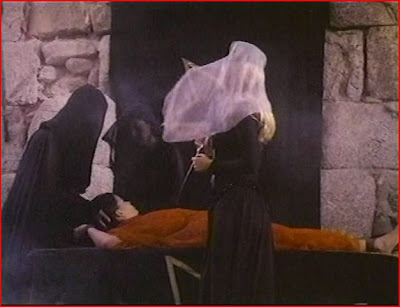 Enter the hero, Gaston de Malebrache (Guillermo Bredeston), one part Banquo (Gilles's old comrade-in-arms) and one part Robin Hood (the noble-turned-rebel version), retiring in his turn from the wars. He rebuffs an attack by rustics, only to learn that they aren't bandits hunting the rich but rebels who mistook him for the tyrant de Lancre. That doesn't sound like his old pal Gilles, so Gaston sets out to investigate after fending off a gang of Gilles's goons in a tavern that seems to have a trampoline hidden somewhere for our hero to bounce on, Fairbanks style. Gilles himself welcomes his old buddy as a dinner guest, but Georgelle urges him to assassinate the "peril" in their midst. Gaston escapes the attempt and flees, joining the rebels who happen now to be lead, following the death of their original head, by Gaston's attractive cousin Graciela (Graciela Nilson), who helps him overcome the rustics' natural suspicion of another noble. 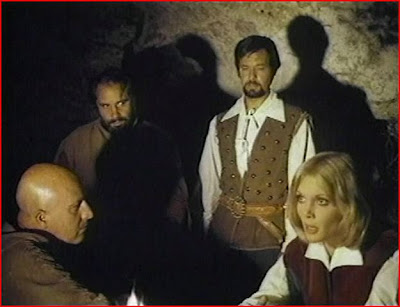 The sides properly formed, the de Lancres and Malebraches go to war, Gaston scoring first blood by entering the lists in disguise against Gilles in a joust and lancing an eye out. Things go downhill mentally from there for de Lancre. He hears the wailing of his victims in a delirium, resolves to repent his evil, only to order the massacre a party of monks when one of them dares call him out for his crimes. Frustrated at the alchemist's repeated failures, and perhaps finally realizing that the old man's a fraud, he kills the crank but carries on the regimen of torture and sacrifice, convinced that he can attain the ars magnus without wizardly expertise. By the time he faces Gaston for the final showdown, he's convinced that the prize is his, making him immortal and invincible. 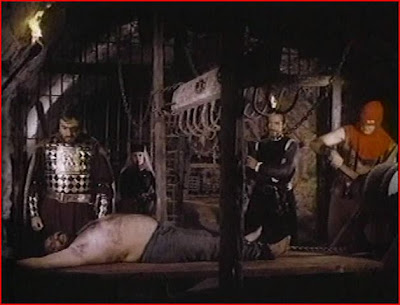 Molina's script and Klimovsky's direction suffer from an imbalance that's inevitable when the star elects to play the villain. Their blend of Macbeth and Robin Hood is awkward, since one or the other must be the dominant character. In the end, the film's Robin Hood, Gaston, is a dull if energetic goody-two-shoes, the rebellious appeal of the archetype undercut by the villain's transgressive charisma. The creators probably recognized this by the end and were determined that Gaston should not defeat Gilles in single combat.

Instead, Gilles strikes a decisive blow and is poised to finish his foe when the rest of the rebels appear. As soon as he was surrounded I knew to expect a Throne of Blood homage with Naschy as a Mifunian human pincushion. But the fun thing about Naschy is that his homages are often multilayered, riffing on more than one influence. Molina was a meta-auteur, and spotting the homages adds to the entertainment value of his films. Here he did not disappoint. Gilles defies his enemies, warning them that he has the ars magnus in his clenched fist, with which he can destroy them all and conquer the world. He unclenches his fist -- and there's nothing there. That's Phantom of the Opera all over the place, when Erik is trapped on the bridge and threatens his pursuers with a mini-bomb, only to open his empty hand and laugh, as if his last word will be, "Psyche!" Unlike Erik, Gilles in his final madness actually thinks he has a super-weapon, but the moment and the gesture are Naschy's bow to Lon Chaney Sr. and Rupert Julian across the decades. At least I saw them that way. 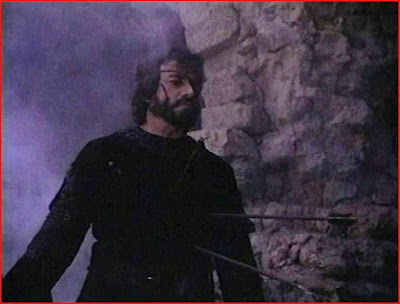 Like Dr. Jekyll and the Werewolf, my copy of The Devil's Possessed comes from Mill Creek Entertainment's Pure Terror box set. This time Mill Creek comes closer to the actual thing. IMDB lists the running time of El Mariscal as 95 minutes, while Devil's Possessed comes in at a respectable 89 minutes. Whether that's the difference between a "clothed" and "unclothed" version I can't say, but there is a notable lack of nudity in my copy of a film full of sacrifices to Satan and attractive Euro actresses. Overall, the film has an appropriately grungy look typical of the more realistic, unromanticized portrayal of medieval Europe dating back at least to The Lion in Winter, enhanced by actual ruined locations. I wouldn't be surprised if more money was spent on costumes than on extras, but everybody looks good, and the eyepatch-sporting Gilles of the final section deserves a place in the Naschy Hall of Fame. Even the cinematography comes off respectably in an admittedly compromised presentation; you can see where they were aiming for something like a Caravaggio look in some of the scenes in the bandits' lair. 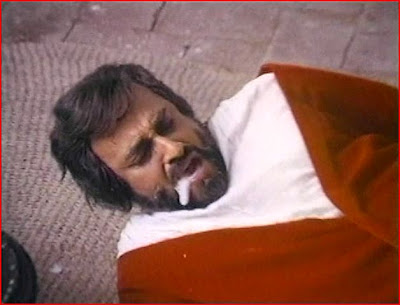 It sometimes seems as if Naschy was obliged to drool some substance in every picture. Below: Whatever you say to Gilles, don't mention the eyepatch! The Devil's Possessed is ultimately a little less than the sum of its parts because of the imbalance of power between Naschy and his co-stars. If you have him as a villain but want audiences to root for the hero, you need one made of stronger stuff than Guillermo Bredeston, I'm afraid, and you should probably change the script to introduce the hero first. The emphasis on Naschy, not to mention on sacrifice and torture, marks El Mariscal as a horror film rather than a swashbuckler in the final analysis; it's closest analogue might well be Rowland V. Lee's Tower of London in its volatile genre mix. In any event, this film is admirable for its ambition, even if that ambition isn't fully achieved.

This is my second and final contribution to the Naschy memorial blogathon organized by Mad Mad Mad Mad Movies to mark the anniversary this week of Jacinto Molina's death. I'm just the tip of an iceberg of terrific tributes and reviews all over the blogosphere. To learn more about the man and his work, just follow the links listed at viceducal headquarters. Happy browsing!

I have the original Spanish DVD of this one, Sam, and reviewed it back in June. There was no nudity in that version, obviously, but if there were none in the English release (I don't have it), then maybe none were shot for export? Kind of odd if not.

Thanks for the clarification. Since there are at least three versions of Horror Rises From the Tomb on one DVD set, we may not have seen everything to Devil's Possessed between us, though you obviously have a more definitive version. If this one was fully "clothed," it just seems like an opportunity missed, though it may also testify to loftier ambitions on the part of Molina and Klimovsky.

Thanks for another great contribution to the blogathon, Sam! I agree with your point that the character imbalance here hampers the overall effect of the film--Naschy seems to be casting about for the right way to play the role in the beginning, alternating between "tempted but noble" and "unrepentant villain" somewhat unconvincingly. For me, though, the movie really picks up once he loses the eye and goes into full-villain mode, and that final duel between Gilles and Gaston is a real slobberknocker. :)

Great point too about the multilayered homage of that final scene--I agree there's a PHANTOM riff there. Naschy always wore his influences on his sleeve, never concerned with covering up who he was borrowing from--quite the opposite, in fact, the most blatant being the FRANKENSTEIN MEETS THE WOLF MAN riffs in both ASSIGNMENT TERROR and WEREWOLF SHADOW.

Again, thanks for helping to make the blogathon such a rousing success!

(Comment verification: "ANTSWAR." Title of an unproduced sci-fi/big bug movie from the 60s?)

Vicar:The plot might have worked better had Naschy followed Macbeth more closely by having his Banquo, Gaston, hanging out with Gilles from the beginning, advising him against that alchemy and human-sacrifice jazz, finally splitting when things got too hot, etc. Instead, he simply seems to appear in response to an "insert hero here" prompt. But I agree that the big duel was cool, and I want to congratulate you and the Duke again on a most successful blogathon tribute to the great man.

To me, "ANTSWAR" looks like the name of an illiterate peace movement, but I can imagine the movie just as well.