Hammer followed the success of Roy Ward Baker's The Vampire Lovers with Jimmy Sangster's Lust For a Vampire, a film my friend Wendigo has seen but once. Once was enough: the lead actress, though quite a looker, was no Ingrid Pitt when it came to talent or personality. Nothing about Lust impressed him, and to have the vampire woman lusting for a man violated the Carmilla concept. Whatever its original audience thought, Hammer persevered and put John Hough to work directing a third "Karnstein" film. This time, though, the British studio brought some extra exploitation inspiration to the project, merging their signature vampire product with the then-hot topic of witch-hunting. The result is a conceptually dynamic film that I prefer to Vampire Lovers, while Wendigo himself has some justified reservations. 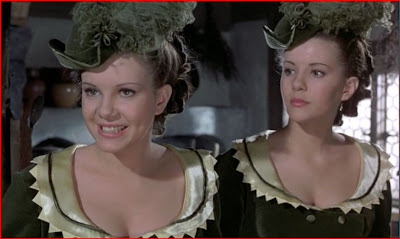 The Collinson twins differentiate themselves gradually over the course of the film. 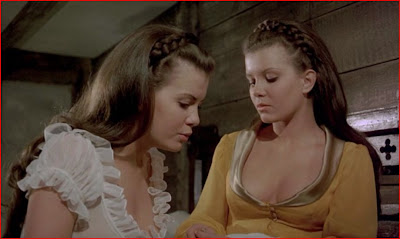 For most of the picture, the titular twins (played by pioneer twin Playmates Mary and Madelaine Collinson) take a back seat to a war of wills waged by witch-hunter Gustave Weil (Peter Cushing), the head of a torchbearing Brotherhood, and the decadent Count Karnstein (Damien Thomas). The Count routinely has his way with local women, doing who knows what in his castle, but the bourgeois Brotherhood can't touch him because, as an aristocrat, Karnstein enjoys the protection of the Holy Roman Emperor. The war of wills is a class war fueled by Weil's resentment of Karnstein's privileges -- and his sexual prowess, we can assume -- and Karnstein's libertine contempt for Weil's intolerant moralizing. In their first encounter, Karnstein looks more like a hero, since we've already grown suspicious that the Brotherhood is burning innocent women. We're inclined to think that Karnstein has Weil well pegged as the real villain of the piece. However, amid the witch-burning there's this nagging business of a vampire. Someone's in the woods biting necks. Who could that be? 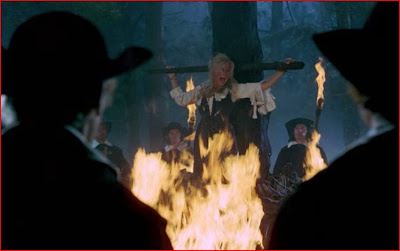 Both Gustave Veil (Peter Cushing, above) and Count Karnstein (Damien Thomas, seated below) have sins to answer for, but is that poor schmuck with the bite on his neck (bottom) one of them? 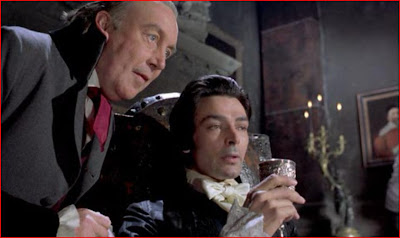 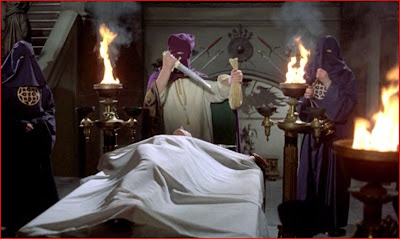 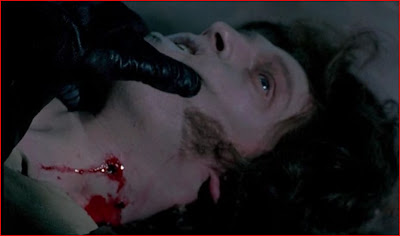 Count Karnstein, perhaps? The answer seems to be no, at least at first. We see the Count become a vampire by performing a blood sacrifice to summon the spirit of his ancestress Mircalla/Carmilla for a round of necro-incest prior to the necessary bite, but that begs the question of who was biting folks before. Wendigo thinks it a major weakness of the picture that this question is never really answered. We may be meant to assume that Karnsteins are running around all over the place, but since we see no other vampires before the Count summons Mircalla, we can't draw any conclusions about the early vampire attacks with any certainty. 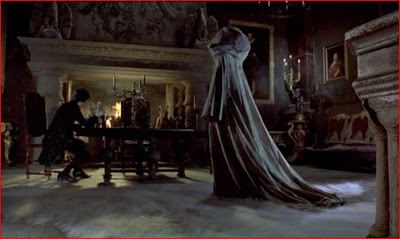 The Ghost of Vampires Past approaches Count Karnstein. Below, director John Hough makes the most of mirrors and mirror-related effects, including the Count's loss of his reflection as he becomes a vampire. 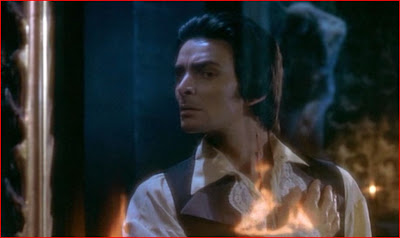 In any event, the battle between bourgeois morality and aristocratic depravity is played out in miniature between the newly-arrived Gellhorn twins. Maria (Mary) is the good girl, while Frieda (Madeline) is the wild child. Only Anton (David Warbeck), the choral instructor of the local Hammer Academy for Highly-Developed Young Ladies, senses the moral difference between the twins, and can thus tell them apart reliably when no one else can. Frieda resents the discipline imposed by Uncle Gustave and is attracted by the Count's decadent reputation. Maria isn't exactly happy with her uncle, but doesn't feel the same temptation to transgress out of spite that Frieda feels. Maria's too good for her own good. When Frieda runs off to spend a night with Karnstein and is turned into a vampire, Maria covers for her, convincing Gustave that she's Frieda and that Maria had run off for the night. For her trouble, Gustave beats "Frieda" with a belt and is sure to beat Maria in the morning to punish her. The real Frieda doesn't care. 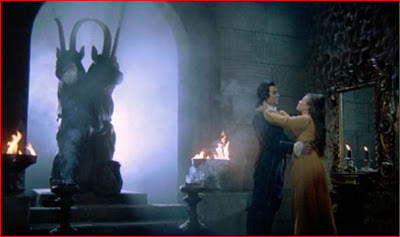 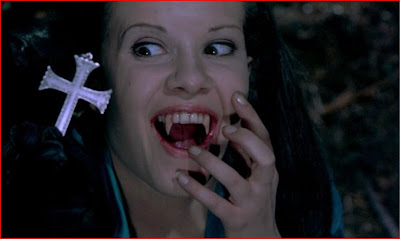 Anton has been studying vampire lore, and tries to explain to Gustave that the local problem is vampires rather than witches, and that burning suspects will do no good. You get a sense that, on some level, Anton is simply trying to discourage Gustave from burning women. But when his sister turns up dead by neckbite (and not necessarily by Karnstein or Frieda) he makes vampire fighting a serious vocation. Gustave gets wise when he catches Frieda in the act, but convinces the Brotherhood to behave themselves and hold the vampiress in prison for a time. That gives Karnstein time to kidnap Maria and do the switcheroo, so that Maria is brought to the brink of burning before Anton convinces Gustave to give her the crucifix test again. A now quite repentant Gustave rallies the Brotherhood to join Anton in an assault on Karnstein castle to destroy the aristocrat and his evil acolytes once and for all. Normally Peter Cushing vs. vampires has a foregone conclusion, but this time around he may have too much to answer for.... 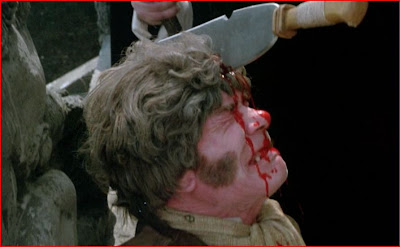 Twins may not have as much nudity as one might hope for, but the final reel has plenty of gore to keep up Hammer's street cred. 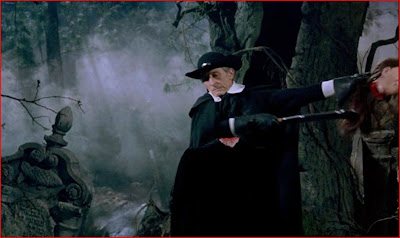 Wendigo acknowledges that Twins has a lot going for it. It has a strong male cast, Cushing, Damien Thomas and Peter Warbeck all giving good performances grounded in the film's social and cultural context. The film is admirably ambiguous in making Cushing a virtual villain motivated by obvious jealousies and resentments who only gradually evolves into an antihero. Count Karnstein also evolves, or devolves, from a mere libertine skeptic who initially scoffs at a purported sacrifice to Satan into someone who embraces absolute evil as almost an aristocratic imperative. He looks like he'll be the antihero at first in that early confrontation with Gustave, but his aristocratic prejudices seem to doom him to wickedness. Amid the confusion, Anton emerges as the least ambiguous hero -- though I initially suspected him of being the original vampire. Wendigo also likes the way the conflict between the twins echoes that of Weil and Karnstein, with the sisters taking opposite extremes of fatal selfishness and almost-fatal selflessness. After stumbling with the first sequel, scripter Tudor Gates, who worked on all three Karnsteins, was really back on his game this time. Technically, Twins is a knockout, richly envisioned by Hough and usually realized evocatively by cinematographer Dick Bush and art director Roy Stannard. Interiors and exteriors are often quite striking, and Twins overall looks richer and more striking (whatever the difference in budget) than Vampire Lovers. 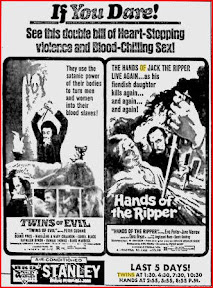 Wendigo wants to stress again how irritated he was by the film's failure to identify the original vampire. For him it's a major, almost crippling flaw of the story. If anything, the whole vampire angle is a weakness of this ostensible vampire movie. That's because he feels that both Frieda and Count Karnstein became less interesting once they became conventional vampire villains. He also feels that Hough bungles one major scene, the bedroom tussle between Anton and Frieda disguised as Maria. Shot with a handheld camera and a fisheye lens, it was probably meant to express immediacy, but in Wendigo's opinion it only looked amateurish and made Madelaine Collinson -- in her one nude scene -- look silly. Meanwhile, the business with Joachim, Karnstein's mute black servant, having to pantomime that the Brotherhood is advancing on the castle, looks goofy to say the least if not a little racist. Joachim gets his own back later with an impressive cleaver-to-the-head attack on a Brother. Finally, Harry Robinson's music is probably inappropriate in its own right, sounding more like a swashbuckler soundtrack, but his main theme now sounds alarming like the opening music for the Justice League cartoon series of a few years back. That's not Robinson's fault, but anyone who "recognizes" the music may have a hard time taking the film as seriously as it deserves.

While I've stated my preference for Twins over Lovers, Wendigo is reluctant to name a favorite of the two. The original film retains the overwhelming asset of Ingrid Pitt, while the stunt-cast Collinsons don't impress him as actors. Also, like Lust, Twins is almost lesbian-free, which is simply wrong, in Wendigo's opinion, for material derived from Carmilla. It also has less nudity in general, a fact that surprised and disappointed Wendigo somewhat. While this makes it look like he leans toward Lovers, he feels that the comparison is like apples vs. oranges. I'll accept that because Twins really took the Karnstein concept in a new direction and practically into a new genre. What keeps them together in a trilogy, beside the Karnstein name, is a concern with vampirism as an analog for sexual deviance, whether Lovers' obvious lesbianism or Twins' implicit libertinage. In the end, Wendigo likes both films for different reasons, flaws and all. Throw out the middle film and you have an admirable diptych of late Hammer nearly at its best.

Here's a British trailer uploaded to YouTube by flotzcore.

Posted by Samuel Wilson at 8:18 PM

I like Twins more with each viewing. Lust for a Vampire unfortunately doesn't improve with further viewings.

TWINS is a big favorite of mine as well. This is coming out next from Synapse. They just released VAMPIRE CIRCUS on both DVD and Blu Ray if I'm not mistaken.

Odd that Damien Tomas didn't go on to a much bigger career. He's in SINBAD & THE EYE OF THE TIGER, but gets no dialog that I recall and he's in SHOGUN, too.

d., I don't believe I've seen Lust, but I'll take your and Wendigo's word for its badness.

venom5, we'll be watching Circus as a Netflix stream shortly but I'm sure Wendigo would look forward to a DVD with proper extras for both that and Twins. I remember Thomas very well from Shogun but from little else apart from Twins. He should have gone further.

the collinson twins
have been my favorite stars of Hammer films.