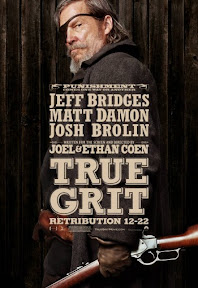 The most famous moment in Henry Hathaway's 1969 film version of the Charles Portis novel True Grit is one of those moments of cultural transgression that could only take place at that time. In his Oscar-winning portrayal of Rooster Cogburn, John Wayne declares his intention to kill or capture the Ned Pepper gang. As Pepper, Robert Duvall says those are big words coming from "a one-eyed fat man." Wayne, the self-conscious symbol of traditional American manly conduct and right living, replies: "Fill your hand, you son of a bitch!" Those are Charles Portis's words, presumably. Jeff Bridges says them in the Coen Bros.' new version of the story, but the effect cannot be the same. So what if he cusses? It isn't like he's never done it before.

The moment doesn't seem different enough to justify re-doing it; yet the scene has to be there. It isn't meant to be the biggest moment in the new movie, anyway. The Hathaway film was an event in the career in John Wayne, a movie made to win him the Oscar. Bridges has his already, finally, and has nothing to prove here except that, on this occasion, he can fill Wayne's big boots. On this occasion, he certainly can, but the Coen film isn't about him the same way the Hathaway is about Wayne. The Coens' Cogburn is less hero, though hero he is, than a classical curmudgeon; in some mad alternate universe, I could imagine W. C. Fields playing the role and having a blast insulting the stuck-up Texas Ranger played previously by Glen Campbell and now by Matt Damon. Some of my favorite parts of the new film are the dialogues of Bridges and Damon, which dig up details about the characters neglected in the original film, if I recall right. Of the main actors, Damon impressed me the most, unrecognizable as he nearly was with his moustache and hat. He's clearly the biggest improvement on his predecessor. Bridges sometimes seems sealed within his alienating accent, though his work grows on you, while the infant phenomenon Hailee Steinfeld actually seems a bit mechanical in her admirable but uninflected doggedness as Mattie Ross. There's a certain strangeness in Kim Darby's performance, however overaged she was, that I missed from the new girl. Whether Steinfeld's interpretation is more authentic I can't say. She grew on me, too, but I think she's being overrated just a little. As her enemy Tom Chaney, Josh Brolin is underused, but considering what we see of him, that might have been for the best. The normally reliable actor blusters a bit too much in the little time he has, and the part is really beneath him -- though those who saw Jonah Hex may think differently.

Meanwhile, I notice some disappointment that True Grit hasn't panned out as a Coen Bros. statement on the Western, or even a satire on the genre. Had they wanted to make a statement, I suspect, they would have written an original story. Nevertheless, they have their fun. I'm not the first to suspect that the Coens are biting a hand that fed them a bit, the hand being Cormac McCarthy's and the movie seeming sometimes like an affectionate parody of the No Country for Old Men novelist's Blood Meridian mode. I might be the first to call them out on an elaborate in-joke at the expense of executive producer Steven Spielberg and Saving Private Ryan as Matt Damon (Pvt. Ryan himself) utters a prayer while drawing a bead on Barry Pepper (quite good as Ned Pepper, by the way), who played the prayerful sharpshooter in the Spielberg film. At the same time, whether the effect was intended or not, I found myself reminded of Unforgiven often. Seeing True Grit redone may simply have made the novel's influence on the Eastwood film, or the latter's grimly satiric echoes of the former, more apparent for me. The Coens have made a playful film, albeit with a sting at the end for those who know True Grit only by the first movie. I enjoyed its eccentricities most, from the mock-formal dialogue to the weird sequence of events involving a corpse hanging from a tall tree branch. Maybe the most playful thing is Carter Burwell's prominent inclusion of a hymn in the soundtrack that has all the movie buffs babbling about The Night of the Hunter. I suspect it's just the Coens jerking the critics' chains, though I wonder whether Burwell was parodying the Ken Burns style soundtrack on purpose at points or simply came too close to the TV documentary mode for comfort.

If the new film is a statement about anything, it's a confirmation of the durability of Portis's novel. While I found myself wondering at times whether there was much point to remaking True Grit, I realized finally that the point was to give another generation of actors an opportunity to do roles that should prove perennial. Jeff Bridges proves that Rooster Cogburn is a great character and a great role, not just a symbol for one actor for all time. There's no reason why someone forty years from now shouldn't let Rooster strut his stuff yet again, if a director has an actor to fill the character's boots. The Coen Bros. have not so much supplanted Henry Hathaway as they've restored Charles Portis's True Grit as a text that stands apart from any single movie translation. It may be a modest achievement, but it's still a good deed.
Posted by Samuel Wilson at 4:06 PM

This is Nathanael from Forgotten Classics of Yesteryear. You asked what I thought of "True Grit." Well...here it is:

I thought that it was good. Very good, in fact. Do I like it better than the original? I can't quite say.

Don't get me wrong, Bridges was great. But he overplayed himself. I liked the analogy to W. C. Fields, because it felt like Bridges largely played his role for laughs. He was drunk off his ass, quite literally, for most of the film, all the while chewing more scenery than tobacco. He struck me as a rugged, mountain man...but not as a U.S. Marshall. He didn't come off as a guy who could take on four men with two loaded six-shooters. He came off as a well-meaning clown.

Also, I prefer the cinematography from the original film. The Coen Brothers use of rural Texas was striking...but after a while the washed out color palette largely dominated by browns and beiges became tedious. The original was filmed largely in the forests of Colorado, where Hathaway submerged the camera in luscious greens and blues in addition to the traditional browns and blacks which inevitably accompany every Western. The Coen Brother's film was too desaturated for its own good. I know that desaturated photography focusing on browns is a trademark in the Coen Brother's films (with "Barton Fink," "No Country for Old Men," and "A Simple Man" coming to mind). But I felt that this film could have used a bit more...well...color.

Other than that, the film is thoroughly entertaining with an incredible cast. You know...I wouldn't be surprised if Matt Damon had a second Oscar nomination heading his way after this performance.