THE GIRL WITH THE PISTOL (La ragazza con la pistola, 1968) 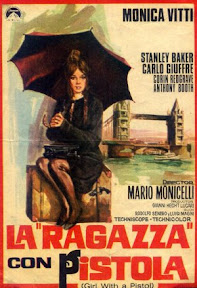 Swinging London loomed large in the Italian imagination in the 1960s, drawing directors to work there and inspiring movies set there. There was a kind of Anglo-Italian synthesis at work in those days, we might say, the highest expression of which was Michelangelo Antonioni's Blow-Up. While that's a British film directed by an Italian, the late Mario Monicelli -- who committed suicide last week at the age of 95 -- went to Britain to make an Italian film about a Britain of the Italian imagination. He brought along an actress, Monica Vitti, identified with her work for Antonioni, who had already worked in Britain in the title role of Modesty Blaise. For Monicelli, Vitti was neither an icon of alienation nor some Anglo superwoman. Instead, in a comic performance that earned her a David di Donatello award as Italy's Best Actress of the year, she plays a traditional Sicilian woman for whom Britain becomes a land of personal liberation.

Vitti plays Assunta Patane, who lives with her sisters in traditional social segregation from the men of her town, dancing with the girls indoors while the men dance with each other outdoors. The sexes don't mix, presumably, unless a marriage is arranged. Alternative arrangements are possible, as demonstrated when Assunta is kidnapped by the stooges of Vincenzo Maccaluso (Carlo Giuffre) and taken to his lair. The stooges have grabbed the wrong girl, however; Vincenzo wanted Assunta's cousin. Still, any port in a storm. The virtuous girl resists, but is overcome by Vincenzo's smarmy charm. In Sicily, this means Vincenzo has to marry her, but he's the love 'em and leave 'em type, and in the morning he's gone.

Now Assunta bears a shame that blights her entire family. It can only be eradicated by taking revenge of Vincenzo, but that's a man's work and there's no men in the Patane family -- and her boyfriend thinks it's none of his business. There's no choice but for poor Assunta to pack her pistol and follow Vincenzo's trail to Scotland, where he works as a cook in an Italian restaurant. Here begins a picturesque picaresque chase across the United Kingdom as Vincenzo repeatedly dodges Assunta's wavering wrath and she encounters a variety of British types along the way. Gradually, as she must provide for herself to continue her pursuit, she acquires skills, or exploits the gift of her good looks, to become self-reliant. When she temporarily believes that Vincenzo has died, though not by her hand, her situation seems hopeless because she can't go home to Sicily until she's taken revenge. With no choice but to make a lasting life for herself in Britain, she is unbound from tradition, so that when the opportunity finally arises to avenge herself on the still-living Vincenzo, revenge takes another, sweeter and symmetrical form. 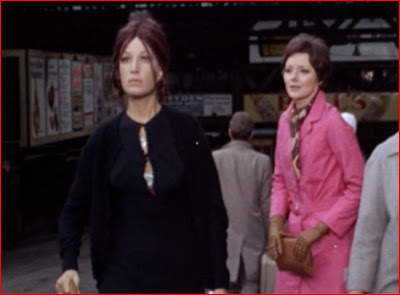 An innocent abroad with a mission of murder. Monica Vitti is La Ragazza con la Pistola.

I knew I was taking my chance with a comedy, but I'd wanted to see more of Monicelli's work since I'd been bowled over by his long-suppressed contribution to the big-budget anthology film Boccaccio 70. The Girl With the Pistol is available as a Netflix streaming video, but what you'll see is an English dub (with some large chunks of untranslated Italian left in) in fullscreen format, possibly with parts cut out. Since Monicelli had proven himself a fine widescreen stylist in Boccaccio, the compromised format disappointed me from the start. Even so, it was clear that Monicelli and cinematographer Carlo di Palma were inspired by British landscapes and cityscapes to get some nice location footage from all over the country. The comedy worried me more, though. The initial kidnapping and seduction were crude slapstick, and in Britain the fish-out-of-water gags threatened to tire me early. Monicelli and his writers even stoop to wringing humor from a man in a kilt; Assunta, who must greet him as a maid at a party, can't stop laughing at him and his "dress" and must hide in the kitchen until the phone rings unexpectedly for her. Also dubiously humorous is a sequence when she decides to marry a man (Corin Redgrave) who survived a suicide attempt over a failed romance, only to be shown by a sympathetic doctor (Stanley Baker) that the failed romance had been with another man. He shows her this by taking her to a gay bar so they can both do double takes at the deviants surrounding them. There is a funny payoff, however. Feeling flush over this scandalous discovery, Assunta grabs an ice cube from a tray at the bar and rubs it across her face and neck to cool down. She then tries to put the cube back where she found it, only to have the tray drawn away sharply by a fastidious bartender. 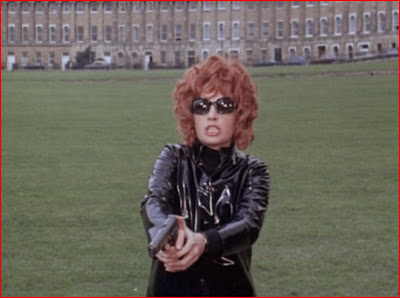 Above, truth in advertising: Monica Vitti with a pistol. Below, Stanley Baker as the Doctor with the Pistol. 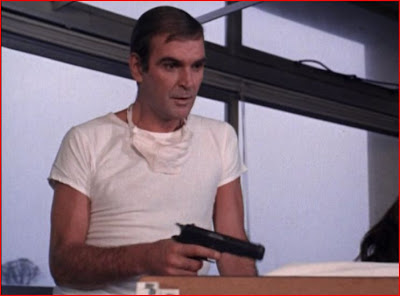 The film finds surer ground as it satirizes Assunta's own inconsistent attitudes. There's a funny bit when she's agreed, despite her scruples against staying overnight with men, to accept the platonic hospitality of a friendly rugby player. He spends the night watching rugby on TV, which somehow disgusts Assunta. Here you have a woman in the house and you'd rather watch sports on TV? she asks. Rugby guy takes this as an invitation, only to incur the wrath of freshly offended Assunta in an apartment-wrecking tantrum. The scene sends up Assunta's primitive Sicilian sexism; she expects men to be beasts and grows confused when British manhood proves unbeastly. Are they unmanly, too? 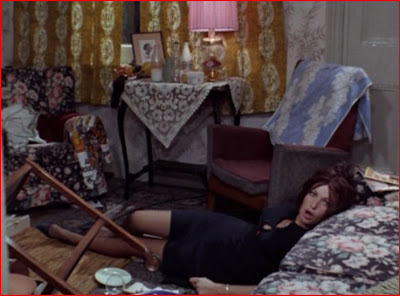 It takes her a while to outgrow her home assumptions. She gets a crush on Baker's doctor and is thrilled to learn he's getting a divorce. But then she's baffled when the amicably separated couple invite her to join them and the ex-wife's new boyfriend for a trip to the zoo. Shouldn't they all want to kill each other? The more she comes to appreciate the more liberal British attitude, the quicker she loses her murderous feelings toward Vincenzo. The film even teases a reconciliation between the two, or at least a painful choice for Assunta between Vincenzo and the doctor, before her true, gently comic vengeance is finally revealed. Against the odds, Monica Vitti's sweeping character arc holds the film together as she matures from frightened avenger and ignorant outsider to successful model in more than one sense of the word. Assunta is never unattractive, but her transformation from black-clad ponytailed harridan to colorful glamor girl has an ugly-duckling-into-swan quality just the same. 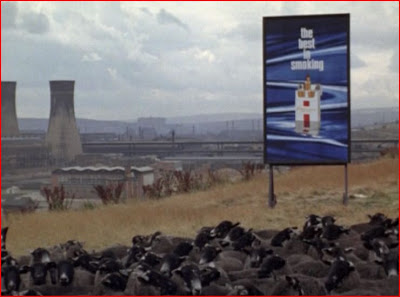 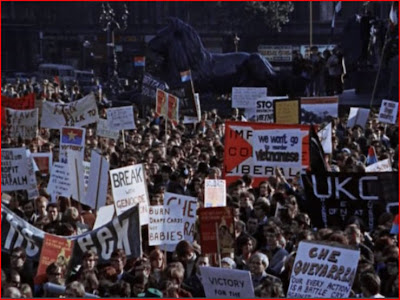 Monicelli's Britain is no paradise or fantasyland -- he catches its industrial drabness and finds a sight gag in the proximity of a cigarette ad to a nuclear power plant -- but it has the same power to transform visitors that Americans sometimes attribute to exotic lands. Assunta's transformation may have blossomed into a political awakening as well, but there seems to be a scene missing that would explain how she ends up brandishing a sign at an anti-war demonstration. Maybe Monicelli saw it as an automatic part of her evolution and embrace of freedom. If she ends up part of commercial culture, boasting when she sees her legs on a giant Antonionian billboard, that's still a form of liberation from the tyranny of custom she envisions repeatedly as a bad Greek tragedy with Vincenzo dodging bullets in a kilt. La Ragazza con la Pistola never becomes a great comedy, but it manages finally to be mildly amusing once Vitti wins you over, and it has historical interest for its portrayal of Britain in the Italian mind at a moment of radical cultural ferment in both countries. 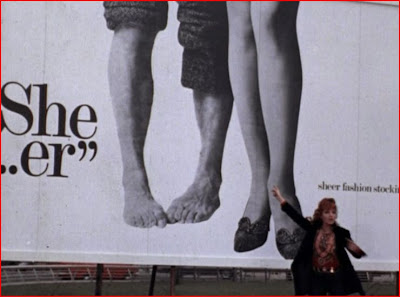 "It's me!...The one on the left!...My left!..."
In lieu of a trailer, take a listen to the Girl with the Pistol theme song, "Girl with a Gun!" by Peppino de Luca, over the closing credits, as uploaded to YouTube by ChoffDiscotheque.
Posted by Samuel Wilson at 9:56 PM