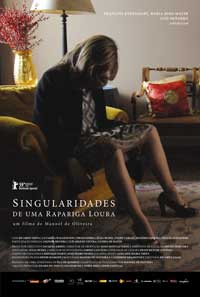 When a centenarian sets himself to writing and directing a feature film, you should probably cut him some slack. Manoel de Oliveira's updating of a story by Portuguese literary lion Jose Maria de Eca de Queiroz runs only 63 minutes, and that's with several digressions. But Oliveira, who's been making movies since the 1930s, is a man in a hurry. By the time I saw this film, he'd already released another feature (previewed on the Cinema Guild DVD, The Strange Case of Angelica looks quite promising), and IMDB reports that the 102 year old director (his birthday was Saturday) has yet another in pre-production. He also batted out a short subject, in which the characters of a Renaissance painting comment on its symbolism and relevance, earlier this year. So if 63 minutes seems short for a feature -- as it's been for the last sixty years or so -- Oliveira's entitled to some indulgence, if not to a bit of awe. Not many people have made films in their nineties -- Clint Eastwood may get there if he stays healthy and interested -- but Oliveira sets records every time he calls action on the set.

To what purpose, however? By now, Oliveira is a celebrity of global cinema by virtue of his age, but are his recent films any good? I can't say, except to note that I've seen and liked I'm Going Home, from back when the director was a mere nonagenarian. This is the first Oliveira I've seen since then, thanks to the Albany Public Library -- though you can also see it on a Netflix stream. It has some interesting visuals, but in its brevity it seems simply to stop rather than end properly.

It's the story of Macario, a department store clerk who grows infatuated with the titular blond. She lives next door to him, and he can see her looking out her window and waving her Chinese fan from his computer desk. Bit by bit he finds out more about her, though he ignores an important warning sign when she shoplifts 150 euros worth of goods from his store, where his uncle is the owner and his boss. That news seems strange, since Luisa moves in exalted social and cultural circles where Macario is but an interloper. Conscious of his poverty, he impoverishes himself further by quitting his job, but resolves to make good on some venture in Cape Verde in order to earn Luisa's love. His fortunes rise, fall, and rise again, but the importance of wealth and the worth of Luisa are thrown into doubt when her shoplifiting compulsion overcomes her at the jewelry store while Macario is shopping for her wedding ring. 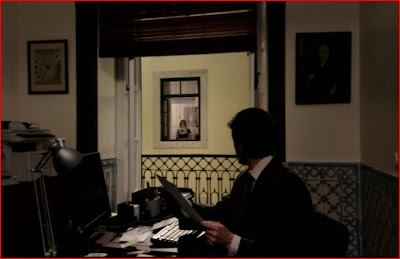 Macario (Ricardo Trepa) notices the blonde across the way (above) and sneaks a closer look (below). 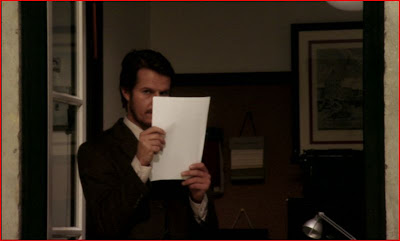 The story betrays its 19th century origins and its emphasis on a young man striving for social recognition by the moneyed elite, though Oliveira updates it with comments on the precarious state of the present-day Portuguese economy. There's a whiff of satire in Macario and Luisa's adventures in a high culture in which neither seems greatly interested. Macario gets to meet her at a swanky literary salon where harp solos and socially-conscious poetry recitals are featured, but the young lovers prove more interested first in each other, and then in a card game away from the cultural events. Their objectification of each other is highlighted by the set design, in which their apartment windows are made to look like picture frames on gallery walls. Oliveira plays with framing throughout the picture, making the most of windows and mirrors in shots that show his attention to composition in depth. In the gambling-table scene, a man reading poetry in the salon can be seen deep in the background, as if an ignored picture, while the lovers hover over the game. Whatever you make of his narrative skills, Oliveira still has an intelligent pictorial sense that may look deceptively modest in its lack of flash or flourish. Even the framing sequence shots of Macario narrating his story to a fellow passenger on a train are handsomely arranged to make the hurtling landscape a lively backdrop for the seated pair. This is the sort of picture where you have to watch carefully for subtleties of expression or gesture during long takes that may or may not be typical of very elderly directors. 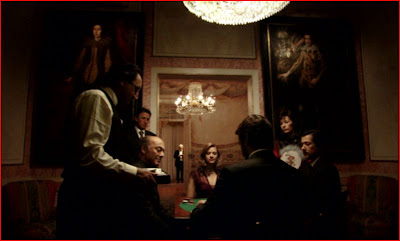 Composition in depth: Luisa (Catarina Wallenstein) sits down to cards as a figure in the background declaims the poetry of Fernando Pessoa.

Eccentricities is a film without real closure or a "why." If you want an explanation of Luisa's kleptomania, don't hold your breath. Whether Eca de Queiros thought it required explanation or not, I can't say, and it's enough for Oliveira to show that it ultimately disillusions Macario. Let's say he doesn't offer the closure an American audience would probably expect, but the type of film Oliveira makes may not require it. We might also question the point of the flashback format, but many 19th century stories are written in that indirect fashion, as stories of characters telling stories. Oliveira isn't quite a living link to the 19th century, but he appears dedicated to sustaining a cultural continuity linking the 19th to the 21st. Above all, Eccentricities of a Blonde Haired Girl impresses me as a rigorously civilized film by a director who's probably quite conscious of his place in history in several senses of the term. I recommend it as a curiosity above all, or a kind of tribute to human potential, but some people may make more of it than that.
Posted by Samuel Wilson at 10:36 PM

This was really fascinating. I'd never heard of the guy before - how totally amazing to have made films in the thirties and still be making them now. I have a lot of catching up to do.
Thanks for introducing me to this!