For someone dedicated to exploring the wild world of cinema I've been shamefully neglectful of the work of Ingmar Bergman. Maybe I've never thought him wild enough. I think of the Swedish writer-director as a cinematic chamber artist when my ideal of cinema is spectacle. His concerns often didn't strike me as necessarily cinematic, and indeed, Bergman seemed to do just as well on television and the stage. I freely admit to speaking from ignorance here, but these were my impressions of Bergman based on his reputation as an austere student of human psychology. Since starting this blog two years ago, I've occasionally promised to get around to Bergman, but only now, with Criterion's release of Ansiktet, have I taken the plunge.

I remember having plenty of opportunities to see The Magician on TV back in the early days of cable. It seemed to be on pretty frequently on one of the arts-and-entertainment channels (though not necessarily the lamented A&E itself) that proliferated in the innocent Eighties, but I never felt motivated to give it a look back then. A sense of regret helped compel me to summon the DVD fron Netflix, but I was also inspired by what Tino Balio had written about Bergman in The Foreign Film Renaissance on American Screens, 1946-1975. Balio devotes an entire chapter to Janus Film's brilliant marketing of Bergman in the late 1950s, which climaxed in 1959, when five of the director's films, including Ansiktet, were playing in New York art houses and the Bergman "brand" had been identified with cutting-edge cinema. Balio sees the Janus buildup as a high-toned alternative to the exploitative ballyhoo with which, like many European films, Bergman's earlier work had been promoted in the U.S. Yet the superior sexual frankness of European film remained a strong part of its appeal throughout the "renaissance," and it remained an exploitable element of Bergman's work. The affinity between art and exploitation on the common ground of "frankness" is best illustrated by the well-known influence Bergman's Virgin Spring had on the creation of Wes Craven's Last House on the Left, but Ansiktet has a bit of exploitation flavor as well. Janus helped things along by calling it The Magician rather than translating the title literally as The Face. While Bergman's title is more meaningful once you see the movie, The Magician doesn't exactly do the film a disservice.

Somewhere in Sweden in 1846, Vogler's Magnetic Health Theater arrives in town. On the way the troupe has found an alky actor dying of exposure by the side of the road. Satisfied that he's expired, Vogler and Co. move on. They have to apply for a permit to perform in the community. To win it, they must give a command performance for the local notables: the consul and his wife, the chief of police and his wife, and Dr. Vergerus. Among the elite, skepticism seems to prevail. Chief Starbeck seems inclined to dismiss the mute Vogler (Max Von Sydow) as a crank, while the empiricist Vergerus wants to see the performance and draw his own conclusions. The consul's wife is haunted by the recent loss of a child and has greater hope for Vogler's supernatural powers. "You're here to explain why my child died," she confides in the Christ-like magician. 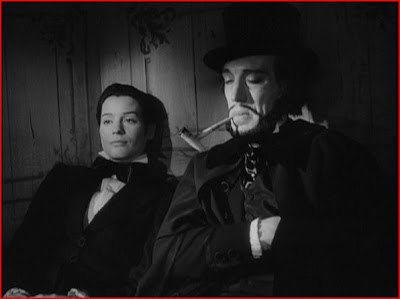 The Magician (Max von Sydow, right, with "apprentice" Ingrid Thulin) and the Skeptics (below) 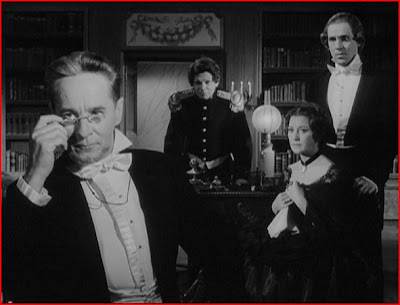 The troupe is allowed to stay overnight at the consul's residence before the command performance, but they must dine and board with the servants. And can you blame the consul? Vogler's is a motley bunch: the weirdly intense mute himself; his apprentice "Mr. Aman" (Ingrid Thulin is fooling no one); the mountebank mouthpiece Tubal; Granny Vogler the herbalist and potions dealer; and their coachman Simson. 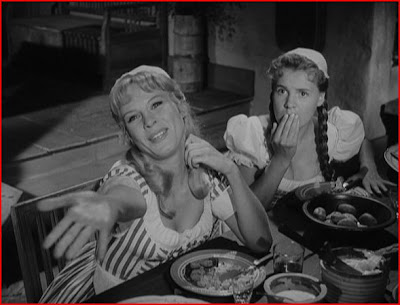 "Read my palm!" Bibi Andersson demands. It's definitely worth a closer look.
The servants prove a more credulous, appreciative audience, especially the maid Sara (Bibi Andersson) who falls almost instantly for Simson. Some of the servants come in for a scare when an all-too-real apparition invades the estate. It's the old actor from the road, who has failed to die and still craves drink. Though he's not dead yet, he boasts to Vogler that he's already better as a ghost than he was as an actor. When he finally passes out again, Vogler puts him in a box, as if for future reference. 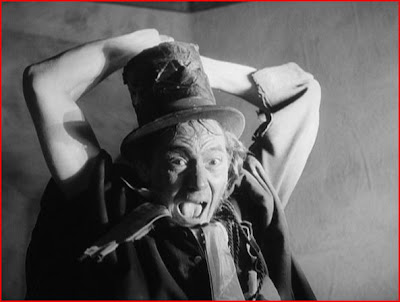 Bengt Ekerot played Death in Bergman's Seventh Seal. In Ansiktet he plays Death Warmed Over.
Later in the evening, Vergerus finds Aman, a.k.a. Manda, out of costume in her true identity as Mrs. Vogler. She admits that Vogler can talk and is a fugitive, and Vergerus makes a vague proposition to her while noticing Vogler in the doorway. The magician throws the doctor out, tears off his fake hair and beard and utters his first words of the film, "I hate them!" 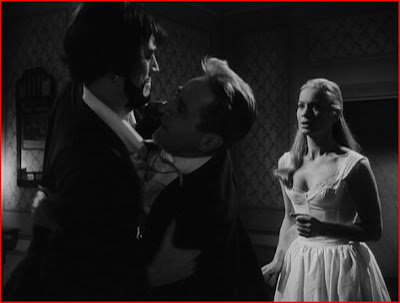 The next day's performance starts badly when the wirework behind Vogler's levitation trick is revealed behind a curtain. Tubal assures the audience that all the obvious trickery was done on purpose, as a joke to preface displays of Vogler's real power. The magician is a student of Mesmer's principles of animal magnetism, which he demonstrates by mesmerizing Chief Starbeck's wife, who promptly tells embarrassing tales about her husband but claims to remember nothing afterward. For his next trick, Vogler will bind the consul's thuggish coachman in the "Invisible Chains," applied in pantomime by Aman. The coachman sells it like a madman, thrashing about in an increasingly desperate effort to free himself. Finally he falls on Vogler and throttles him before bolting out of the room. Vogler is declared dead, but the skeptical Vergerus decides to perform an immediate autopsy on the magician, though his objectivity is shaken when he finds himself locked in an attic with a "corpse" whose behavior proves unpredictable.... 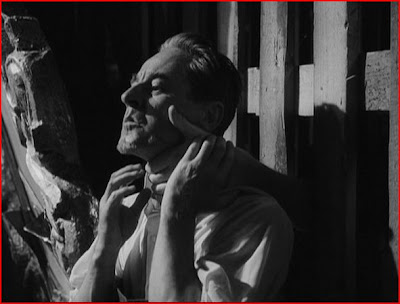 Ansiktet finds Bergman working in the same mode as in his most famous movie, The Seventh Seal. The characters are types and archetypes, and they exist so Bergman can make points about high and low class, science and superstition. This isn't the sort of intense psychological study that the Swedish director became known for in his creative maturity. Instead, The Magician is a classical spookshow that wouldn't necessarily look out of place in Val Lewton's roster of RKO horror programmers. It has crisp, eerie black and white cinematography by Gunnar Fischer that really rises to the occasion when Bergman wants to scare us but also impresses on location as the Vogler coach rolls through the forest.

In The Magician Bergman explores a continuum of skepticism, superstition and cynicism. Granny Vogler unashamedly exploits the credulity of simple folk. Temporarily short on love potion, she tells Tubal to give a customer a bunion cure, since "what matters is how the bottle looks and how the potion tastes." On at least one level she's right; appearances help make the sale. But belief in the power of love potions also seems to prove their power, though that may only mean that the desire for a love potion proves that love already exists. Magic is only our attempt to make tangible those things that really do haunt us, like the dead child of the consul's wife, or those powers that seem to make us fall in love. Faith in magic can make it real despite the mercenary cynicism of those who'd exploit that faith. Skepticism, meanwhile, isn't invulnerable. Vergerus should have reason to expect that Vogler is trying to fake him out in some way. He should probably expect the supposed corpse to come to life if he assumes Vogler is faking. But he feels fear anyway, because he knows Vogler is an enemy who has already been violent with him. That fear may give Vogler a real power over the skeptic. That power might not be magic, but it's still something real. Magic (or "animal magnetism") is just a label that mystifies reality. 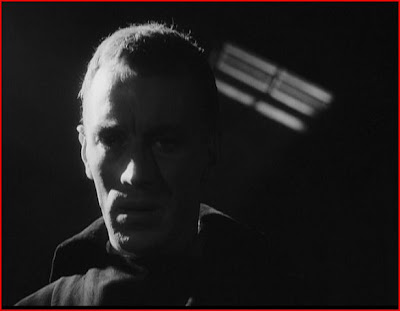 The Swedish title refers to the false face that Vogler wears, one that obviously inspired George Stevens to cast von Sydow as Jesus in The Greatest Story Ever Told. Stevens was on to something, since I'm sure Bergman meant Vogler's marks to be inspired or awed by the magician's Christlike visage and his somewhat otherworldly manner. Max's own clean-shaven, close-cropped mug is shocking by comparison in its plainness, a blank to be filled in by his own imposture just as people invest the stage figure of Vogler with their dreams and fears of supernatural power. There's something abject in his blankness, and once the show is finally, truly over he comes across as a pathetic beggar, even as he's appeared to demonstrate real power. But was it his power or was it all in the minds of his audience, believers and antagonists alike? That's a question that Bergman doesn't need to answer; it's yours to take home with you.

Ansiktet is the sort of story that requires people in close quarters to fall in love or feel strong emotions; it's a fable with a point to make. In that sense it's too neat, too blatant by certain standards, but there are definitely times and places for such stories. With its genre trappings and melodramatic story, The Magician might make a good starter Bergman for the curious, though I don't know how much it prepares you for his major works of the Sixties and Seventies. On its own terms it's pretty entertaining and proves Bergman as much a showman as an artist. He has a forbidding reputation, but Ansiktet is quite accessible and even a little hokey. Genre fans will leave it believing, if only for a moment, that Bergman was one of us after all.
Posted by Samuel Wilson at 9:38 PM

This film was a decent addition to Bergman's repertoire.

If you REALLY want to get into Bergman, start with either:

Those are the best films with which you can get acquainted with his work.