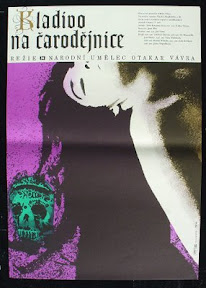 In 1968 the Soviet Union put an abrupt end to the "Prague Spring" of Communist-ordained cultural and political liberalization in Czechoslovakia. That should have meant as abrupt an end to the "Czech New Wave" of exportable arthouse cinema, but the blossoming of the nation's film industry predated and for a time survived the political reforms characterized as "Communism with a human face." Otakar Vavra, who turns 100 next February, isn't considered a "new wave" director. A director since the 1930s, he actually taught many new-wave talents, most notably future Oscar-winner Milos Forman. He worked steadily through the Nazi occupation and the years of subjection to the Warsaw Pact -- a matter of luck or proof of an aptitude for accommodation. The mere existence of his Kladivo na carodejnice, and its appearance in the aftermath of the Soviet crackdown, is amazing. It's not the sort of film you'd expect a hardline Communist regime to allow in theaters, though there may be a difference between the way we see its subject matter and the way a Czech Communist would.

The Witches' Hammer (also known as Witchhhammer) takes its title from the Malleus Maleficarum, the infamous guidebook for witch-hunters, and takes its story from true events in the Habsburg Empire nearly contemporaneous with the Salem witch craze. The trouble begins when an old woman is caught stealing a consecrated host during Communion -- she takes it in her mouth without swallowing. Chided by church authorities, she admits that she intended to give it to a neighbor woman to feed to her cow, which had grown dry. The power of the host should restore the flow of milk, after all, and in return the crone would get a quart of peas. In the eyes of the authorities, superstitions like these are sinful, but where there's smoke there may be hellfire. 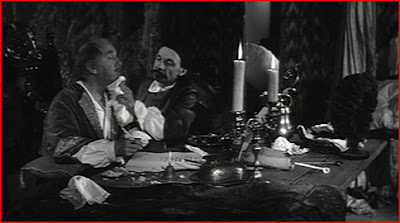 You can't expect a witch hunter to do his research and feed himself, much less wipe his mouth, all at the same time, can you?

The local countess calls for a witch hunter, and gets Boblig (Vladimir Smeral) who makes his terms clear immediately. Witch hunting is extensive and expensive work, he explains, and he'll need a staff and stipends appropriate to the scale of the work. For Boblig, it's a pure racket; he intends to milk the territory for all he can and live high on the hog all the while. No fanatic ascetic, he enjoys the attentions of a faithful stooge who feeds him while he reads and massages his tootsies when they're tired. To keep himself in business, he resorts to the usual business methods, torturing helpless old women into denouncing others and intimidating others with hints that they're soft on Satan. But the first public burning convinces Deacon Lautner (Elo Romancik) that innocent people have been killed and provokes a power struggle with the witch hunter. 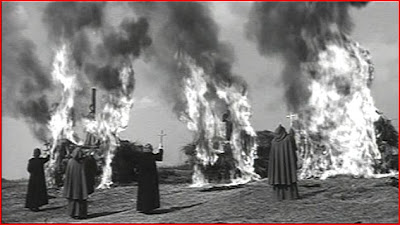 Above, an act of faith. Below, doubt. 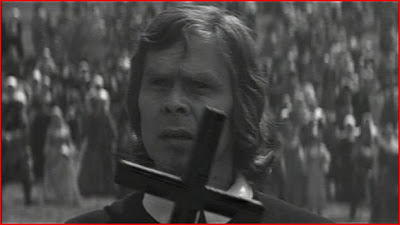 Apart from being filmed in stark monochrome, Kladivo has much in common with an international subgenre of witch-hunter films from the late 1960s and early 1970s. Boblig is a Moravian counterpart to Matthew Hopkins, the Witchfinder General of Michael Reeves's cult film, while Lautner is a peer of Urban Grandier, the French priestly hero of Aldous Huxley's book and Ken Russell's film The Devils (of Loudon). For Americans, the witch-craze subject is an instant reminder of Arthur Miller's The Crucible, and Americans' interpretation of that play probably influenced my expectation of how Czechs would have interpreted The Witches' Hammer. There was never any question that Miller intended his play as an allegory of McCarthyism (though he managed, while adapting it into a 1990s screenplay, to make it relevant to modern molestation hysteria). The Crucible conditioned Americans to equate historical witch-hunting with the metaphorical witch hunts that had Commies for quarry. If anything, it's easier to equate witch hunts with the purges and terrors perpetrated by Leninist regimes throughout the 20th century. On that assumption, we might expect Czech audiences with fresh memories of Soviet repression, not to mention Czech censors and Soviet supervisors, to equate Czech witch hunting with its modern Communist equivalent. To western eyes, scenes like the one where condemned victims are prodded to thank the authorities for sentencing them to death practically beg for the sort of anti-totalitarian reading that we'd expect the totalitarians themselves to pick up on and nip in the bud. 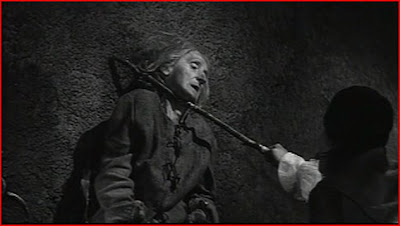 A typical victim is trained to recite her confession correctly.
Well, didn't they? I don't know how extensive a release Kladivo got in its homeland, but it seems like the sort of film that shouldn't have been released at all. Perhaps the authorities assumed that different conclusions would be drawn by Czechs than Americans would draw. Vavra himself attempts to impose a specific anticlerical context on the story by cutting back repeatedly to the misogynist ranting of an anonymous hooded fanatic, while the picture closes with a confession that the church has failed mankind by failing to stop Boblig's spree. An anticlerical interpretation of a witch-hunt film is probably the natural one, after all, since repressive, ignorant clergy were the people directly to blame for the suffering of innocents. Audiences might not seek out symbolism or allegory from such a story, especially if they're like the audiences for some of the other witch-hunt films of the time, e.g. Mark of the Devil, that were primitive forms of torture porn. 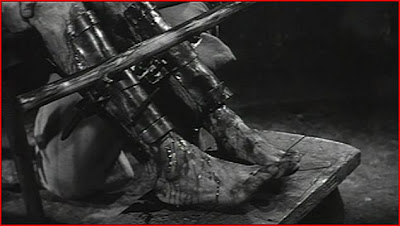 Despite its origin in a Communist country and its proximity to art-house trends, The Witches' Hammer gives off a strong exploitation vibe. That vibe is never stronger than in its opening sequence, when the fanatic narrator's first misogynist rant is illustrated by scenes from a women's bath house full of nakedly bathing women. We'll have more nudity later -- one woman is stripped and inspected for a mark of the devil -- but the film's main focus is torture. 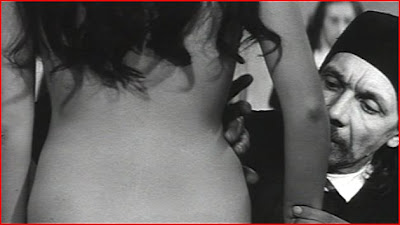 Thumbscrews are liberally applied and feet are cruelly booted. Where Vavra differs from more thoroughly exploitative directors, however, is his refusal to fetishize torture. The typical victim of torture in his film, for instance, is a haggard old woman rather than a nubile, heavy-breathing wench. There's no catering to sadistic fantasies; only a grim, unrelenting exhibition of cruelty, with no payback or comeuppance for the witch hunter at the end. The horror of it is the apparent impossibility of justice and the helplessness of anyone, even a man of power, who takes the side of justice in an unjust world. Its implicit message of the impossibility of resistance may actually have made Kladivo more compatible to the authorities, much as the Chinese government had no problem with Curse of the Golden Flower's portrayal of a vicious ruler so long as the story made clear that resistance to him was hopeless.

Vavra's grim monochrome presentation elevates the stark story above exploitation, while the grimmer facts of history deny audiences the emotional satisfaction that an exploitation film ought to deliver. His film might still have gone over in the evil-wins environment of Seventies cinema, but its exploitation elements are probably coincidental, a late instance of the thematic convergence of art and exploitation upon subject matter outside the commercial mainstream. I like The Witches' Hammer; it's well acted and well shot and is bracing in its uncompromising chronicle of atrocity. But I don't know if many people will find such a bleak story entertaining; some may find it oppressively demoralizing. But if you liked Witchfinder General or The Devils, Vavra's film, if less flamboyantly acted than the former and less daringly visionary than the latter, is still worthy company for both.
Posted by Samuel Wilson at 9:20 PM

I have seen all 3 and their very well done.