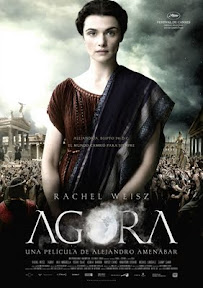 Alejandro Amenabar's latest film is an intellectual peplum, an old-school costume epic on the old theme of intolerance and the struggle of faith against free inquiry, a film almost guaranteed to fail at the American box office and one to make the blood boil. It's the story of Hypatia of Alexandria, one of the ancient world's exceptional female philosophers, and her doomed struggle against the rising tide of Christianity. I wouldn't be surprised if some folks who caught it during its short stay in U.S. theaters took it as an anti-Christian film. By the time it was done I was in a mood to burn a church myself, but Amenabar is actually quite careful, especially during the first half of his story, to establish, small comfort though it may be to Christians, that religion itself, and in particular the temptation of blind faith, was the problem in Hypatia's time. In the first act, the Serapis-worshippers who run Alexandria's famous library, where Hypatia teaches, are just as eager for a fight as the Christians are, just as bigoted toward the once-persecuted, now flourishing faith as its adherents are toward the pagans.

This charming exchange takes place the morning after a bloody battle in the agora, the marketplace that serves as the focus of public life in Alexandria. The Serapians tried to avenge an insult, found themselves outnumbered, and fought their way back to their fortified temple, while the enraged Christians settled down for a siege. In a sign of the changing times, the Roman authorities reach a settlement that'll spare the pagans, but forces them to abandon the temple and the library to the wrath of the Christian mob. Their triumph closes the first act of the movie.

The story picks up "some years later" and catches up with Hypatia (Rachel Weisz) and two erstwhile students: Orestes, once a disappointed suitor and now the Roman prefect, and Davus, once a slave with a crush on his mistress, now a Christian and part of the taliban-style street patrols who make life miserable for non-Christians, including an influx of Jews. In this case, too, both sides prove equally capable of atrocity. Tired of attacks and insults, a gang of Jews lures some Christian goons into a deathtrap, turning it into a stoning gallery. History, however, is overwhelmingly on the Christians' side as Bishop Cyril threatens to grow more powerful than Orestes and uses the prefect's continued loyalty to the "witch" Hypatia against him. Orestes has become a Christian himself, but will not kneel before Cyril when the bishop wields the Bible (an epistle of Paul specifically) as proof that the "witch" should be silenced. Orestes and another former student who has become a neighboring bishop urge Hypatia to at least go through the motions of Christian conversion, if only to save her life, but her classical integrity won't allow it. In a scenario imagined by the screenwriters, Hypatia is on the brink of discovering the elliptical orbit of the Earth centuries ahead of schedule when the reckoning finally comes. When it comes, it's Davus, once resentful of her for treating him like the slave he was, who has the only chance to spare her death by torture, though he doesn't have much to offer besides....

The Hypatia-Davus storyline serves to show that not even our heroine is perfect -- or even necessarily a heroine by 21st century standards. For all her enlightenment and commitment to reason, she never questions the institution of slavery. Davus's resentment also represents in miniature the resentments of the poor and oppressed that betrayed Christianity's call to peace. Agora strives to show that its Christians are driven by conflicting impulses. Ammonius, a kind of fakir who proves his faith by walking across fire, appears sincerely dedicated to helping the poor. He's also a vicious bully who achieves "martyrdom" by hitting Orestes in the head with a rock. The film consciously and provocatively invites viewers to equate the worst 4th century Christians with the worst 21st century Muslims. The Christians are the swarthier, dirtier, bearded ones, the ones in turbans, the ones with semitic accents, the quickest to anger when their god is insulted, compared to the more Euro or Anglo-style pagans. For some viewers, the message will be lost, since it will prove to them only that today's Muslims are about 1600 years behind Christendom in temperament and tolerance. How many will perceive a deeper message, one that suggests that inequality and oppression are the real causes of the violent resentments that find expression in intolerant religion, the provocations that make some people want to make everyone else kneel or bow or prostrate themselves, if only to prove that no one is better than anyone else? Not enough, I fear.

Agora is a beautiful film done the old way with real sets where and when it counts and a modest degree of CGI enhancement. It's story structure is awkwardly split in half, with a leap in time between two acts, but a handful of primary characters hold the story together. Some judicious telescoping of events may have made things flow more smoothly; as it is, Amenabar admits on the DVD that he mucked with history to keep one character alive past his time for the story's sake. The cast is good with the arguable exception of the star. Rachel Weisz isn't a bad actress, but she comes across too much like a Victorian bluestocking rather than the intellectual amazon Hypatia should seem to be. Her performance is constrained by the dispassionate character the screenplay gives her. The story (and the modern audience) needs a more fiery personality to express our outrage at the injustices playing out on screen. We're meant to celebrate her triumphs of reason and experimentation achieved despite mortal peril, but those scenes make her seem indifferent if not oblivious to the danger she's in. I don't know if the real Hypatia was a Stoic, but the film could have benefited from a Stoic perspective from which we could see that her approach was correct and her indifference to death admirable. Weisz might still win viewers over, however, if only more people gave Agora a chance. When I was a kid I always enjoyed watching "Bible" movies during the Christmas season. Agora probably doesn't count as a "Bible" film, but it's close enough for me this December.
Posted by Samuel Wilson at 6:17 PM

A very thoughtful review. I saw Agora when it first came out in NYC and loved Weisz' performance as Hypatia. I thought the film was beautifully shot, a bit uneven, but a wonderful exploration of modern themes in a historical context. However, this is a fictionalized version of Hypatia's life. Many folks forget that this is the artist's way of making a point and believe it's all true. For more about the historical Hypatia, I recommend a very readable biography Hypatia of Alexandria by Maria Dzielska (Harvard University Press, 1995). I also have a series of posts on the historical events and characters in the film at my blog - not a movie review, just a "reel vs. real" discussion.

I quite enjoyed this one. It played here for about one week then gone. While it's a bit deriviative, "Agora" does look beautiful. The one scene with a group of men standing in a circle talking with the black shadows edging around them was like visualizing a great painting.

I know Alemanabar, but I haven't yet seen this film Samuel. Another top-flight review, and one I'll return to after I watch it.

A Merry Christmas to you and yours Samuel!

faithljustice: you're definitely the go-to person for anyone wanting to measure the film against the facts we know. Your articles are fascinating, and your point about fictionalization is well made.

Joseph B: It deserved more recognition for art direction and cinematography alone, if not for the controversial symbolism of its story.

Sam: Anyone familiar with Wonders in the Dark should realize that your missing this is a real indicator of how poor its distribution has been in the US. Hopefully DVD will enable you to catch up.