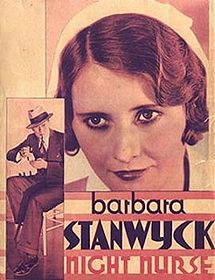 The trailer for William Wellman's movie promises an expose of previously unseen areas of society high and low. Part of the expose is the life and routine of the night nurse herself and her training as a probationary nurse. Our test subject is Lora Hart (Barara Stanwyck), who needs the work but lacks the credentials, having dropped out of high school to help support her family. In a sequence that sets the tone for the film, the throat-clearing head nurse rejects Lora flat despite her insistence on her capacity to make good, but on leaving she bumps by accident into the prestigious surgeon Dr. Bell (Charles Winninger), who intervenes personally to get her hired -- without any promise of quid pro quo, by the way. Night Nurse repeatedly opposes the formal system of rules (i.e. "ethics") against spontaneous instinctual goodness that sometimes crosses conventional, ethical and legal lines. 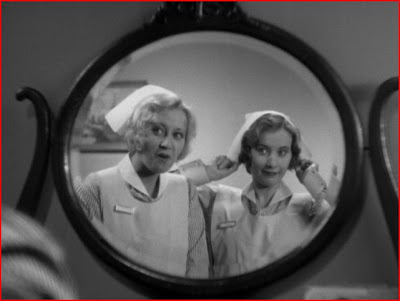 Lora's mentor is Bea Maloney (Joan Blondell), a more hard-bitten girl who shows her the ropes and shares her bed with Lora when a intern stuffs a skeleton into Lora's own bed as a practical joke. You can tell that we're in a "pre-Code" movie because Stanwyck and Blondell take advantage of every opportunity the script offers to strip down to their scanties. But even pre-Code cinema has its limits, and the nurses' relationship is strictly Platonic, at best. Blondell plays a generally sympathetic character, but one who lacks Nora's strong streak of rules-bending morality. Though they end up working for the same client as private-practice nurses, Maloney proves of little help in the crisis of the film's second half. 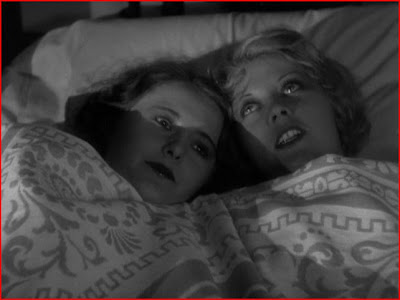 This bedroom scene between Barbara Stanwyck and Joan Blondell might have been the stuff of salacious fan fiction had such stuff existed in 1931. Maybe there's an undiscovered Tijuana Bible somewhere that followed up on the suggestion.

Before landing the private gig, Nora spends some time in the hospital maternity ward in one of the movie's oddest scenes. It's odd because nothing really goes on in it apart from Nora swaddling several babies and handing them to their mothers. But it looks like we're supposed to be impressed if not shocked by the fact that it's a racially integrated ward with white, black and Asian mommies awaiting their kids. We see Nora spend much time washing and treating a black baby, and what seems to be lost in translation for 21st century viewers is the sense of transgression the 1931 audience must have felt witnessing such a scene.

Nora starts bending the rules early, staying out late with Maloney and treating a handsome bootlegger (Ben Lyon) for a gunshot wound without reporting the incident to the police. Only later will this prove to have been the right thing to do. Lyon reappears throughout the film, though only at the end do we learn his name. Until then, Nora knows him only as "Bootlegger," despite his attempt to convince her that he's quit the racket. He's lying, of course, but it will turn out that his crime connections will come in handy for Nora.

She ends up as a private night nurse for the two small daughters of Mrs. Ritchey, a blond floozy who's a self-professed "dipsomaniac" and proud of it while suffering from "neurasthenia." She's a monstrously neglectful mother, and her private physician, Dr. Ranger, is doing nothing to make up for her neglect. Nora discovers that he's keeping the little girls on a starvation diet, enforced by Ritchey's chauffeur, Nick (Clark Gable at his most thuggish, perhaps ever). Nick and Dr. Ranger are plotting to starve the girls to death so that their trust-fund will revert to Ritchey, whom Nick plans to marry or otherwise leech from. Ritchey herself is too blotto to care, driving Nora to violence in her frustration. 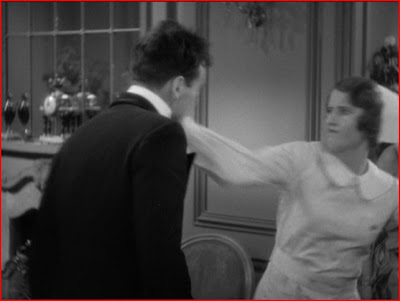 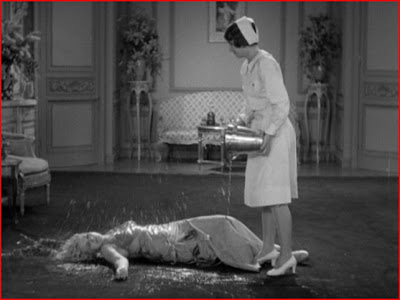 Nora takes her troubles to Dr. Bell, who proves reluctant to interfere with another physician's case, even though Ranger has a dubious reputation despite his extensive clientele. Medical ethics stays Bell's hand. To Nora, ethics are getting in the way of plain humanity. Her bootlegger pal makes possible a shortcut around conventional ethics when he turns out to be Mrs. Ritchey's hooch supplier. Learning of the Ritchey girls' plight from Nora, he uses special methods of persuasion on Bell, threatening offscreen to take him on the proverbial ride if he doesn't intervene. This forces a showdown between Nick and the good guys, and while the chauffeur is good at pushing around women and middle-aged doctors, he knows better than to go against a presumably loaded gun. Nick himself gets taken for a ride, since the law can't be trusted to eliminate him without a trial that could ruin Nora's career, since she would have to violate informal nursing ethics by airing Ritchey's dirty laundry, and that would make her unemployable as a night nurse. 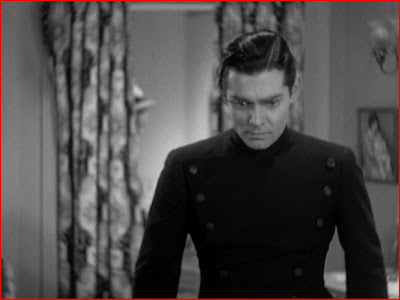 1931 was Clark Gable's breakthrough year over at MGM, but for Night Nurse at Warners he taps into a vein of evil that arguably wasn't ever seen again.

Night Nurse documents a moment of social breakdown, when the old rules seemed not to work anymore and lawlessness might be a viable alternative to injustice. In a way, it expresses the same impulse as the same period's fantasies of leaders with emergency powers to end the Depression or (ironically in the context of Night Nurse) crush crime. But while such films as Gabriel Over the White House fantasized about leaders ruling by decree, Night Nurse portrays the little people bending or dodging rules that got in the way of people's survival. In that way it might have been a more subversive movie than Warner Bros.' more controversial gangster films, since those usually ended with the transgressor getting his comeuppance. Nora may not get to be a night nurse anymore, but she seems pretty well set up regardless as a gangster's moll, whatever Bootlegger Morty may say about reforming.

During her time at Warners, Barbara Stanwyck was probably the studio's closest female equivalent to its tough-guy stars, James Cagney and Edward G. Robinson. Night Nurse brings her quite close to their world, even allowing her to floor a man with one punch. Stanwyck may not be able to match Joan Blondell's hard-boiled attitude, but she radiates a raw power that completely eclipses her sidekick. She's utterly unintimidated by Gable, but she also sells his brute force by taking a hard shove into a door. It's not necessary for her to go toe-to-toe physically with Gable (as she might if Night Nurse were made today) since the moral of the movie requires the "good bad man" bootlegger to do the right thing at the crucial moment. By that point, Stanwyck has more than established her tough-chick credentials.

Night Nurse is one of seventeen movies William Wellman made from 1931 through 1933, mostly at Warner Bros. This one is on the Forbidden Hollywood Collection Vol. 2 box set, while six more Wellmans make up Vol. 3. On the evidence of these films (not to mention The Public Enemy) Wellman was one of the dominant directors of the early Depression years, shooting out films with rat-a-tat frequency and fairly consistent quality. There are still plenty of Wellmans from this little epoch awaiting rediscovery, but Night Nurse stands out as an exemplary pre-Code film as well as a representative Wellman product.
Posted by Samuel Wilson at 9:42 PM

Samuel - This film is a must for any pre- code fan. It has just about everything as you skillfully mention. Semi-dressed women, neglectful mother, unethical morals, violence against women and more. Stanwyck is one tough cookie here and she and Blondell are a great team. Gable is a big slime.
Wellman may just be the King of pre-code. He certainly did his best work during this short period. Have you seen Wild Boys of the Road, or Heroes for Sale? Definitely, must sees.

Sounds great! I have Forbidden Hollywood Volume 1 and will be getting Vol. 2 next. I love Stanwyck. She was great in "Baby Face."

A great review - I love this films rawness, in particular.

The Clark Gable/Barbara Stanwyck rape scene always comes to mind as one of the great and daring pre-code moments (though it's not directly shown).

As a Stanwyck fan, I love the toughness she gets the chance to display here. And of course, it's wonderful to see her with another cool lady; Joan Blondell.

John: I've seen both those films and I've written up Heroes For Sale here, as you'll find if you follow the Wellman tag. He was definitely on fire in that three-year period, and he did some outstanding work afterward as well.

Meredith: All the Forbidden Hollywoods are great stuff. Stanwyck turns up on Vol. 3 in The Purchase Price, and with luck a Vol. 4 will give us more of her.

Sebina:Stanywck may be the queen of pre-Code, but I admit that she has a lot of worthy competition for that honor.

She indeed has a lot of worthy compitition for that title :)