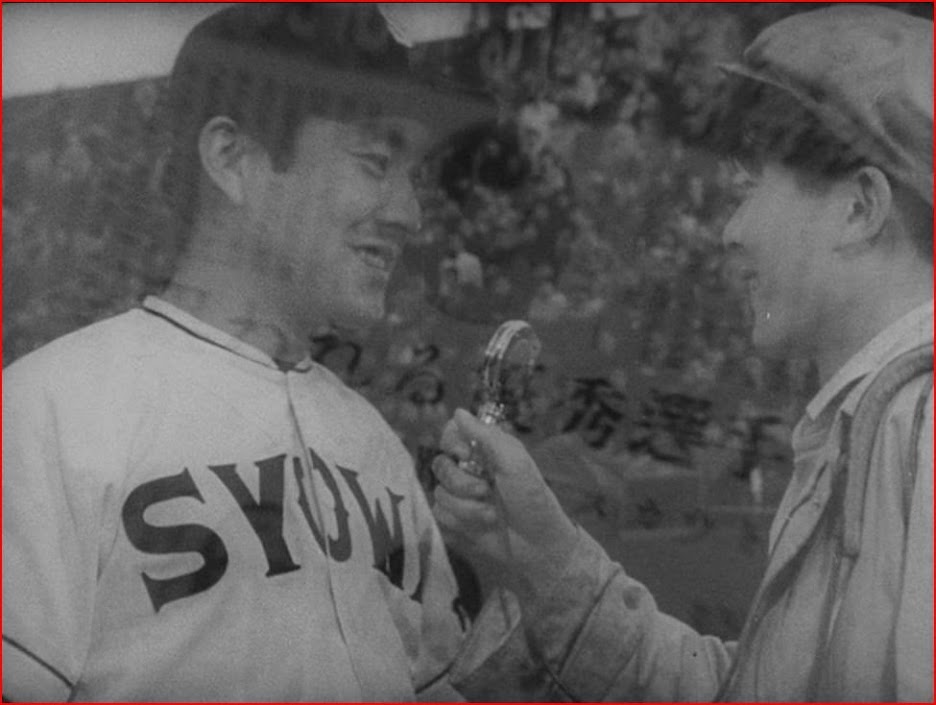 What's the best baseball movie ever made? American fans have many possible answers -- my own pick would be John Sayles's Eight Men Out (1988) -- but foreign baseball films never enter the discussion. Who here has seen any? The American release of I Will Buy You with the Criterion Eclipse collection Masaki Kobayashi Against the System was my first chance to see one. I knew that Japan had made baseball pictures -- the American game is one of their national pastimes. Even Toshiro Mifune put on a uniform in the 1955 film No Time For Tears, and for all I know the Kobayashi film is just the tip of an iceberg of Japanese baseball films. There may be baseball movies from Cuba and elsewhere in Latin America worthy of consideration as well, but that's a subject for another time. For now, it's arguable that as the auteur of The Human Condition, Harakiri, Kwaidan, etc., Kobayashi is the greatest director ever to make a baseball movie -- unless you count John Ford for the two baseball-themed TV programs he directed. Everything depends on how you define a baseball movie. If you define it narrowly as a film in which the dramatic climax is a baseball game, the field becomes very limited and Kobayashi is out. I Will Buy You is actually something closer to Sweet Smell of Success on the baseball diamond: a rat-race noir lamenting the corruptions and compromises of commercialized existence. 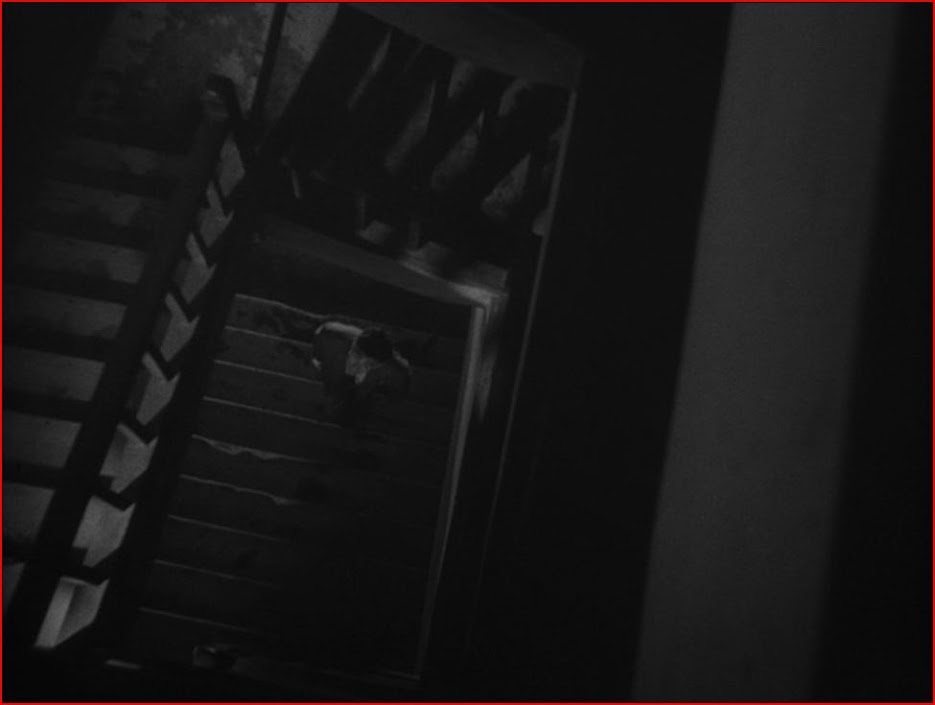 A noirish entrance into a twisted world

Kobayashi's film chronicles the intense competition among several professional clubs for the collegiate star player Goro Kurita (Minoru Ooki). College baseball in Japan was apparently a bigger spectator sport in the Fifties than its American counterpart was -- or is today, compared to college football or basketball. Speculation over whom Kurita will sign with becomes a sports-media obsession, making this black-and-white movie seem very contemporary for modern viewers. We root by default for the Toyo Flowers, whose scout Daisuke Kishimoto (Keiji Sada) is our protagonist. We first see him on a long trek to sign another prospect from the provinces, who ends up useless because he's lost a finger in an accident. That adds to the pressure to bag Kurita, but to do so Kishimoto has to butter up Kurita's personal coach, the dyspeptic Ippei Kyuki (Yunosuke Ito). Kyuki claims to hate everyone except his meal ticket Kurita. He spurns Kishimoto's gift of fine sake because he's on medication, but Kobayashi allows a suspicion to build that Kyuki is at least partially shamming as part of his emotional manipulation of Kurita and his family. Goro's brothers are self-interested negotiators in their own right -- Kishimoto equates one of them with Godzilla in a telling early acknowledgment of a rival studio's blockbuster from two years before. Kyuki claims that the family authorized him to negotiate exclusively on Goro's behalf, but opportunities arise for everyone to change their minds. Complicating the negotiations further are the Taniguchi sisters, girlfriends of both Kyuki and Kurita. The rival clubs will play Kurita's friends and relatives against each other, each thinking he or she has a special influence on Goro, but none having as much as any thinks. 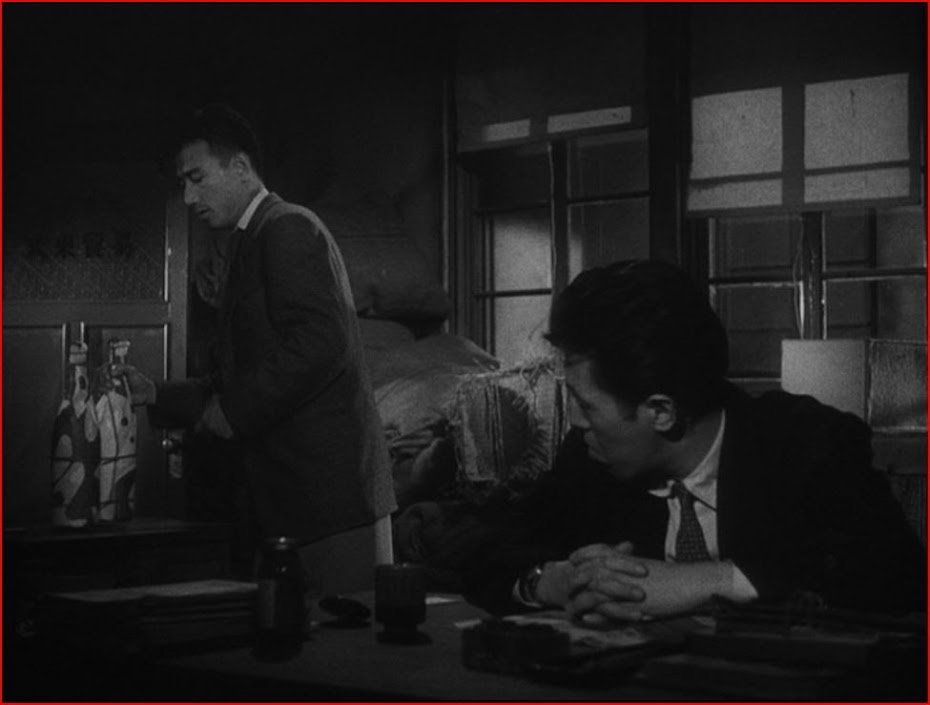 Above, Kishimoto makes Kyuki an offer he can refuse.
Below, is Kyuki's agonized farewell at the train station just a game? 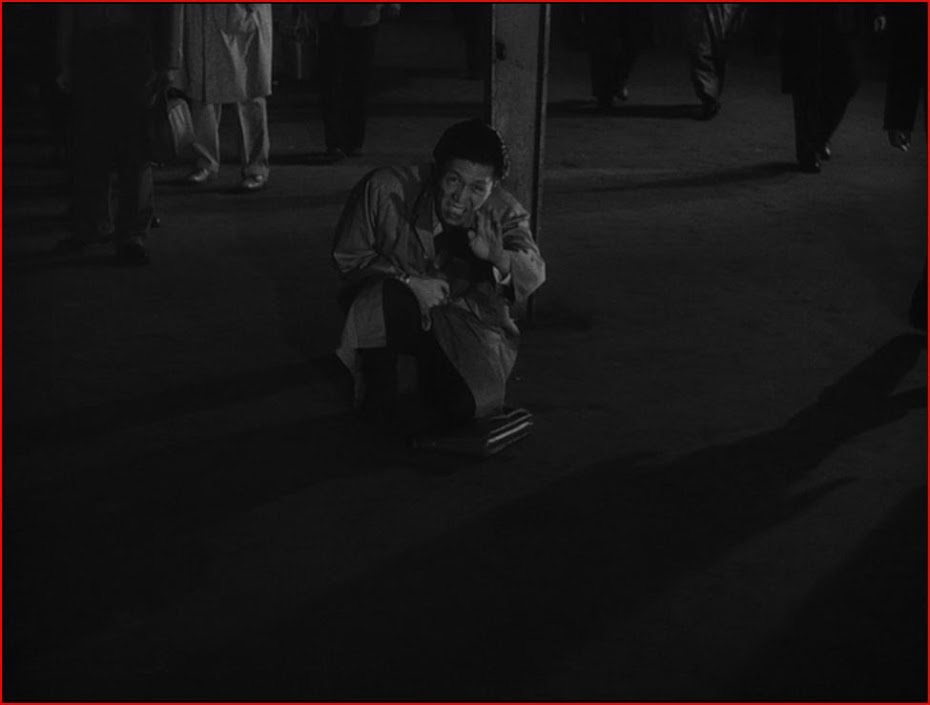 Resuming its modern role as America's top pupil after World War II, Japan shared Americans' postwar perplexity at the rise of the "organization man" or "salaryman," as if the white-collar vanguard were Nietzsche's dully decadent Last Men if not something more sinister. There's something quaintly naive in the shock expressed in this era at the prevailing "business is business" attitude, and I Will Buy You can't help but seem very quaint in its horrified discovery that baseball is a business. The real horror, however, isn't so much the system but the way the cogs turn on one another in pursuit of personal advancement. Kobayashi remains conscious throughout of the emotionally manipulative nature of the material, and he manipulates it cleverly, keeping you wondering how sick Kyuki really is and thus walking a melodramatic tightrope.  The payoff feels almost unintentionally ironic; after everyone has tried to manipulate Goro's choice to suit their selfish interests, he ends up making a decision pretty much for his own baseball-based reasons. Yet Kobayashi has so immersed us in the emotional urgency of all the competing interests that Goro ends up looking like a selfish bastard. The moral can only be that the "system" has made a tragic outcome inevitable by pitting everyone against each other and flourishing on that competition. Inevitably it seems overwrought, but maybe our judgment is jaded. It's possible that in our complacence over what "business" requires of us that we need to go to the past to see the present with fresh eyes. I Will Buy You is minor Kobayashi and no rival to the best American baseball movies, but to the extent that this Japanese picture mirrors our own sports culture, it may still make you think about how our culture or our attitudes have changed in half a century or so -- for better or worse.
Posted by Samuel Wilson at 10:55 PM