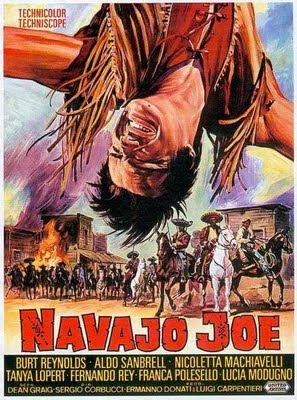 Quentin Tarantino probably thinks more of this Sergio Corbucci western than anyone actually involved in making it. Burt Reynolds once described filming it and playing the title role as the worst experience in his life, and Navajo Joe definitely takes a position toward the rear of the Corbucci western filmography. Only Ennio Morricone emerges with honor, albeit under his "Leo Nichols" pseudonym. Tarantino used some of the Navajo Joe music in the Kill Bill films, and the gimmick of carving a symbol on a victim's forehead in Inglourious Basterds has roots in the Corbucci picture. It sounds good (the "Na-ha-vo Joe Na-ha-vo Johhh" chant is quite an earwig) and the locations often look terrific, but boy, the story is dumber than a bag of posts.

It's really just a by-the-numbers spaghetti story, the numbers all being well known already in 1966. Fernando di Leo, who wrote for Sergio Leone and assisted him in directing For a Few Dollars More, contributed to the script, but none of the three credited writers seems to have contributed much of interest. Navajo Joe is noteworthy only for having a Native American hero, when it was rare for Italian westerns to have Indians in them at all. Joe (usually called "the Indian") is really a spaghetti hybrid, a "bounty killer" and an avenger at once. His own grudge against the bandit leader Duncan (Aldo Sanbrell) leads him to defend an unwelcoming town against Duncan's private army. The town fathers distrust him because of his race. His only allies are an Indian woman (Nicoletta Machiavelli) and the saloon-folk refugees Joe rescued from Duncan's pillage of another town. Joe hardly needs allies, being practically a one-man army. Having allies only handicaps him -- or else giving him vulnerable allies was the only way Di Leo et al could arrange for Joe to suffer the hero's obligatory beating mid-picture.

The picturesque world of Navajo Joe.

This is where Navajo Joe jumps the shark for me. The translated screenplay was already pretty bad and the taciturn Joe is an utter waste of Reynolds. The energetic action sequences -- exceptionally for a spaghetti hero, Joe relies less on fast guns than on hand-to-hand attacks, fighting in what Tarantino calls a "blitzkrieg" style -- seemed likely to redeem the picture until Duncan manages to take the Machiavelli character hostage, compelling Joe to surrender when he'd been leisurely sniping bandits from a rooftop by threatening the lady. Joe does surrender and takes his beating before being hung upside down. Then we discover that Duncan, who has blithely massacred everything in his path to this point, has let Machiavelli go to wander about freely and rally the saloon folk to help Joe escape. He expects Joe to tell him where he and the townsfolk have hidden the bank's reserves, but he has given up the only thing that gave him leverage over our hero! That's too stupid to forgive, and at that moment the film lost me.

I can understand Reynolds's disappointment, though I hope he didn't simply resent all the running and jumping Corbucci required of him. His contempt for the pretty contemptible dialogue is apparent in every line he utters. You can see the logic of casting him; another young American making his name on a TV western could be the next Eastwood. The part seems all wrong in retrospect once Reynolds's movie-star persona evolved fully, but it should have seemed wrong to the filmmakers at the time, or maybe it would have had the Italians understood English better. As Joe, Reynolds is all physicality and no personality. He fared better in a more suitably roguish role in the Tom Gries-Clair Huffaker western 100 Rifles a few years later. Navajo Joe is probably a more impressive film than 100 Rifles visually, not counting Racquel Welch as a visual asset for the latter, but you'll really need to turn your brain off to enjoy this ride.
Posted by Samuel Wilson at 12:21 AM