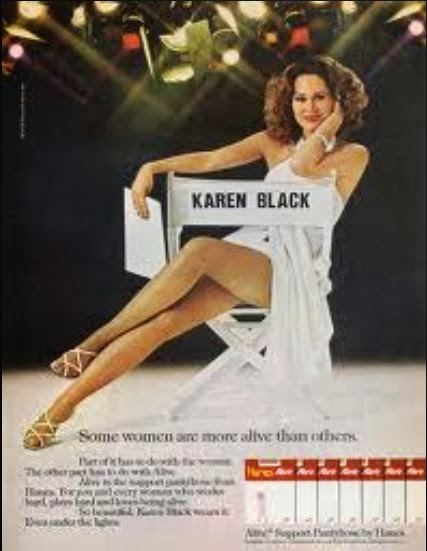 She made her name with cutting edge American movies, appearing in three Raybert/BBS projects: Easy Rider, Five Easy Pieces and Jack Nicholson's Drive He Said.  But to understand why she is an icon of Seventies cinema, look at the the three-year period from 1974 through 1976. In that time, she appeared in the literary adaptations Rhinoceros, The Great Gatsby and The Day of the Locust. In the same time, she appeared in Airport 1975. In the same time, she worked for Alfred Hitchcock (Family Plot), Robert Altman (Nashville) and, for many most famously, for Dan Curtis, on film opposite Oliver Reed in Burnt Offerings and on TV in four roles in the three stories that make up Trilogy of Terror. For those who remember it all, she is the stewardess who flies the plane and the woman who fights the fetish doll -- and many others. Black soon achieved a ubiquity which proved indiscriminate. She kept on working until cancer claimed her, her filmography growing increasingly obscure. History's verdict is that she belongs to the Seventies. For those of us who grew up in those years, it's hard to realize that they're now as long ago as the 1930s were to us. They seem just a little further away today.
Posted by Samuel Wilson at 7:37 PM

The Day of the Locust was her finest moment as an actress. She was also superb in the very rarely-seen The Grass Is Singing (a Swedish-Zambian co-production also released as Killing Heat.)