After an uninspiring week when Mary Stevens M.D. was the highlight in Milwaukee, let's take a fresh look at what's playing. Star vehicles predominate this week, starting with one of the hottest actors of the year so far. 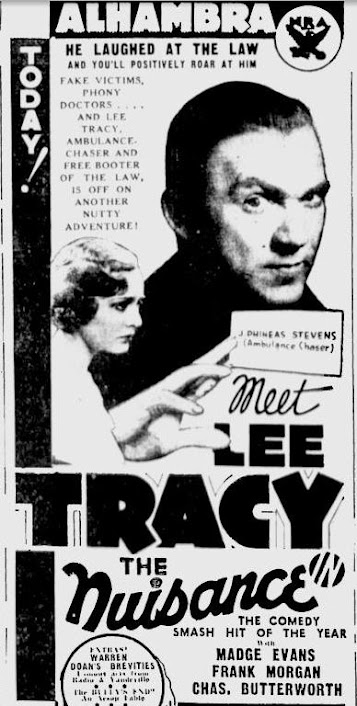 Lee Tracy as an amusingly unscrupulous ambulance chaser seemed a natural at the time. Here's how M-G-M promoted it to movie audiences, thanks to TCM.com.

The big Metro release of the week is a two-star affair reuniting America's unlikeliest sweethearts. 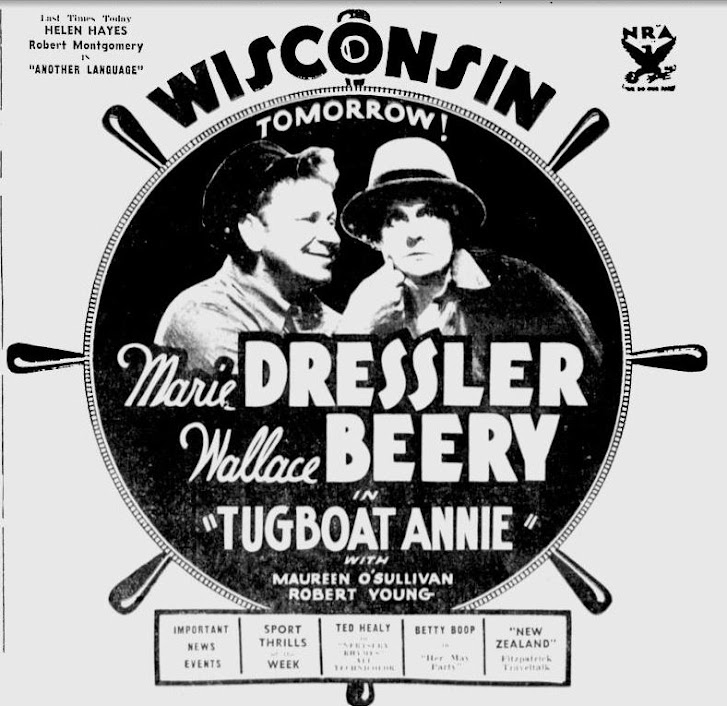 The title character appeared in a series of comic stories in the Saturday Evening Post starting in 1931. Norman Reilly Raine wrote Tugboat Annie stories into the 1960s and the character got a short-lived TV series in the 1950s. As for Dressler and Beery, the 1930s was one of those periods, like the 1970s, when unconventional figures and personalities could become matinee idols. Dressler had only a year to live, while Beery settled into B pictures (by M-G-M standards) by the end of the decade.

Speaking of older stars, here's one of the oldest. 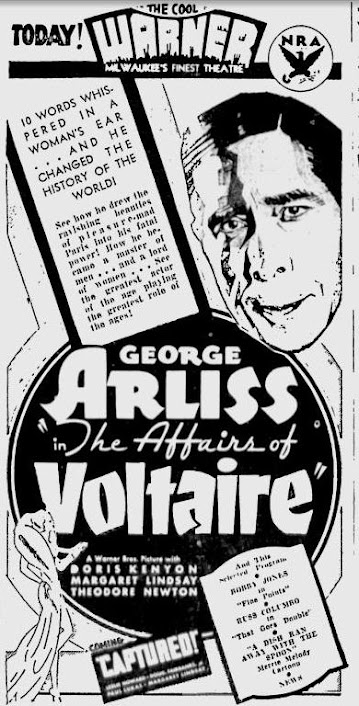 TCM ran Voltaire a while ago and I managed to see it. Arliss is an odd actor, alternating between raspy, sardonic underplaying and hambone histrionics. He isn't exactly my idea of Voltaire, but he does hold your attention. Warner Bros. took a more entertaining view of pre-Revolutionary France in Madame du Barry the following year. This is a rare Warner Pre-Code feature for which TCM does not have a trailer, alas.

Here's an old star in a different sense of the word old.

Swanson wasn't as thoroughly eclipsed by the coming of sound as her alter ego Norma Desmond. Her first talkie had actually been a hit, but she seems to have been one of those star personalities who too well embodied an era that the Depression had made repellantly obsolete. She'd make Music in the Air the following year, then only one more feature between 1934 and Sunset Blvd. in 1950.

Finally, there is stardom, and then there is celebrity. Other Milwaukee theaters may depend on star power this week, but the Palace takes a chance on one of the year's unexpected celebrities.

I doubt whether this silent clip uploaded to YouTube by travelfilmarchive is the actual footage Palace patrons saw, but it's the only footage I could find that was definitely from the Streets of Paris attraction at the Chicago fair. Sally's bit starts at the 2:39 mark and goes to the end of the clip.

As the ad says, judge for yourselves!
Posted by Samuel Wilson at 6:53 PM