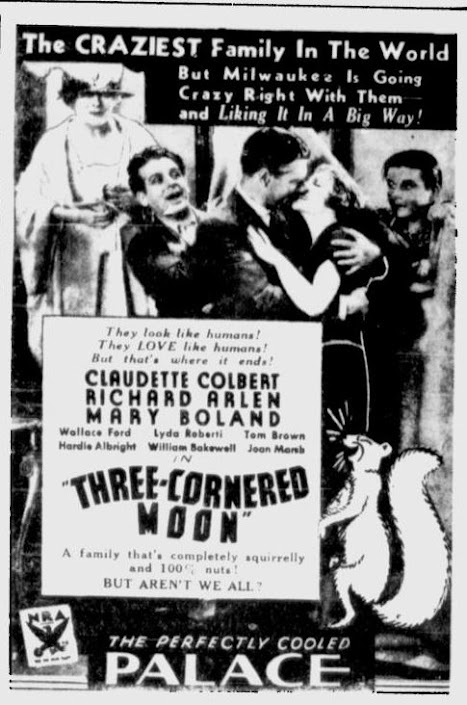 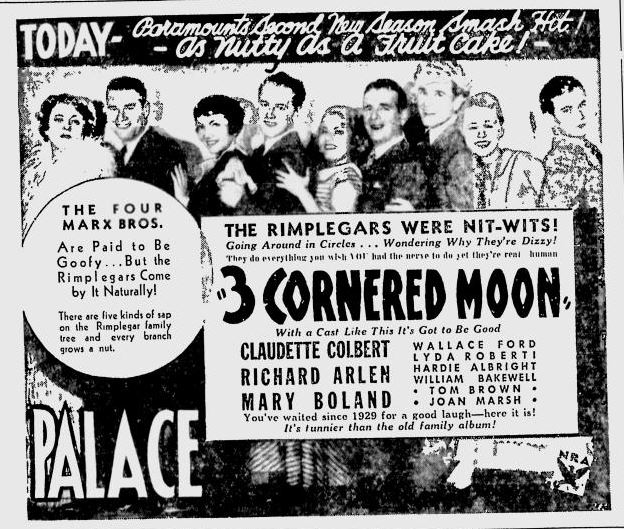 The comparison to the Marx Bros. (whose Duck Soup is coming soon) is weird. I mean, the Marxes were real-life performers, so yes, they're "paid to be goofy," but it's not as if the Rimplegar family is real. Colbert, Arlen, et al were being paid to be goofy just as much as the Marxes were. But maybe we have here a hint at the difference between screwball comedy and the Marx Bros. style. With the Marxes, it's impossible to suspend disbelief; regardless of what the brothers are called in any given picture, they're their standard selves every time and we all know it. But with screwball, perhaps, we're encouraged to believe in and empathize with the characters, even if we know they're played by familiar stars. That's not the whole picture, but it's part of it. Discuss it amongst yourselves.

At the Warner, William Powell is snooping around. 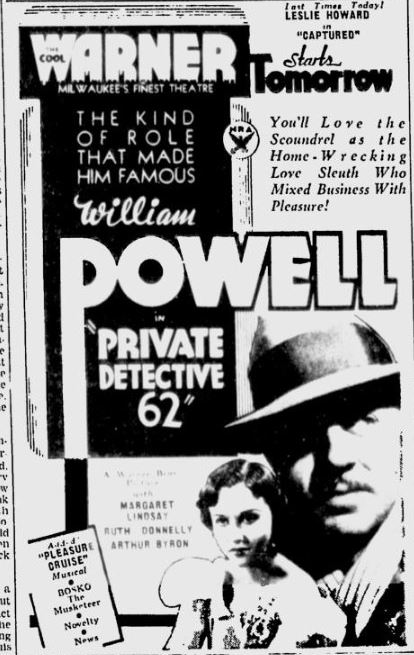 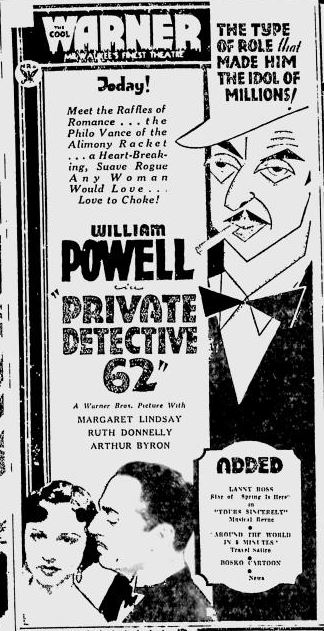 Based on my short study of the advertising for John Gilbert's talkies, I take it as a warning sign whenever movie ads talk about the sort of role that made the star famous. You can probably infer that the star isn't quite as famous as he was. Fortunately for Powell, his greatest popularity was yet to come, but it would take a different studio to set him right.

However it fits in Powell's career, this Michael Curtiz picture looks like prime Pre-Code material. Here's the original trailer from TCM.com

The Veterans of Foreign Wars were in Milwaukee for a convention this week, and some of the big theaters programmed accordingly.

Here's a weird way of promoting your picture while barely saying a word about it. 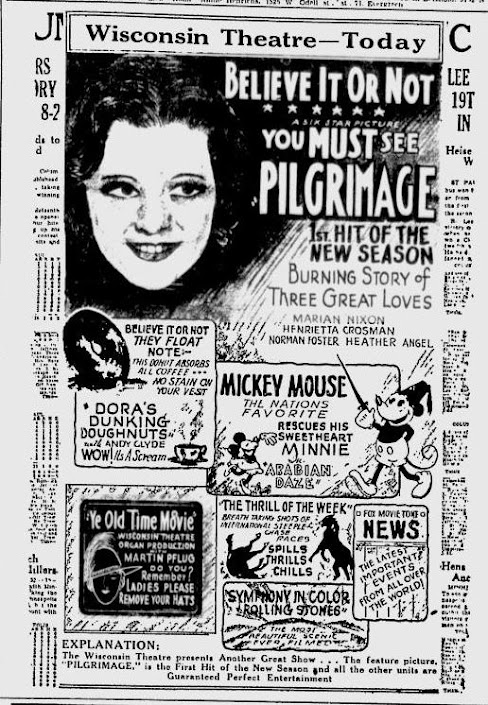 John Ford's Pilgrimage had been sitting in my DVR queue for nearly a year before this week's article gave me reason to give it a look. I wonder what an audience of veterans made of it. Indeed, I wonder what Ford fans today make of it, since here the old sentimentalist gives us one of cinema's most hateful mothers. Henrietta Crosman gives an alarming performance as a crabby old lady who at first won't let her son fight in the Great War, then practically pushes him into it rather than have him marry a girlfriend she considers trash. The boy suffers a brutally ignominious death while the girl gives birth to his son, condemned to be a bastard because they didn't have time to marry. After the fact, the old lady still shuns the girl, and her own grandson, as if blaming them for her son's death. Then the picture becomes a fish-out-of-water comedy as Crosman reluctantly joins a delegation of Gold Star Mothers on the title trip to France to see their sons' graves. An ominous tone hangs over the comedy as the mother remains crabby while we suspect that a terrible catharsis is coming. Even though Ford predictably softens in the second half, having Crosman save a young Frenchman from suicide so she can see the error of her ways by learning his story, a mirror of her son's, and setting things right, the first hour of Pilgrimage probably struck many 1933 viewers, even those grown cynical about the war, like a punch in the face. I can imagine how Milwaukee audiences might have felt if that goofy ad drew them to the picture. But maybe I should give them more credit. Problematic as it is, Pilgrimage is an admirably ambitious picture, the first half especially showing Ford in his High Art mode, and Crosman's is a convincing, compelling performance. It's certainly a unique way of addressing people's ambivalence about World War I, and it's hard to imagine Ford or anyone else updating it for World War II. Vietnam, maybe.
Posted by Samuel Wilson at 10:52 PM