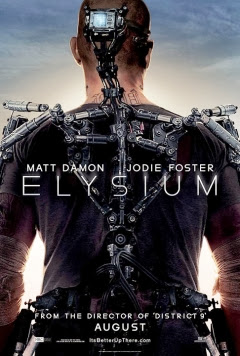 Neill Blomkamp's follow-up to his sleeper hit and Oscar nominee District 9 is another futuristic allegory that appears to expose the writer-director's creative limits. It's another stark tale of widening inequality, this time set in a 22nd century in which the wealthy have fled Earth in favor of the ultimate gated suburb: the titular satellite community, a utopia for a mostly-white population, albeit with an Indian president of apparently limited powers. Below, Los Angeles has been transformed into a massive shantytown of mostly brown people, where Max Da Costa (Matt Damon) is an exceptional poor white who proves exceptional in other respects. He's an orphan raised by nuns alongside a girl, Frey, who grows up to be a nurse (Alice Braga) with a sickly daughter. Max grows up to be a criminal, but is now trying to go straight despite constant hassling from the robot police. When he suffers radiation poisoning in an industrial accident he becomes one of the multitudes desperately hoping to sneak up to Elysium via the pirate shuttle racket operated by Spider (Wagner Moura). Blomkamp makes the class divide as stark and dystopian as can be imagined. Every Elysium home comes with a Medi-Pod that cures all ills and ensures effective immortality for those who can afford to move there. Smugglers like Spider are the coyotes of the 22nd century, taking people's savings in return for a chance to breach the Elysium defenses, land safely and find a house where they can put themselves or their children into a Medi-Pod. The few who make it through the land-based missile defense operated by goons like Kruger (Blomkamp alter ego Sharlito Copley) get caught by police droids, a bare minimum managing to find a Medi-Pod before getting deported. In case you can't guess, Blomkamp sees health care more as a right than as a privilege.

Given five days to live after his accident, Max is desperate to reach Elysium by any means necessary. His criminal connections give him a chance. Spider promises him passage in return for Max (aided by an exoskeleton implanted over his clothes, which he'll apparently never change again) helping him kidnap an Elysian executive (William Fichtner) who happens to be Max's employer, on Earth to inspect a factory. Spider hopes to score insider information from the memory implants in the executive's brain, but his gang soon realizes that they've stumbled on something far more valuable. The executive is in on a conspiracy with Elysium's defense secretary (a Thatcherish Jodie Foster) to overthrow the government via a forced shutdown and reboot of the satellite's operating system. Somehow this will allow Secretary Delacourt to reprogram the government to replace the president, either with herself or someone compliant. This knowledge is obviously highly valuable in its own right, but Spider also realizes that a reboot would allow someone to rewrite the citizenship rolls. He could make everyone on Earth a citizen of Elysium and thus eligible to use Medi-Pods without getting bootleg genetic IDs tattooed on their arms. Why Spider should thus undermine his own racket is unclear, but he can't do anything once Delacourt imposes a no-fly zone to facilitate the hunt for whoever killed the executive and stole the data. That means Spider can't get Max into the air, much less into orbit, so with time running out he gets the idea of revealing himself and surrendering the data in return for time in a Medi-Pod. Unfortunately, he has to deal with Kruger, recently fired by the government but clandestinely rehired by Delacourt, who evolves an agenda of his own once he realizes the significance of the data involved. Before Max turns himself in, Kruger takes Frey and her dying daughter hostage, having learned that Max had come to her for emergency assistance after his first fight with Kruger. They come along for the ride to Elysium, Kruger having bad intentions for the lady. Delacourt lifts the no-fly zone the moment Max surrenders, so Spider sends a ship after him immediately. Needless to say, Max will face several ethical dilemmas before his story ends....

However radical Blomkamp may imagine himself, with Elysium he's gone Hollywood. This film has a more-or-less happy ending, or at least one in which good triumphs. Whether the victory is sustainable is another story that we're not likely to see; Blomkamp seems uninterested in the implications of the upheaval he portrays beyond making his allegorical editorial point. Apart from that point, he's made something sadly close to an utterly generic action movie. The worst part of that is that Blomkamp doesn't prove particularly good at generic action -- though his direction of action is generic by current standards in its near-incoherence at many points. He aims for a frantic feel at the expense of clarity. Worse, despite his avowed concern for the masses, he caters to Hollywood's need to exalt the special individual. Max is told as a child that he can accomplish something unique, and by gum, he does! Also, despite Matt Damon's good intentions, the fact that he plays this potential savior rather than someone who looks more like the rest of Max's neighborhood rankles me somehow. I don't usually get politically correct about such things, but since Blomkamp himself strives for a kind of political correctness his casting of the hero, however necessary from a business standpoint, ought to be questioned. His worst mistake, however, was probably his indulging his buddy Copley in an over-the-top yet insubstantial performance that metastasizes from flunky to big bad, seemingly on an auteurial whim. Blomkamp apparently wants us to see Kruger as an epic badass villain, but Copley can't pull it off, and the film falls apart on his shoulders. Foster is getting some of the worst reviews of her career for what's admittedly a thankless villain role, but it's Copley who really lays an egg here, and Blomkamp's loyalty to him may be his own undoing, on top of his own faults. From my perspective, Blomkamp's heart is in the right place, but that never guarantees a decent movie. In a summer already notorious for expensive duds, Elysium is likely to be another.
Posted by Samuel Wilson at 10:36 PM