As Metro-Goldwyn-Mayer's all-purpose ethnic player, Ramon Novarro boasted to at least one magazine during the production of Clarence Brown's film that he could and would play Chinese without makeup. Here Novarro found his limit, however, for on film he wears, at the least, more makeup than Edward G. Robinson did for The Hatchet Man. Worse, with Son-Daughter cast entirely with non-Chinese in makeup, Novarro's accent, previously his main asset as an ethnic specialist, makes him stick out as more foreign yet less "Chinese" than the rest of the ensemble. Worse still for a star fighting to survive as new standards of cinematic masculinity undercut his standing as a leading man, Novarro's is a supporting role.

The star of the show and title character is Helen Hayes, the future First Lady of the American Theater and defending Academy Award champion as Best Actress for her work in The Sin of Madelon Claudet. Movie fans may remember Hayes as a lovable old lady in Seventies movies and the winner of a second Oscar for Airport. If they're less familiar with the younger Hayes, despite the first Oscar, that may be because in 1935 she beat a hasty retreat from Hollywood after a box-office losing streak and made no other films, apart from a cameo as herself in Stage Door Canteen, until the 1950s. Son-Daughter will give you an idea of why she fled. In short, Hayes is awful, trapped in a stereotyped conception of a romantic Chinese woman that was already antique when she made the movie. Brown's film is based on a play by David Belasco, whose interest in things Asian also resulted, indirectly, in The Hatchet Man and the opera Madame Butterfly. The Son-Daughter is a tale of intrigue in the Chinese-American community at the time of the 1911 revolution that replaced the Manchu Dynasty with a republic. The progressive Chinese of San Francisco are raising money to buy arms for the revolutionaries, while agents of the Manchus seek to thwart them by trickery and murder. One of the progressive Chinese is Dr. Dong Tong. Lewis Stone plays this role, and while that fact slowly settles in your mind let me inform you that even he is more plausible as a Chinese than Hayes. She plays Lian Wha, his daughter, beloved and yet a disappointment to her father simply because she's female. She has a crush on Mr. Tom Lee (Novarro), a college student who turns out to be the incognito son of a pro-revolution prince. Hayes and Novarro enact some insufferable scenes of Chinese courtship as imagined by Belasco and his successors at M-G-M. These scenes are best left to an imagination best left suppressed. But woe! They cannot marry, not even after the good doctor learns of Tom's princely heritage. Instead, Dong Tong must arrange her marriage to a rich businessman, for money, for the cause. The revolutionaries need to raise $100,000 to get another crucial shipload of arms across the Pacific, and four arranged marriages, at a price, should do the trick.

Alas, the Manchu hatchet men are on to the plan. Led by the mysterious "Sea Crab," they eliminate three of the prospective brides. That leaves only the reluctant Lian Wha on the market, but when the chips are down and the old country's future is on the line, our girl earns the coveted "Son-Daughter" title by forcing up the bidding until one lucky man has to pay the whole hundred grand -- in 1911 money! -- to win her hand. That Helen Hayes in yellowface is considered worth the equivalent of eight figures in modern money is possibly this film's most fantastic element. 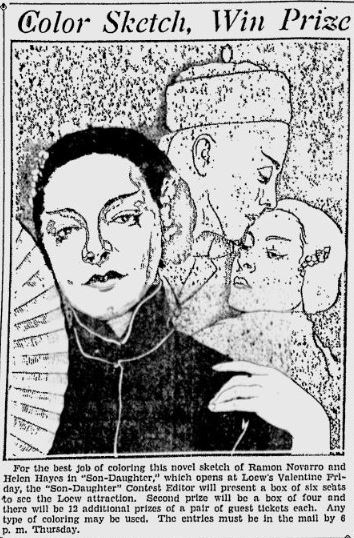 Here's a promotional contest from a Toledo newspaper.

Still greater woe! The winning bidder is the gambler Fen Sha, who we know already to be none other than Charlie Ch --I mean the Sea Crab. Yes, it's Warner Oland, who by the standard set by the rest of the cast may as well be Chow Yun-Fat, so much closer does he come, if only through familiarity, to the illusion of authenticity in Chinese parts. When playing Chinese, Oland had two choices: he was Charlie Chan, or he was the villain. Here he is not Charlie Chan, though the film arguably makes an inside joke at Oland's expense after Fen Sha's Manchu handler answers a run of Chan-style shtick with "I find proverbs wearisome." More appealing to this imperial stooge is Sea Crab's scheme to marry the girl, kill Dong Tong, keep his money and keep the arms ship in San Francisco. He has the doctor whacked during his carriage ride home from the wedding. Check. He pockets the bride price. Check. When Tom Lee intrudes on his villainy, Sea Crab shoots him. Bonus. But in the moment of his triumph, Sea Crab hasn't reckoned upon the wrath of the Son-Daughter. What follows could only have been more absurd had Hayes and Oland used kung fu on each other, but it doesn't look like anyone in America in 1932 knew what kung fu was. (Aside: it's hilarious to read pulp fiction of the period and see American writers assuring readers that Chinese people don't know how to fight). Instead, birdlike Hayes takes out burly Oland by strangling him with his own queue of hair, the proverbial pigtail of racist caricature.  At film's close she's making sure those arms get to China by riding the ship herself. Heaven help the Manchus.

Unlike the ad at the head of this review, some of the Metro publicity was more coy about how the stars would look in the movie, even while presuming common knowledge of the original play.


The Son-Daughter boasts some impressive sets and some menacing cinematography from  Oliver T. Marsh. It often strikes the right notes of intrigue and suspense, and might almost count as a good movie whenever the star is off-screen. Poor Novarro has what looks like a hero role, but given the femme focus he ends up more like a stooge. He needed to stay away from roles like this one and his in Mata Hari where he merely squires the leading lady. Such roles, I suspect, did more to undercut his stardom than any suspicions about his sexuality. Reviewers recognized Son-Daughter as part of an "oriental cycle" that lasted through the Pre-Code era and went in some more intriguing directions (e.g. The Bitter Tea of General Yen, The Cat's Paw) before it was over. Compared to M-G-M's other, better-known contribution to this cycle, The Mask of Fu Manchu, Son-Daughter may as well be Cheyenne Autumn, but the typical refusal to cast authentic Asians (C'mon man! Anna May Wong even had experience killing Warner Oland on screen) can't help making Brown's picture look nearly as racist as that more overtly Sinophobic picture.  I'm sure the creators dating back to Belasco had good intentions in portraying Chinese longing for liberty, but in its final film form Son-Daughter now has little more than camp value.
Posted by Samuel Wilson at 7:16 PM