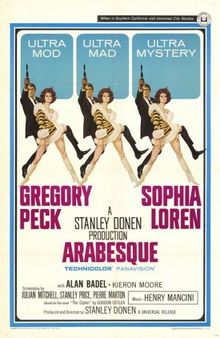 Stanley Donen's would-be comedy thriller is the sort of picture that normally tempts me to make a lot of screencaps. This time, however, I felt that I'd somehow be sending a wrong message. For a while, I was very impressed with the compositions of Donen and cinematographer Christopher Challis, but the self-conscious brilliance of it all began to get annoying after that while. The images call attention to themselves too blatantly and the constant recourse to catching the actors' reflections in a variety of surfaces eventually seemed pointlessly pretentious, especially as it sunk in that I was paying too much attention to the cinematography precisely because the story was an empty thing. It wants to be a suspenseful lark in the manner of Donen's Charade, and much of the ballyhoo for this picture identified Donen as the maker of that popular film. Three years separate the two pictures, but by 1966 a camp sensibility was sweeping the land, and you see it all over Arabesque. You hear it, too, in Henry Mancini's generic score. There's a more blatant artificiality to its contrivances, accentuated by all the fake Arabs in the cast. There's also arguably something campy about casting a relative stiff like Gregory Peck in a Cary Grant type role as an archaeology professor caught up in the factional struggles of an unnamed Arab nation. Peck is simply incapable of the Grant-like goofiness the film requires of him. Given the character's line of work, Harrison Ford may have been the happy medium had the role been available twenty years later: Indiana Jones and the Hittite Microdot.

But lest we single out Peck for abuse, let's add that Sophia Loren doesn't exactly achieve comic genius here. Since we're supposed to spend most of the film questioning her affiliations, it's hard to know whether to root for or against her, to laugh at her antics or merely be baffled by them. Sadly, on this occasion it simply isn't enough to just look at her. Her chemistry with Peck is inert, though that's probably Peck's fault. It's probably no accident that his most beloved role is a widower. I don't mean to dismiss the man as an actor; his Ahab in John Huston's Moby Dick has been unfairly underrated for a long time. He's just not the man for a lark like this one, though there was most likely no man for this particular lark. Instead of a second-rate Charade it ends up as fourth-rate Hitchcock. Donen doesn't have the acting talent to menace his heroes that he had in the earlier film. Then he had Walter Matthau, James Coburn and George Kennedy. Here he has a gang of fake Arabs, the most egregious being Kieron Moore as a hipster rebel. Their cumulative lack of threat quickly turns Arabesque into a cinematography appreciation session, though, as I said, after a while even the appreciation stops. I'm glad to champion style over substance when the style is deserving, but here the imbalance between overplanned images and insubstantial story is itself ungraceful. As an unfunny comedy it enters the realm of the truly bad. It's unfortunate, because it's the sort of film I'd like to like. The one thing I do like about it, I suppose, is its innocently condescending portrait of Arab politicians in business suits whose intrigues against each other have nothing to do with religious fanaticism, from back in the day when "Islamism" would have been a meaningless word and someone like Sophia Loren could embody a race's vivacious, thoroughly secular modernity. That part only seems like a fantasy in retrospect.

Anyway, the theatrical trailer has a lot of the imagery I would have screencapped. IAmOnlyLove copied it from TCM, and I copy it in turn here.

This has always been a favorite poster of mine, I keep it over my desk! Great write-up as usual.

Mark, I find Peck's pose a little goofy but the art is nice.