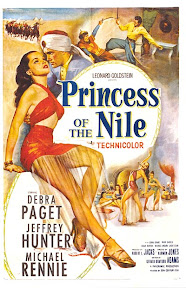 In the early 1950s, Twentieth-Century Fox, the home of Cinemascope, released films from a company called Panoramic Productions, which were filmed in the old standard ratio. Fronted by Leonard Goldstein, Panoramic drew on Fox contract talent who may have felt themselves slumming against their will, if Harmon Jones's pseudo-historical quasi-epic is any indication of the run of the mill. Princess of the Nile is the sort of film nearly every studio felt obliged to make in those days: the relatively cheap programmer set in some colorful but not too well known period of history. The setting this time is not the Egypt of the Pharaohs or of Cleopatra, but the Islamic Egypt of the exact year 1249, albeit an Islamic Egypt where people still worship "Mother Isis." Egypt's ruler is a subject of the Caliph of Baghdad, but has grown dependent on Bedouin mercenaries led by a general named Rama Khan (Michael Rennie!) and a spiritual leader called "the Shaman" (Edgar Barrier). Yes, they're Mongols in all but name -- even their costumes are more Mongol than Arabic, but for the usual arbitrary Hollywood reasons they're Bedouins, and they're making life miserable for the common folk. Egypt's plight has come to the attention of Prince Haidi (Jeffrey Hunter), a typical beardless Arab prince of the era -- the 1950s, that is. More importantly, it's come more obviously to the attention of the Princess Shalimar (Debra Paget), who sets herself up Zorro style (the movie even uses Mark of Zorro music occasionally) as a fighting tribune of the people. Only, while Zorro puts on extra clothes -- a mask, a cape, a hat -- to do his righteous work, Princess Shalimar takes her off to assume the identity of Taura, the rebel dancing girl. Believe you must that such a female could rally the pious masses of medieval Egypt. If Mother Isis wills it, can you prove it didn't happen? With the help of Prince Haidi and such typical Egyptians as a low-billed Jack Elam and an unbilled Lee Van Cleef, and a dwarf, Taura does indeed inspire a revolution against Bedouin hegemony, though he pals do most of the heavy lifting for her.

Let's face it. Princess of the Nile is the sort of film a studio orders you to act in. For someone like Michael (Klaatu) Rennie, it might look like a break from benign typecasting, but he makes a bland villain despite backup from an always welcome Michael Ansara. For Jeffrey Hunter, this was dues paying of the sort Tony Curtis and Rock Hudson were doing at Universal in similar material, and it was apparently part of a studio effort to make him and Debra Paget into a romantic team. But it's Debra Paget's show; she's the only reason imaginable for anyone but a camp completist to sit through this mostly uninspired claptrap. If anyone went to this movie in the summer of 1954, it was to see her do some sexy dancing. The gossip columnists made it known that one of her scenes had to be edited after complaints from the Breen Office; what was left could be presumed to skirt the edge of acceptability. What remains does seem pretty risque for 1954. Paget could do the exotic dance bit, as she would prove again several years later in Fritz Lang's Indian Tomb. For Harmon Jones and Panoramic Productions she goes just one step beyond what she'd do for Lang. In Princess of the Nile she's the title character and nominal heroine of the picture, and for one short, wonderful, ahead-of-its-time moment she and the filmmakers live up to the potential of that role. That's when, in the middle of a brawl between Prince Haidi and some Bedouins, she picks up a sword while wearing her skimpiest costume and fights.

Princess of the Nile is currently available on-demand from the Fox Movie Channel. For those without access to that service, Northbreed1 has created a highlight reel of Paget's performance. The big dance number starts at approximately 4:23, and Taura's fight scene starts around the 7:29 mark. Harmon Jones doesn't really do the opportunity justice, and the swords are pretty ridiculous, but it's the thought -- Debra Paget, Action Hero -- that counts.

Posted by Samuel Wilson at 9:46 PM

Great flick, this one, Sam. Paget is definitely the reason to stay focused on the film even when the film becomes a bit mundane as the heroes repeatedly go back to the same places over and over. Just a few years later and Chelo Alonso would create a very similar firestorm in the pants of many a male moviegoer shaking her moneymaker in movies like SHEBA & THE GLADIATOR and THE PIRATE & THE SLAVE GIRL.

venom, your mention of Chelo Alonso (I remember her best from Goliath & the Barbarians) reminds me to mention that, apart from Paget, the quality of pulchritude in Princess of the Nile is shockingly poor. Paget's handmaidens are a tacky looking lot, but perhaps the idea was to make the star look even better by comparison.

Paget definitely had enough to go around. This one is definitely getting the DVD-R treatment once I get a new DVD recorder. Now if Fox Movie Channel would only air SODOM & GOMORRAH again.....