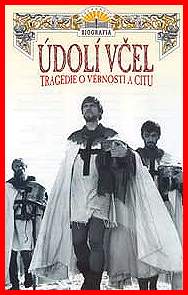 The Film Society of Lincoln Center held a Frantisek Vlacil festival earlier this month, showing New Yorkers little-seen works by a little-known and thus underrated Czech director who was active from the 1960s through the 1990s. A number of the films sounded interesting, and some have been highly touted on blogs I read, but the weather being what it's been, I didn't feel like making the trek downstate to see them on the big screen. Fortunately, I consoled myself with a reminder that I had one of Vlacil's medieval movies in my Netflix queue. It arrived in my mailbox this weekend. It was worth the effort.

In Vlkov, the Bohemian valley of the bees, the lord of the manor is getting married. It's his second marriage, at least, and the bride is practically a child, not much older, it looks, than the lord's son Ondrej. The boy is, perhaps understandably, resentful of a stranger taking the place of his mother. His idea of a wedding gift to her is a basket of flowers with live bats at the bottom. The insult enrages Dad, who grabs Ondrej and throws him face first into a stone wall. He repents his rage at once, praying for his son's recovery, and promising him to one of the militant religious orders if he does recover. He does.

Ondrej is initiated into the men-only world of a crusading order. He acquires a mentor in Arnim (Jan Kacer), who strikes up an acquaintance while the boy sits contemplating the sea, in the nude. Whatever Arnim actually does, I'm sure Vlacil means us to be creeped out a bit about this. Even is he represses any physical expression of his obvious feelings for Ondrej, Arnim's longings and eventual jealousy seem obvious enough.

Grown to restless manhood, Ondrej (Petr Cepek, above) sees brothers crack under the pressures of monastic militancy. A renegade asks him to run away with him, but Ondrej sees him recaptured and put to death -- an alarmingly convincing dummy is dropped from a tower and mauled by dogs. In his turn, Ondrej cracks and runs away. Arnim pursues him, hearing reports of a sword-wielding madman wandering the countryside. He helps Ondrej slaughter a band of peasants, only to get cold-cocked while he drinks water at a nearby stream.

Arnim (Jan Kacer) figuratively worships at Ondrej's feet, only to pay for it moments later.
Ondrej returns to the valley of the bees, where his father had long since died. He sets himself up as the lord of the manor, eventually claiming his erstwhile stepmother Lenora (Vera Galatikova) as his own bride. But in a creepy echo of the opening wedding scene, Arnim appears at the gate as young Ondrej had years earlier, and Ondrej steps over the table to confront him as his father had. But he manages to defuse the situation with his new wife's help, inviting the reluctant warrior to stay the night. It's a nice gesture, but not necessarily a wise one....

Lenora and Ondrej try to cheer up Arnim, but some people are incapable of cheer. You can usually tell them by the crusader gear and the crosses on their capes.

Primal passions are in play here, despite the characters' extreme efforts to overcome them. The end products are moments of startling cruelty. Vlacil can get as violent as any of his European peers of the period, and his film is of a piece with films from all over the continent (including the Czech Witches' Hammer) that contemplate or wallow in the brutality of pre-modern life. At least it seems more tasteful in black and white. The cinematography by Frantisek Uldrich offers the starkest contrasts of earthy everyday life and the immaculate austerity aspired to be religion. Invariably, however, the film reverts to violence and moral horror, with religion exacerbating rather than alleviating the upheavals of Arnim's troubled soul.

Armin and Lenora both struggle with unnatural-seeming feelings for Ondrej. The effort doesn't work well for either of them.

For European audiences, I suppose, movies like these might have been the equivalent of hillbilly or "white trash" films in the U.S., in which twisted passions belie a community's simplistic piety. Assigning such sentiments to the backward past may have made Bees palatable to a Communist regime (albeit one in "thaw" mode at the time) that wouldn't be expected to accept the passions here displayed as permanent parts of the human condition. At the same time, church=Party equations shouldn't have been hard for viewers to make, either here or with Witches' Hammer -- though Party censors may not have recognized them as easily. Even with the violence thrown in, however, Bees doesn't feel like the sort of exploitation films I've just compared it to. The violent bits aren't presented as highlights of the show or anticipated with scary editing or music. The music overall aims for an atmospheric rather than an emotional effect, helping ground our sense of place and time rather than any sense of genre. The content may not have been out of place in a grindhouse, but the presentation is arthouse all the way.

I thought the echoing of the first wedding in the second was a bit heavy handed, and the finish was pretty predictable once Arnim was invited to stay, but in sum I was impressed by Vlacil's direction and his construction of a convincingly dingy and decadent past. I'll be willing to give him another try, and now that I know the name, I think my local library may have a copy of Adelheid, the film that followed Bees. If so, my own private Vlacil festival will go on.
Posted by Samuel Wilson at 7:45 PM

It's a shame you missed out on Marketa Lazarova - that film is incredible, and I would kill to see it on the big screen. It is massive in scope, with a number of staggering moments of pure cinematic bliss, as well as a strong comedic undercurrent. Valley of the Bees seems like a Cliff's Notes version of it. To me, Valley of the Bees reminds me most of Japanese samurai films where the swords end up being mere facades for presenting moral conundrums. Marketa Lazarova is far more Andrei Rublev than Harakiri, by comparison. I haven't seen Adelheid, but I hope you enjoy it enough to seek out Marketa Lazarova if the chance comes around again.