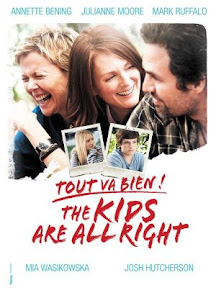 Lisa Cholodenko's film has been nominated for four Academy Awards. It's one of ten nominees for Best Picture, and Cholodenko is up for co-writing the screenplay, but not for direction. It strikes me as a movie that probably wouldn't have made it into the traditional five-film field, though that says less about the film than about the Academy's biases. My own biases would probably argue against a Best Picture nomination. The subject doesn't seem dramatic or momentous enough to suit my sense of cinema as spectacle. On the other hand, other people apply a single standard of compassionate humanism to all media, and a lot of such people are likely to be moved enough by The Kids Are All Right to make a case for it. Our common ground, I'd suggest, is acting. The stars make it a spectacle, though not of glamor. Annette Bening and Julianne Moore have drastically de-glammed themselves to play a middle-aged lesbian couple here, though Mark Ruffalo is arguably glammed up as the laid-back sexy sperm donor who complicates the heroines' family life. Bening and Ruffalo have been nominated for Oscars, while Moore's omission suprises me. If anything, she gives the most showy performance, and gets to make a big speech of a sort, but maybe she came on too strong for some viewers. 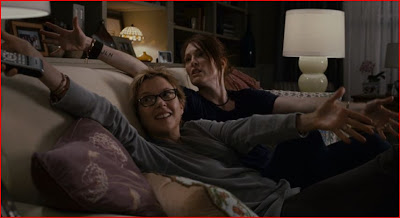 For Your Consideration
Paul (Ruffalo) was the donor for both of Nic (Bening) and Jules's (Moore) children, each woman bearing one. The eldest, Joni (Mia Wasikowska), is preparing to go to college, while Laser (Josh Hutcherson) has dubious taste in friends and a growing curiosity about where he came from. He convinces Joni to call the sperm bank and find out about their "donor," but his name can't be revealed without his permission. Paul is curious about his tangental heritage and agrees to meet the kids. He's a restaurant owner (the place is called WYSIWYG, the name being a kind of warning flag) and organic farmer, but not quite the achiever "Moms" had imagined when reading his profile way back when. Inevitably Paul meets the parents, and as inevitably complications ensue. With perhaps equal inevitability, the complications resolve themselves in time for a sort of happy ending with the family dispersed but also restored. 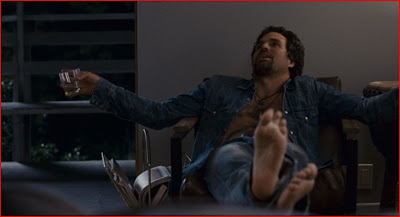 Paul (Mark Ruffalo) is stunned to learn he's a "donor." Below, he meets the kids. 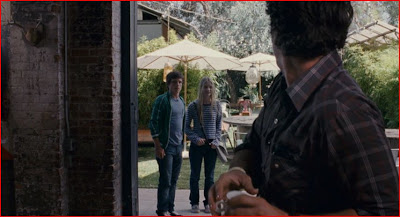 The story asks for trouble by having Jules fall for Paul and enjoy a brief affair, but Cholodenko and co-writer Stuart Blumberg insist that this isn't about gender. Sexual arousal, we're told early, is often counterintuitive. Nic and Jules, for instance, get turned on by "gay man porn," while Laser's discovery of this fact closes a farcical first act during which Moms wondered whether he was gay. For the record, we never know one way or the other. In any event, we're supposed to see Jules's attraction to Paul as more emotional than sexual, though they screw enthusiastically. He gives her something affirmative that Nic, a doctor and a sort of judgmental achiever, can't currently give her comparatively underachieving wife, who sees Paul as a kind of kindred spirit. She insists on her homosexuality all the while, taking out her guilty feelings on a haplessly nosy gardener who offers another possible moral to the story. Jules accuses him of taking drugs, but he attributes his sniffles to allergies. With such allergies, why is he a gardener? Because he loves the flowers, he says. Apply analogies as you please. 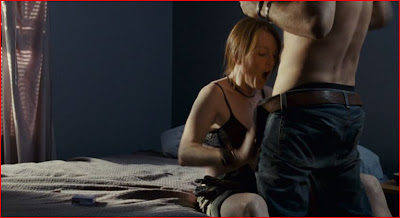 Something felt both right and wrong about the way the story wrapped up. On one hand, the reconciliation of Nic and Jules seems too predetermined, too easily sparked by the big speech about marriage as a marathon that Moore gets to make. There was no way that this film was going to end with the man breaking up a lesbian couple. On the other, I give Cholodenko credit for not giving Paul a soft landing. He falls hard for Jules, breaking up with his hot girlfriend because he wants to take the next step and finally have a family. He burns that bridge only to get Jules's door slammed in his face, albeit by Nic -- though Jules herself blows him off decisively on the phone. While Nic is probably right to think of him as an "interloper," it's hard to think of such a genuinely nice (if thoughtless) guy as a villain, and it feels genuinely sad to see him angry and frustrated, throwing his helmet at his motorcycle, in our last glimpse of him. Maybe the moral for him is that anonymous transactions, even if human beings result, should remain anonymous. 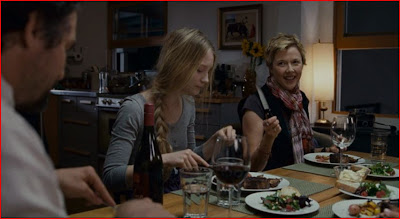 This is the first time I've seen Ruffalo, the next Incredible Hulk, since he made an indelible impression on me in David Fincher's Zodiac. Cholodenko's film gives me a better sense of his range and his ability to keep a questionable character likable. The fact that he seems implausibly like a refugee from the Seventies I blame on the writers. Of the cast, Bening is the one being pushed hardest for an Oscar, though her chances against Black Swan's Natalie Portman don't seem that good. As I hinted earlier, I was actually less impressed by Bening than by Moore. I found Nic a one-note character, a control freak and borderline drunk, though this may be so against type, if Bening can be said to have a type, that it can be seen as an acting triumph. I will give her credit for one great scene, a dinner party at Paul's place where she struggles to transcend her distrust of him by hogging the conversation, effusively praising his cooking and his record collection, all the while waving a kitchen knife to cumulatively menacing effect -- and that's before she goes to the bathroom and finds Jules's hair in his drain. It's a strong performance, but I still say Moore was better. As for the younger actors, the title of the film says it as well as I can.

I've now seen seven of the ten Best Picture nominees. While none of them is the actual best picture I saw from 2010 -- that's still Oliver Assayas's Carlos -- Fincher's The Social Network leads the Oscar field in my book. I'd put The Kids fifth out of the seven I've seen, ahead of Inception and Black Swan. That may not sound like a high ranking, but it's at least an honorable mention.
Posted by Samuel Wilson at 11:10 PM

I was also more intrigued by Moore in this movie. Her performance made me think of real people I knew, while Bening reminded me of other movie characters I'd seen. Bening didn't have the force or energy that Moore had.

Agree with you Samuel that this film would not have made a five film Best Picture category. Still the performances by Bening and Moore are highlights plus a script that is intelligent, extremely funny without exaggerating its characters to the extreme. Bening’s character is insecure about aging while Moore is a bit of flak. They both come across as real people anyone of us could know.

I agree with a lot of your thoughts regarding THE KIDS ARE ALL RIGHT -- notably with regards to Julianne Moore's Oscar nomination omission (and perhaps at the expense of Annette Bening). Also, it's not just the subject that doesn't seem dramatic or momentous enough for me but, rather, the film itself as well.

I think it didn't help my viewing of the film that I saw it a few days after learning of it having won a Golden Globe for Best Motion Picture (Comedy or Musical) and in the wake of viewing THE GIRL WHO KICKED THE HORNET'S NEST which really impressed (as did THE GIRL WITH THE DRAGON TATTOO -- though THE GIRL WHO PLAYED WITH FIRE less so).

I find Cholodenko's treatment of men in her films fascinating and disturbing, though I worry feminists will take what I say the wrong way. I always hate when a bland straight guy breaks up a lesbian couple in the movies, like Kissing Jessica Stein, but a lot about KIDS is, as I discussed in a recent Bright Lights article, a bit "camp-conservative"

The film was even more revered by the New York Film Crtics Circle, who showered three major awards on the film: Anette Bening, Mark Ruffalo and the Stuart Blomberg and Lisa Cholodenko's screenplay. This is an exceptional drama with (as you note) superlative performances all around, and it's curious that Moore was pretty much taken for granted by the critics and the Academy. Cholodenko's HIGH ART was one of the two or three greatest gay-lesbian themed films ever made, and in that film she also inspired some great work by the actors. THE KIDS ARE ALL RIGHT barely missed my own ten-best list, but I would have no problem at all if it got into the top five nominated films. I quite agree with you on the dinner party scene! Outstanding review as always.

Thanks for writing, everyone. The more I think of Moore's omission, the more I'm inclined to blame it on familiarity. Bening doesn't act often enough to be as familiar. Moore is more or less always recognizable as Moore, while Bening has the liberty of vanishing into a good role whenever she gets one.

KC, I thought Bening brought force to her role, but the role itself seems too simplistically conceived for her performance to have the same vitality Moore's has.

John, it's certainly a superior Hollywood film and I agree on the absence of exaggeration. Bening's performance isn't exaggerated, but the script is somewhat stacked against her, though ultimately forgiving.

YTSL, I'm in self-questioning agreement on the film's lack of "moment." I lean toward more ambitious films like Carlos, Social Network and even King's Speech, but I'll admit that I can't objectively relegate Kids to a lower rung because it's less historic. For some viewers Kids' content is the stuff that really counts in movies.

Erich, I definitely see your point about the "conservative" family-values aspect of the film; it's probably why the ending feels predetermined for me. I think Cholodenko strives to make points about gender, sexuality and character, as when both Paul and Laser are called "fags" basically for being decent people. She allows for transgression, but family ultimately trumps it.

Sam, Kids would probably make it in at the bottom of my 2010 top ten right now, but I've still seen relatively few films from last year. I haven't seen High Art, either, but from what you and Erich say about it I probably ought to.