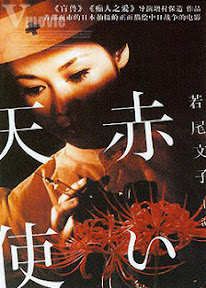 The Rome-Berlin-Tokyo Axis probably inflicted more misery on more people over a wider expanse of territory in a shorter time than any team of nations in history, but the impression you sometimes get from movies is that the Tripartite Pact made war sexy. The Fascist Italians, Nazi Germans and Japanese militarists violated more than borders, if you get my drift. The Japanese are credited, if that's the word, with a "Rape" of an entire city, and the term is probably not entirely figurative. All three powers seemed dedicated to cruelty as a matter of principle, and world cinema eventually sexualized the Axis's ideological sadism. The Italians notoriously deflected blame from themselves by making a genre's worth of Nazisploitation, from Salon Kitty to The Beast in Heat -- though Pier Paolo Pasolini managed to tell tales on his own people in Salo before they got him. I'm not aware of the Germans themselves exploiting their past in the same way, but there may have been laws against it. Meanwhile, the Japanese took the lead in self-criticism, laying bare such offenses as cannibalism in the ranks in such films as Kon Ichikawa's Fires on the Plain and Kinji Fukasaku's Under the Flag of the Rising Sun. In Red Angel director Yasuzo Masumura deals with the sex angle of the war.

Red Angel is a curious film for an American to watch. Its serious-minded juxtaposition of war and sex takes it close to camp territory, but I don't know if the Japanese themselves have such a category that would make the story seem laughable in any way. As it is, Masumura and his writers have a provocative point to make about masculinity in wartime that shouldn't be dismissed by the seemingly soapy elements of their narrative.

The film is the story of Sakura Nishi (Ayako Wakao), a Japanese military nurse who follows the troops to the Chinese front. The overall tone is set early when she's raped by hospitalized soldiers while doing her night rounds. When you think about it, stuff like that probably happened in all armies during the war, but the Japanese may be unique in addressing the subject on film. Throughout, the Japanese soldiers are characterized by sexual yearning or frustration that handfuls of captive "comfort women" can't satisfy alone. Their aggressiveness barely veils an eventual realization that war, for many the supposed proof of masculine virtue, is unmanning Japanese males. Nishi sees this in the plight of an armless patient. Doomed to isolation from the home front lest he demoralize the public, he protests that he's still a man, but can't do anything to relieve himself in any sense. An extraordinarily compassionate Nishi helps him out and shows him other kindnesses. He rewards her efforts by killing himself, knowing that no one else will ever show him the same regard. As far as Nishi's concerned that's the second soldier she's killed. The first was one of her rapists, whose death she blames on herself despite insisting on heroic measures to save him lest anyone think that she let him die to avenge herself. She'll put more deaths on her conscience before the film is over.

Nishi (Ayako Wakao) fends off one soldier's advances (above), but proves more friendly when a double amputation makes another fighter less grabby and more needy (below).

Her most charged relationship is with the troubled Dr. Okabe (Shinsuke Ashida), a dedicated surgeon who cracks under the pressure of endless meatball surgery and becomes a morphine addict. Need I add that the addiction renders him impotent. Nishi makes it her special task to get Okabe off the drugs and restore his manhood, alleviating his withdrawal with lovemaking. Okabe rises to the occasion after all, but the lovers' triumph comes with a strange role reversal. Nishi appoints herself Okabe's commanding officer and puts on his officer's uniform, ordering him to put the boots on her feet. It's a fleeting fantasy, but it can't help but make a point about the power women could or should have in a situation of mass male sexual dependence. It also signifies that Nishi, in her fashion, is a better soldier in her sense of duty and the measures she'll take for the sake of her compatriots than any of the men.

Red Angel is a film of unsettling intimacy, a M*A*S*H without the laughs, sex and amputation side by side. Thank goodness it's in black and white; the monochrome cinematography helps Masumura keep his tenuous balance of tone. Even without the red stuff, it's still pretty gruesome as legs come off and limbs are dumped into a bucket. At the same time, it's a woman's war picture if there ever was one, and if that still seems strange, that may be because the emotional content and intimate concerns of women's films are artificially excluded by generic convention from most war pictures. Men remain sexual creatures, after all, and for whatever reason -- maybe one that has something to do with their use of "comfort women" during the war -- the Japanese seem more willing to address that fact than other filmmakers, or at least more willing to address it in a serious fashion compared to the Italians and other purveyors of Nazisploitation. It may still be hard for some viewers to take Red Angel entirely seriously, but it's honest enough in its portrayal of wartime brutality to justify an honest effort on our part.
Posted by Samuel Wilson at 11:00 PM

Excellent review, Sam. I've just ordered this film after reading your sterling write up. This looks to make a great companion piece with BLIND BEAST.

"Angel is a curious film for an American to watch. Its serious-minded juxtaposition of war and sex takes it close to camp territory, but I don't know if the Japanese themselves have such a category that would make the story seem laughable in any way."

Samuel, I erred at WitD and confused this film with another work. As we both know Masumura is hardly a humanist, (the central character represents the one element that is) but one who uses charged themes, especially sex to inform on a rather perverse underpinning. Nothing of his of course can match BLIND BEAST, but the role of the central character here is most definitely borderline campy, and the film's austerity is mitigated by this bizarre current, which may not be so perverse in Japanese sensibilities. Kobayashi himself orchestrated the excellent black and white photography, and the film's amutation scenes are tough to watch, though this is a walk in the park in this sense when compared to BLIND BEAST, which is nonetheless more abstract and expressionistic.

Hmm, two votes for Blind Beast. And Sam J., while I know Masumura somewhat by reputation, Red Angel is in fact the first of his films that I've ever watched. I guess Blind Beast'll have to be the second.