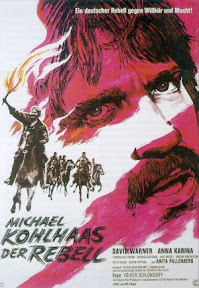 Volker Schlondorff's adaptation of Heinrich von Kleist's 19th century historical novel about a 16th century rebellion in Saxony is a relic of that strange time when Hollywood was willing to try its luck on practically anything. American producers bankrolled a German crew working in Czechoslovakia with an international cast, including some Rolling Stones hangers-on (and according to legend, Keith Richards himself as an extra) and while IMDB says it opened in the U.S. in May 1969, I can't find evidence of that initial American run, under either its original title or the alternate rubric, Man on Horseback. It received its American TV premiere as a CBS Late Movie in December 1972. Kohlhaas doesn't seem to have played theatrically in New York until 1980, after Schlondorff had earned some notoriety as the director of The Tin Drum. In a way, it's a typical film of the 1969-71 period -- idiosyncratically ambitious and an absolute commercial disaster in America.

Kleist's story may be more familiar in an altered, Americanized form as the tale of "Coalhouse Walker Jr." in E. L. Doctorow's novel Ragtime and the Milos Forman film. Since our setting is 16th century Germany, we're dealing with horses rather than cars, of course, and race prejudice isn't an issue. Class is, instead. Michael Kohlhaas (David Warner) is a horse breeder bringing some animals to a regional fair. To his chagrin, the local Junker, von Tronka, demands that Michael show a pass before carrying his animals through Tronka lands. Kohlhaas has never before heard of such a requirement and begs leave to get the proper paperwork on his way to the fair. The Junker demands that he leave two of the best horses as collateral, and one of Michael's men agrees to stay and look after the animals. From the regional authorities, Kohlhaas learns that he doesn't need a pass at all; the Junker had just been messing with him, because he could. Returning to von Tronka's estate, he finds his horses in a decrepit state and his man missing. The man had been beaten and driven away by Tronka's men, it turns out, who had then left Kohlhaas's horses to rot. The Junker is glad to be rid of the beasts, but Kohlhaas now insists that Tronka feed and groom the two horses at the Junker's own expense before returning them. This Tronka will not do.

Michael and his wife (Anna Karina) argue over how far to take the complaint, but Frau Kohlhaas finally decides to present a petition to the Elector of Saxony (Anton Diffring). For her trouble she is trampled by a horse during a procession, and she is brought back dying to the Kohlhaas farm. Rebuffed by nobility at every turn and given a runaround by lawyers, this is all Michael Kohlhaas can stand -- he can't stands no more. He gathers some men and burns the Tronka estate, though the Junker himself manages to escape. Michael's band soon becomes an army of brigands, gathering up army deserters, mercenaries and other misfits as he chases Tronka across Saxony. For him, this remains a matter of honor; he'd be satisfied if the stupid Junker would finally take care of his damned horses. But for Kohlhaas's new followers, the campaign is an opportunity for plunder. In time he has enough of an army to take entire towns, which become targets for sack and rape. He himself refuses to play the role of bandit king. When he learns that one of his lieutenants had raped a woman trapped in a pillory, who subsequently died when a burning roof fell on her, Kohlhaas has the man hanged.

Michael is willing to negotiate an end to the uprising if only Tronka can see reason. With no less a personage than Martin Luther acting as intermediary, Kohlhaas surrenders his arms to the Elector, who's preoccupied with a Polish invasion. While he stews in effective house arrest, and Tronka continues to stall, the mercenary starts a new rampage, calling himself Kohlhaas. While the real Michael has an airtight alibi -- he's under constant guard, after all -- the authorities hold him responsible for the mercenary's depredations and deem him in breach of the truce. At the final hearing, Tronka finally produces Kohlhaas's horses, good as new. But after he's sentenced to be broken on the wheel for taking the law into his own hands, Michael sets the animals free.

Like Julian Buchs' A Bullet for Sandoval, this ostensibly more prestigious production is a story in which a righteous man's revenge far exceeds his original grievance. Unlike the more stylized spaghetti western, Kohlhaas is a stark, grimy history play in the manner of the Czech directors on whose territory much of it was shot, as well as Schlondorff's "New German Cinema" movement. The two films have in common a generic continental concern of the period with the cruelty and injustice of history, the injustice in either case guaranteeing an excess of cruelty when victims finally lash out. In Kohlhaas the excesses of rebellion take Schlondorff close to spaghetti territory, especially in the town-sacking scene, during which Stanley Meyers' score is suddenly enhanced by dissonantly anachronistic electric guitars while Michael's less reputable men run amok. This turn of the rebellion toward viciousness and outright crime probably came as a rude surprise to those original viewers who may have seen Kohlhaas's movement building into some sort of proto-hippy youth uprising after the deserter (Michael Gothard) and his doxy (Anita Pallenberg) are introduced. What looks like an idealistic feud, and remains one in Kohlhaas's own mind, is quickly corrupted. Because Michael himself remains incorruptible, it's perhaps inevitable that he ends up paying for everyone else's sins in a suggestively gruesome finale. That sort of finish sets apart the more artistically ambitious "history of cruelty" films from spaghetti westerns, which usually allow their antiheroes to go out, if they even lose, in a blaze of glory, with their boots on, etc. The history-of-cruelty films prefer to emphasize the inexorable power of Power, the inescapable embrace of injustice, even if Michael Kohlhaas is allowed the symbolic grace note of freeing the horses.

The international cast and crew can't avoid a certain stiltedness in the proceedings, but as the film grows more action-oriented this becomes less of an objection. Schlondorff's refusal to invest the story with the romantic fervor which I'll tentatively presume is in Kleist's original is sure to alienate many viewers, but it negatively invests the film with an authentic naturalist feel. I saw it on the Vutopia on-demand channel, which is available free to Time Warner Cable subscribers who carry any premium movie service. While Vutopia lists Kohlhaas under a category of "Subtitled Cinema," it's version is actually the English dub with the actual voices of Warner, Diffring and others. The fullscreen image is apparently a faithful rendering of the original film's 1.37:1 aspect ratio. I may be inclined to overrate Michael Kohlhaas because of how well it seems to fit into this little subgenre of my invention, but if that type of movie interests you as well, and you have the patience to appreciate the relatively affectless presentation, this harsh little rarity is probably worth your time.
Posted by Samuel Wilson at 10:31 PM

"The international cast and crew can't avoid a certain stiltedness in the proceedings, but as the film grows more action-oriented this becomes less of an objection."

Interesting Samuel, and I know the cinematic bankrupsy of this late sixties period you attest to here. The same qualities you describe in the above excerpt were present in Anthony Mann's THE HEROES of TELEMARK. Yes, the absence of a kind of 'romantic fervor' would doom any chances for a commercial success, though you rightly acknowledge 'the authentic naturalist feel' that results. I appreciate all the thematic connections to A BULLET FOR SANDOVAL, but I'm sorry to say I haven't seen either of these films. (I'll momentarily be reading your review of that film, which I see preceeded this one). I do think highly of Schlondorff of course, though it's clear he was on auto-pilot here, much as Hawks was in the still-entertaining LAND OF THE PHARAOHS.

Sorry to hear the version you watched is dubbed, but was heartened to read your summary conclusion that this rarity is still worth a look-see.

Your voracious appetite for off-the-radar cinema performs a great service to the devoted cineaste, most of whom will be in the dark with this one. Your work in reconstructing the plot here is really superlative.