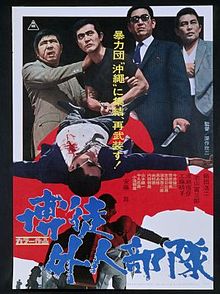 No two Kinji Fukasaku yakuza movies that I've seen are alike. To say that any one of them is just another yakuza movie, or that he wasted his time making yakuza movies -- before he stopped making them, that is -- is to miss the point. Fukasaku could work the genre for a wide range of moods and nuances. For this effort, early in his tremendous run of Seventies crime sagas, his subject is a different kind of disillusionment than we identify with his myth-debunking tales of criminal cynicism, inhumanity and dishonor. Sympathy for the Underdog (the Japanese title has something to do with gamblers and foreigners) is about man's inability to recapture or recreate the past -- and it throws in a little of The Wild Bunch in for good measure.

Koji Tsuruta (right) as Gunji
As is often the case, we open with a con getting out of prison. Gunji (Koji Tsuruta) has served ten years for his role in the gang wars on the docks of Yokahama. While he was gone, a corporatized yakuza clan, the Daitokai, moved in, played the smaller local gangs against each other, and eventually took over. He gathers his old cronies together -- each of them is introduced with a vignette showing their miserable civilian lives -- to make a run on the Daitokai, but the war is over almost before it began. Gunji's gang is hopelessly outnumbered and outgunned, and survives to make an honorable withdrawal only because the Daitokai bosses respect Gunji's guts. To avoid bloodshed, they agree to contribute the ridiculously large amount of 5,000,000 yen toward a memorial for Gunji's former gang boss. That money will finance Gunji's next venture, elsewhere.

The way Gunji sees it, there's only one place that's as wide open now as all Japan used to be back in the early postwar days. That's the island of Okinawa. As the original Toei trailer informs us, the U.S. was just about to turn the island back over to Japanese administration, creating the opportunity Gunji sees. His gang will muscle their way onto the island and take over from some of the small timers there.

For the "mainlanders," Okinawa is a doubly alien land. For starters, the natives don't seem to care that much for mainlanders. Secondly, the island is practically the 51st State, supporting a huge American base and servicing its soldiers and their dependence. Most of the signage Fukasaku shows us is in English, and there are lots of American faces, male and female, white and black, on the streets. Ironically, such an Americanized setting serves the same role for Fukasaku that Mexico serves for the makers of American and Italian westerns: a last frontier of outlawry, where a dying generation of outlaws can make a last stand.

The Okinawan opposition: GI gangstas (above) and Tomasaburo Wakayama (the Shogun Assassin himself, below)

Gunji scores some victories over karate-fighting Okinawans and gun-happy Americans while his men suffer casualties along the way. His biggest obstacles are Yonatal (Tomasaburo Wakayama), the "one-armed giant," and his stupidly reckless cousin Jiro (Kenji Imai). They outnumber the mainlanders, but here as in Yokahama, Gunji's grit convinces them that wiping him out isn't worth the blood. In this case, thanks in part to their capture of Jiro and their honorably unconditional release of him, Gunji's crew ends up with a territory of their own, including a lucrative operation selling whiskey smuggled off the American base. They set up headquarters in a luxurious compound. But they don't seem to enjoy it. They seem like penned-in animals sometimes, and sometimes they just seem bored. They don't know the local lingo and can't understand the songs. Gunji himself strikes up a tepidly obsessive relationship with a local prostitute (Akiko Kudo) who looks a lot like the moll who left him while he served his time. He wants the whore to be his girl so badly that we find ourselves waiting for a big revelation from her -- but it never comes. She's sympathetic, but she can't be what he wants.

The fruits of victory, from swimming pools (above) to women (like Akiko Kudo, below), somehow aren't as sweet as Gunji hoped.

The gang is already demoralized by the time Daitokai makes its move on Okinawa. The big clan arrives with bells and whistles and banners flying, like an invading army or the circus come to town. While some of the locals quickly accommodate themselves to the impending new order, Yonatal prepares to fight. He expects Gunji to take Daitokai's side as a fellow mainlander, but is impressed to learn that Gunji hates them, too. Each side thinks about an alliance, but before the thoughts can find expression Daitokai strikes swiftly and wipes out Yonatal's gang. There's nothing to do, it seems, but negotiate another peaceful exit, and Daitokai still respects Gunji enough to fork over another five million. That's still good traveling money, but where's the gang going to go? If they've learned anything in their adventure, it's that there's no place they can go to recreate their Yokahama of ten years ago. Okinawa really is the end of their trail. So after a pensive night, once again it's "Let's go," and "Why not?" in some rough Japanese translation. Daitokai's holding another one of their silly ceremonies to welcome the oyabun to Okinawa. Dozens of them will be there, along with their Okinawan quislings. There is one last place to go, after all....

A mood of melancholy gradually descends over the picture in its second half that sets Sympathy apart from the other Fukasakus I've seen. The movie seems to build toward complete anticlimax before the story takes its final Peckinpavian turn, but it gains gravitas as things slow down. Fukasaku is best known for his almost calligraphic approach to violence, his ability to send bodies flying and blood flowing like brushstrokes of pure mayhem. But he's just as capable of more quiet, moodier moments. A sequence here in which the prostitute explains the meaning of an Okinawan "migrant worker" song to a brooding Gunji while one of his cronies rages at the performer, urging her to play a Japanese song, is one of the director's finest moments. The music itself is worthy of note. Takeo Yamashita isn't Fukasaku's usual composer, and he gives Sympathy a richer, more diverse musical palate than most of the director's or the Toei studio's films of this period, combining jazzy sounds and Euro-style vocalese with austere Okinawan elements like the folk song. The cast is uniformly good; few of the characters are merely caricatures, and Koji Tsuruta is especially good at suggesting hidden depths beneath a no-bullshit exterior. It's not true that Fukasaku could do no wrong during the Seventies, but the more I see of his work, the more I regard him as one of the decade's most consistently superior directors. Sympathy for the Underdog is only further proof of that point.

This English-subtitled trailer, featuring plenty of Yamashita's great music, was uploaded to YouTube by pvehling.

Posted by Samuel Wilson at 9:40 PM

Excellent review....
I'm tempted to start picking up some of these movies.

"A mood of melancholy gradually descends over the picture in its second half that sets Sympathy apart from the other Fukasakus I've seen. The movie seems to build toward complete anticlimax before the story takes its final Peckinpavian turn, but it gains gravitas as things slow down. Fukasaku is best known for his almost calligraphic approach to violence, his ability to send bodies flying and blood flowing like brushstrokes of pure mayhem. But he's just as capable of more quiet, moodier moments."

Expert and descriptively vivid examination of Fukasaku's directorial essence. I have not seen this paricular film, but well-know some of his other work. i.e. "Under the Flag of the Rising Sun," "The Green Slime," "Battle Royale." I believe he also directed the Japanese segments of "Tora! Tora! Tora!) Seems like -based on more than one reference- that the spectre of Peckinpah hovers over the film.

I don't have this one, Sam, but do have the Yakuza Papers box and a couple other of his gangster pictures. What I've seen has been good, but I've yet to be completely taken with the Japanese gangster films just yet.

Andrew: Don't let me stop you! Probably the best individual films to start with (as opposed to the five-part Yakuza Papers) are Cops vs. Thugs and Yakuza Graveyard.

Sam: For a long time, regrettably, Fukasaku was best known in the U.S. for The Green Slime and his involvement in Tora, Tora, Tora, but Battle Royale really inspired a wholesale reappraisal of his work. Under the Flag of the Rising Sun is a strong anti-war film that shows that Fukasaku was more than a yakuza specialist. He could also do period subjects, with Yagyu Clan Conspiracy/Shogun's Samurai being an outstanding example.

venom5, I'm satisfied that you find them good. I rank Fukasaku alongside Fernando di Leo and Umberto Lenzi as great crime film directors but a lot of subjective factors go into any ranking. I couldn't say right now whether the Japanese or Italian films are better.

I've seen a lot of your reviews of fukasaku's films and I was curious have you seen "Japan Organized Crime Boss" from Fukasaku? I recommended you checked that one out that film has a somewhat similar theme to "Underdog" and has almost the entire cast from this film even Bunta is in that film.