On the Big Screen: THE ILLUSIONIST (L'Illusioniste, 2010) 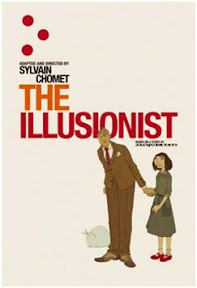 Jacques Tati is France's greatest comedy director. He's also considered the only true heir of the great American slapstick comedy tradition, which itself was derived to some extent from the work of an earlier Frenchman, Max Linder. Tati made talking pictures, more or less; a lot of the dialogue in his features is gibberish, particularly that of his own signature character, Monsieur Hulot. Usually portrayed as an inventor or at least a tinkerer, Hulot cuts an awkward figure in a world modernizing beyond anyone's control. In time, Tati's comic vision expanded beyond the focus on Hulot as a uniquely dysfunctional bumbler. In his later features, Playtime and Trafic, modernity makes everyone look silly and Tati's social vision becomes all-encompassing. The style can be off-putting; it may even look like a lack of style, while the films can seem to be about nothing, when they're really about everything. They require and reward attentive viewing. Playtime, in particular, may be my favorite French film. But like Buster Keaton, Tati gave in to a temptation to gigantism, though his vision may have required it. Playtime lost lots of money and bankrupted Tati, and he never fully recovered. He died with a final screenplay, Confusion, unproduced. 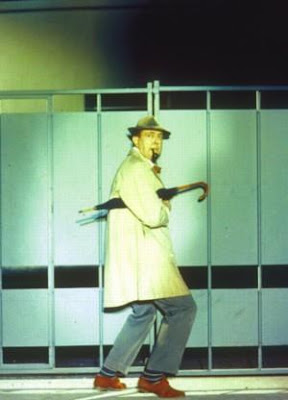 Jacques Tati was usually rendered in caricature in the advertising for his films. Turning him into a cartoon character was probably a natural next step. 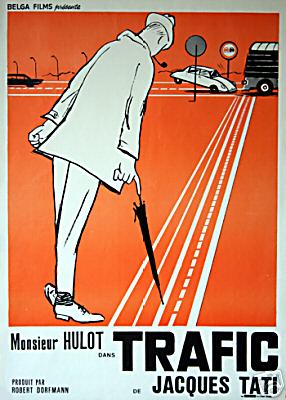 Unless someone takes up the challenge of Confusion, Tati's final screen utterance now becomes a screenplay he wrote and abandoned in 1956, as interpreted by animator Sylvain Chomet. According to biographers, Tati was apparently working out some family issues through this screenplay, which would have had him playing a character quite different from Hulot. He put it away to make another Hulot film, Mon Oncle, which became his greatest global hit. Chomet has revised the 1956 screenplay to set it in 1959, the time when the real Tati was at the peak of his fame, while his cartoon analogue, the magician Tatischeff (the comedian's real name), is near the end of his tether. Chomet even has a scene in which Tatischeff briefly blunders into a theater where Mon Oncle -- the real film, in live action -- is playing, just so he can stage an eerie moment in which the filmed Tati on the screen within a screen appears to recognize and react to the appearance of the cartoon Tatischeff in the movie house. The choice of time seems to be Chomet's comment on the contrast between the troubled Tati who wrote the original Illusionist script and the triumphant onscreen Tati of roughly the same period.

Leaving Tati's biography aside, there's a more obvious and more stark contrast here for his fans and fans of the comedy tradition in general. Assuming that Chomet's adaptation faithfully reproduces what Tati wrote, the comedian isn't just not doing Hulot; he's doing someone else. He's doing Charlie Chaplin. 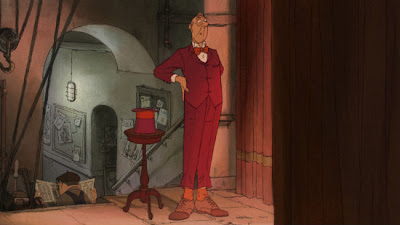 Specifically, of course, Tati wrote for himself the role of a mediocre French magician (calling him Tatischeff is presumably Chomet's idea) who's wandering further and further afield in search of an audience. In Chomet's version, Tatischeff travels to Great Britain, where he suffers numerous professional humiliations. In London, he closes a bill headlined by a ludicrous rock band; by the time he takes the stage, all the teenyboppers have departed, and he performs for a bare handful of bored patrons. At some sort of prom concert, he's upstaged by a Scottish drunkard. The drunk befriends him, however, and helps arrange some gigs in his home country. In the drunk's home town, Tatischeff is upstaged by a new jukebox, but he makes a heroic impression on Alice, an adolescent ragamuffin barmaid. When Tatischeff decides to try his luck in Edinburgh, a starstruck Alice runs away to join him. A reluctant Tatischeff allows her to share an apartment with him, devoting most of his meager income, either from his act or from odd jobs he's compelled to take on, to buying her new clothes and other treats. They stay at the Little Joe Hotel, operated by two midget brothers and catering to the dregs of show business: a suicidal clown; an alcoholic ventriloquist; three inane acrobats. For Tatischeff, the dwindling opportunities to ply his craft grow more humiliating. He's finally reduced to conjuring women's accessories in a department store window, while Alice grows enamored with a promising young man, one with whom Tatischeff realizes her real future lies. But she probably won't take that route unless Tatischeff quits her life once and for all....

However much Chomet has tinkered with the script, The Illusionist inescapably reflects the influence of Chaplin's 1952 film Limelight on Tati. In Limelight Chaplin is a washed-up vaudevillian who becomes a mentor for a suicidal ballerina. The sixtysomething Chaplin flatters himself enough to imagine the girl having a crush on the old man, whose renunciation in favor of youth takes the indirect form of death on stage at a moment of redemptive triumph. Tati/Chomet strips the Limelight formula of the romance (and the mortality) while adding a City Lights inspired litany of amusing odd jobs for Tatischeff to perform for the girl's sake. Illusionist aims at Chaplinesque pathos in a way Tati never does in his Hulot movies, but achieves something closer to the bleak, self-pitying pathos of Harry Langdon, refusing to offer audiences the uplift of never-say-die perseverance on the metaphorical road of life. It ends, not with the clown-hero's apotheosis, but with utter defeat and the promise of nothing but oblivion for the protagonist. This is a comedy with the moral, "Magicians do not exist." It's so funny I forgot to laugh.

Actually, I laughed quite a bit at the slapstick parts of the picture and the moments of period parody. On top of that, I admired the audacity, impossible to imagine in America, of someone making such a soul-crushing spectacle the subject of an animated cartoon. Better still, The Illusionist is a triumph of old-school line animation, though there are several obvious CGI assists along the way. As an artist, Chomet has made a beautiful film. As an animation director, he has created a wonderful homage to Tati. The cartoon Tatischeff is hardly an exaggeration of Tati's own physical schtick. The real Tati was a tall man with storklike legs and a rocking, off-balance gait. Were he to come to a sudden stop, you'd worry that he'd fall forward on his face. Chomet nails this. The other characters seem artistically rather than generically conceived and realized, as far from Disney as you could want. Whatever Tati's intentions, Chomet turns The Illusionist into a showcase for the narrative power of animation. Because so much of the dialogue is Tati-esque gibberish, Chomet can't depend on the glib jokiness on which even the best American animation relies to keep audiences interested. What I'm getting at is, I'm not sure what people who know nothing about Jacques Tati will get out of Chomet's film -- most likely they'll find it a colossal downer, if an extremely pretty one. But as far as I'm concerned, as a technical and artistic achievement it just knocked Toy Story 3 off the throne I'd put it on. That film is still a tremendous effort in its own right, but The Illusionist is the best animated film of 2010 -- though it has about nil chance of beating the Pixar for the Oscar -- and one of that year's best movies of any kind.
Posted by Samuel Wilson at 8:55 PM

I'm anxious to see this, but I really struggle with Tati's films. I watched Mon Oncle last night and struggled to find very much to laugh at. A few chuckles early on as the boys prank a few drivers into believing they've wrecked, but otherwise I really ached for the thing to end. That aside, great write-up as usual.

I have not seen this, but you spark my interest! Very fine job.

I notice my blog is in your blog list. Thanks! I have returned the favor.

"Better still, The Illusionist is a triumph of old-school line animation, though there are several obvious CGI assists along the way. As an artist, Chomet has made a beautiful film. As an animation director, he has created a wonderful homage to Tati."

This is true, but I do not see this film as worthy of the high placement you have given it Samuel, and it is in large measure a downer. It is nowhere near TOY STORY 3, nor MY DOG TULIP or HOW I TRAINED MY DRAGON either. The film is often static, there is no emotional connection to the redundant gags, and as a huge Tati admirer and devotee, I found it in good measure unsatisfying, a position that was accentuated by a second viewing. I have loved Chomet's past work (especially THE TRIPLETS OF BELLVILLE) but here I was disappointed, though I'd still go with 3.0 to 3.5 of 5.0 on the strength of the points you make here is this admittedly extraordinary review.

Mark, Tati is definitely an acquired taste and acquiring it isn't obligatory. The Illusionist has to stand or fall independent of its association with Tati, so I hope you'll like it better than Tati's own films.

Mykal, I've long respected your blog and I thank you for listing mine on it.

Sam J., as you may know by now, a downer is not a demerit for me. Chomet's bleakness is so daring given his medium that I can't help but applaud it. But while I found every frame of Illusionist ravishing to look at I wouldn't be surprised if some viewers get impatient with it as they might with a Tati film. Toy Story 3 is a very close second for me now among 2010 animations, while I haven't seen those other cartoons just yet.

In the "feel good" society of 21st century America, I'm not surprised by people not being turned on by "downers". I would guess that, coming from France, both Tati and Chomet were influenced by the writings of Camus as well as familiar with existentialism.

I've noticed that many French films seem to almost require a familiarity with existentialism and, to a lesser extent, with absurdism to actually understand and appreciate fully.