A BULLET FOR SANDOVAL (Los Desperados, 1969) 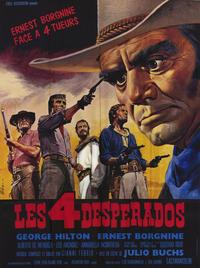 Perhaps we should tie spaghetti westerns generically to those Euro-historical films from the 1960s whose typical subject is the cruelty of the past, so that films like Sergio Leone's can be discussed alongside stuff like Valley of the Bees or Witchfinder General as well as alongside American westerns with which the Italian and Spanish films often have less in common thematically. I don't know enough about the history of historical films in Europe, but it looks as if by the mid-Sixties there was a major trend away from romantic, heroic or patriotic visions and toward a common concern with violence, injustice and overall backwardness. Placing spaghettis within this trend, or crediting them as progenitors of it, occurred to me this weekend while watching two films from 1969: Volker Schlondorff's Michael Kohlhaas (about which more later) and Julio Buchs's revenge western (with which VCI's DVD box requires him to share credit with an unbilled Lucio Fulci). Both films deal with presumably honorable men whose grievances escalate more or less out of his control (more in Kohlhaas, less here) into a sweeping bloodbath that destroys many arguably undeserving people. The movies share a paradoxical endorsement of revenge as the nearest substitute for justice in unjust times, yet can't help deploring the seemingly inevitable collateral damage that results.

Sandoval has one of the most utterly downtrodden heroes of spaghetti westerns. John Warner (George Hilton) is a Confederate soldier compelled to desert on the eve of battle when one of the Sandoval clan, an aristocratic Hispanic family that dominates the border country, informs him that patriarch Pedro's daughter is about to give birth to Warner's child in the midst of a cholera epidemic. With two comrades Warner absconds, escapes after recapture, and finally reaches the Sandoval estate, where a coldly furious Pedro (Ernest Borgnine) informs him that the child is alive but the girl is dead. Pedro pushes the baby into John's clueless arms and sends them both away.

Still accompanied by one of the deserters, Warner wanders from village to village, desperately seeking milk for the baby, only to be turned away everywhere from fear of the cholera. Along the way, the two Rebs earn the company of a "lay brother," aka a rogue monk, but he can do nothing but pray for the starving child and help bury it when it dies. At the little grave, Warner vows universal vengeance.

Retracing his steps, Warner raids one village by stealth to get weapons, then drowns the selfish patriarch in a bucket of milk. Armed, he soon acquires followers, the ideal number being six -- "like the bullets in a gun." They terrorize the border country while Sandoval and other local leaders call upon Confederate military assistance.

Sandoval also hopes to resolve the matter in a one-on-one showdown with Warner, but his overzealous sons make such an honorable encounter impossible. The Rebel army at least compels Warner and his crew -- with shifting personnel -- to seek refuge in Mexico, and for a while both he and Sandoval seem content with the stalemate. But when Sandoval crosses into Mexico for a religious festival (with bullfighting) Warner can't resist the opportunity to take final revenge, unaware that larger forces are closing in for the kill....

Banditry rather than gunfighting is Sandoval's subject. Buchs and/or Fulci thus avoid the conventional shootouts of spaghetti westerns, preferring to tell the story with creative editing. The director cuts away before the supreme moment of a dramatically staged showdown in the rain between Warner and one of Sandoval's sons, to show us instead how Sandoval's people get the news of the result. Earlier, when Warner's men attack a town, the director takes a minimalist approach, reducing the battle to close-ups of hands shooting guns until some of those hands loose their grips.

The film wraps with a visually striking armageddon finish in the middle of a bullring with an audience of dozens of soldiers and Warner's gang in the place of the bulls. It's more a Butch Cassidy than a Wild Bunch finish, but since all three films appeared in the same year, maybe Sandoval took its cue from Bonnie and Clyde instead. The various visual tricks and the story's stark refusal of any idea of redemption lift Sandoval above the average of spaghettis and link it, I think, to the kind of theater of historical cruelty that was playing in other European (and American) cinemas at the time.

Also helpful, need I add, are an intense performance by Hilton and an authoritative one by Borgnine. Whether he thought he was slumming or not, he's all pro here and hits most of the right notes. He's sometimes saddled, however, with hopeless expository dialogue, and the hopelessness of it derives from the film having more bandits than it knows what to do with. While the film is known as "The Four Desperados" in some markets, the U.S. really made a big deal of "six, like the bullets of a gun," even though some of Warner's gang have but the sketchiest of personalities, and the turnover in personnel makes the supporting bandits seem even more irrelevant. In short, the film could be neater in its opposition of Warner against Sandoval without superfluous characters, but that flaw doesn't compromise its overall effectiveness. You may not like it if you need to see someone win, but the Sixties and Seventies seemed more open to the nobody-wins argument, and if you feel an affinity with that generation and its movies, you should appreciate if not enjoy A Bullet for Sandoval.
Posted by Samuel Wilson at 6:18 PM

This is one of my favorite Euro westerns. I posted a review of it last June. Hilton's best performance in my opinion, especially in light of all the comedic westerns, or less serious performances he ended up doing. The films ending reminded me a lot of the type of thing Chang Cheh had been doing (and continued doing) in his films a few years prior.

I think the Fulci association is just a rumor. I recall an interview (I don't recall who it was) that stated he had zero involvement with the film and there's no mention of it in Steven Thrower's exhaustive 300+ page book 'Beyond Terror-the Films of Lucio Fulci'. There's an index of his directed efforts and an index of films he did other duties and aside from the film being mentioned in the actors index under George Hilton, sole director credit is given to Buchs.

Although I refused to buy it, I wouldn't doubt it if Fulci's alleged involvement wasn't spread by one of the MANY falsehoods from Thomas Weisser's much maligned spaghetti westerns book.

Great review as always, Sam, and it's good to hear you enjoyed the film. A great cast of Euro genre regulars, too.

I'm glad to read in the comment section here that the implied association with that master hack Fulci is questionable. Don't get me wrong, I did think DUCKLINGS was a very good giallo, but with garbage like ZOMBIE, it's clear he's no better than Jess Franco. Your excllently written review here (ex. -"The movies share a paradoxical endorsement of revenge as the nearest substitute for justice in unjust times, yet can't help deploring the seemingly inevitable collateral damage that results.") brings another rarity under the microscope, and a further exploration of the Euro-western. It's good to see that there's a fine VCI DVD of it out there; I'll have to check that out.

Don't be mean to Zombie, Sam J. That film tickles me. There's a certain kind of viewer for whom a fight between a zombie and a shark is some kind of epiphany. Fulci also directed at least one decent western, Massacre Time, while I've yet to see his later Four of the Apocalypse. Among his horror films, The House by the Cemetery is potently horrific, but his much-vaunted The Beyond left me cold.

Samuel, I own both HOUSE and THE BEYOND, the latter in that Anchor Bay tin limited edition. The opening of THE BEYOND is horrifying, but then it settles into the formulaic arc. LOL on what you say about ZOMBIE there!!!