At Last: A Sequel to THE ROOM 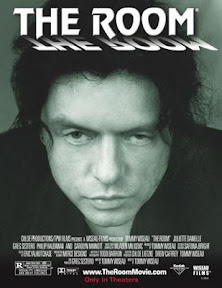 Because reality is stranger than fiction, the only possible follow-up to Tommy Wiseau's The Room (2003) comes from real life. Wiseau's vanity production is widely regarded as the worst movie of our time, if not of all time. I still haven't seen it, but reports have been pretty convincing. This achievement should be cause for shame for all involved, you might think, but there's money to be made from bad movies these days, whether they're deliberately bad or not. The Room is a success as a cult film and presumably sells well on DVD. So Sandy Schklair wants a piece of it. He was script supervisor for the picture, but Entertainment Weekly reports that he now wants to be recognized as the director of The Room. He called the shots whenever Wiseau was in front of the camera, he claims, at least for the first month of production.

"I will never give this guy credit," Wiseau tells the magazine, "If I put you on the set right now and I said to you 'Cut' and 'Go' and you expect me to give you credit as a director? Are you kidding me? That's laughable, my friend!"

Schklair tells a different story, claiming that Wiseau asked him, for all intents and purposes, to direct the film, only to insist, "I am director!" before affirming that he wanted Schklair to direct. To read more, for now, you have to buy the February 18 issue, since the story isn't online yet. I hope this goes to court. Mel Brooks himself could not imagine something this absurd, but it's definitely the stuff of cinema. Whether this story would make a bad movie or a good movie depends on your point of view -- and your talent, I suppose.
Posted by Samuel Wilson at 12:04 AM

Wait - I thought that guy blew his brains out at the end. You mean it wasn't real? What kind of crap is that? The only reason I watched that stupid movie was to see the guy blow his brains out. I feel like a class a chump now...

Everything about this movie entertains me--from the actual flick to all the stories around it. It is the definition of the gift that keeps on giving.